The weekend is a full one with the Pahrump Balloon Festival topping the list of activities. The event is set for a kick-off party at the Pahrump Nugget beginning at 4 p.m. today. See the schedule on this page.

There are other noteworthy activities scheduled as well.

A band which played at Paddy’s Pub last weekend will be at the Maverick Friday and Saturday, March 7-8, from 8 p.m. until midnight. “Playground” has been together since 2008, and like the local bands, these Las Vegas musicians migrate. All the members have played with other groups in Las Vegas.

Band founder Johnny Lust moved to Henderson in 2005, put the band together and said, “it’s been a way fun time ever since.”

Lust is the drummer and also sings. He has played with “Dizzy Bitch,” “Creature” and “Snailhead.”

“I have also been a member of Ian Mitchell’s Bay City Rollers and Dale Bozzio’s Missing Persons,” he said.

Guitarist / singer Jeff Duncan is from the band “Odin” and currently plays with “Armored Saint,” “DC4” and “The Bones.” Bassist / singer Scotty Griffin has played with “Hookers N Blow” and “Nawgahide.” Currently he plays with “L.A. Guns” as well as Playground.

Lust said, “We’re a tribute band to the gods of metal.” The group plays music from “Kiss,” “Van Halen,” “AC/DC” and “Black Sabbath.” “We understand the Maverick crowd likes country and we do some of that, too.”

Playground also holds a weekly event in Las Vegas called “PLAYGROUND Live Band Rock-aoke” that gives the community the chance to perform with the real rock stars of PLAYGROUND live on stage.

For more information, you can find Playground on Facebook at www.facebook.com/playgroundrocks.

The Pahrump Valley Museum will host its lecture series tomorrow and honor the building of the nation’s nuclear defense.

Two speakers will make presentations. One is with the Patriot’s Remembrance Quilt, which will be on display at the museum. The other speaker spent 27 years working for the Nevada Test Site. The lecture begins at 1 p.m.

The Poetry &Coffee group headed by John Salacan and Asya Ivanova has found a new location for its monthly meetings.

The group, which met at the former Off 160 Coffee House has moved its venue to the Town Diner, 1440 E. Highway 372 across from Big O Tires. The meeting is from 10 a.m. to noon tomorrow.

There is entertainment once again at the Amargosa Opera House. Pianist Carl Friberg has put together a new show he calls “Ticklin’ the Ivories” He will take the stage at 2 p.m., Sundays on location in Death Valley Junction.

Friberg is an accomplished jazz, pop and improv musician who has composed musicals both on and off Broadway. He has also written jingles for commercials and had his own jingle company called “MADMUSIC.”

Mike Hickey is hosting a jam session from 1 p.m. to 5 p.m., Sundays at the HUBB. Musicians and vocalists are invited to join the gathering.

The deadline to get tickets for the Court Appointed Special Advocates Crab Fest is today. The event is scheduled for 6 p.m., March 15 at the NyE Communities Coalition, 1020 E. Wilson Road.

There will be a pick-a-prize raffle and a live auction.

The event raises funds to support CASA’s work with children in the foster care system.

The Shadow Mountain Community Players have announced a casting call for Oscar Wilde’s “The Importance of Being Earnest.”

The plot is a sort of self-portrait of Oscar Wilde’s reaction to the aristocracy of his own peers. Director Laurie McCaslin said the play is “a dry British comedy” and Wilde himself called it a “trivial comedy for serious people.”

McCaslin said there are nine parts, four women and five men, with ages ranging from 20 to 65. “We need technicians, too. This play will be staged June 13 and 14 at Sanders Family Winery and we need extra stage hands to move the sets. We can use help building them, too.”

SMCP is always looking for new members. The troupe stages five plays per year and McCaslin had to cancel the holiday play for Path of Hope Food Bank in 2012 because “no one showed up to audition.”

She says with so many plays, and travel and vacations she can’t plan on everyone in the troupe being in every play. “I don’t want them to get burned out, either,” McCaslin said.

The Shadow Mountain Players just finished raising $1,400 for Path of Hope with six performances of Agatha Christie’s “The Mousetrap.” 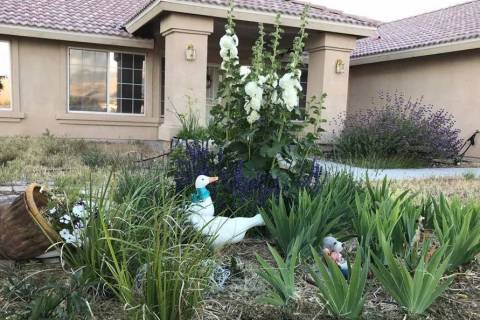 IN SEASON: Creating a showy flowerbed display with hollyhocks as the main attraction
By Terri Meehan Special to the Pahrump Valley Times

A few years ago, I was renting a small home in Las Vegas with a kitchen window that looked out over the backyard of several neighbors. It was tough economic times and most of those homes were in foreclosure. The backyards were a bit of an eyesore but there was one exception, a yard filled with a miniature meadow of tall stalks filled with colorful delicate flowers.

IN SEASON: Part III: Seed saving made simple for home gardeners
By Terri Meehan Special to the Pahrump Valley Times

Gov. Steve Sisolak, the Nevada State Treasurer’s Office and the Governor’s Office of Economic of Development on Wednesday announced an additional infusion of $20 million in to the Pandemic Emergency Technical Support grant program, which opened for applicants Monday.

IN SEASON: Part II: Seed saving made simple for home gardeners
By Terri Meehan Special to the Pahrump Valley Times

Note: This is Part 2 of a three-part series

IN SEASON: Part I: Seed saving made simple for home gardeners
By Terri Meehan Special to the Pahrump Valley Times

Note: This is Part 1 of a three-part series

IN SEASON: Carrots, a kaleidoscope of colors, sizes and shapes
By Terri Meehan Special to the Pahrump Valley Times

Carrots are a pretty inexpensive vegetable to buy at the grocery store, and for this reason many gardeners do not grow them. I like to grow them because they come in beautiful varieties and can fit easily between other vegetables in the garden. That space would not be used otherwise so I like to make good use of it.

With the Nevada State Horseshoe Pitching Association championships in Tonopah just weeks away, Pahrump pitchers have been getting ready by competing in both NSHPA-sanctioned tournaments and the more informal backyard series tournaments.