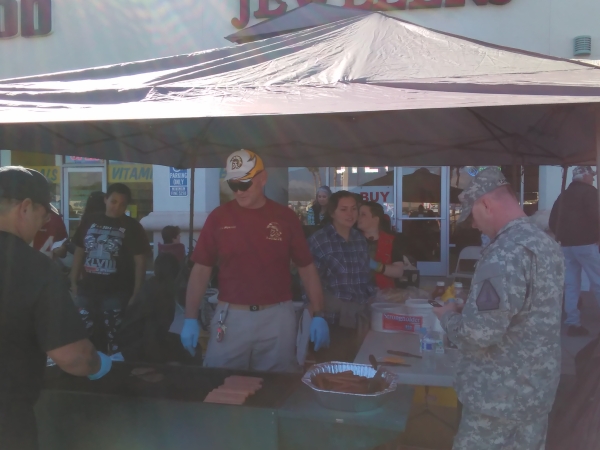 George and Cindi Vroenen had a difficult time navigating through the front entrance of their G.I. USA business early Monday morning after Saturday’s Veterans Day observance.

The problem, Cindi Vroenen said, was the generosity of those who attended the ceremony.

She said the event also served as a collection spot for the upcoming holiday’s Toys for Tots program.

“We couldn’t get inside our store this morning because the entrance was so full of toys,” she said. “A representative from the United States Marine Corps League Toys for Tots program came by on Monday and they filled an entire SUV with donated toys and that was really, really nice because we weren’t even expecting it.”

Vroenen said it was just one veteran who got the ball rolling when he noticed the collection box was sitting near empty.

“We sold toys outside starting at $1 and people were buying but they weren’t filling up the box quite as fast as we hoped,” she said. “One of the Army veterans offered me $100 to put toys inside the box and as soon as word got out, another veteran matched the contribution and gave $110, Lt. Col. Patrick Nary from the Pahrump Valley High School Junior ROTC program came up with $115 and a Navy gentleman from the VFW said he’ll beat that and he offered $120. It got to the point where everyone in attendance was handing over tens and twenties and buying toys for the Toys for Tots donation box.”

Roughly 1,000 veterans and their families made the ceremony, including local veteran Jose Tellas, a Marine combat veteran.

“I served in Vietnam in 1965 till the end of 1966, and I went back in 1969, and came home in 1970,” he said. “I think this event is wonderful and one of the things I see now, is how people are becoming more receptive to veterans. Back when I was serving there was a little turmoil over Vietnam but they got over it and we are very proud. There’s a lot of guys here who are wearing their purple hearts and other decorations and they are all heroes to me. At present, my grandson is serving and he just got back from Iraq. He’s a pilot and flies the Apache helicopters with the army. My oldest son is retired from the Air Force, so we are a military family.”

Bieger served four years at Nellis Air Force Base as a security policeman.

His father, a World War II veteran, served in the Navy.

“This event is great and I love it,” he said. “The community really needs to do more for our veterans because it seems like all Washington wants to do is cut our benefits back, so this is good when people come out to show some support for us. My father was one of the original Navy Seabees and they built the air strips and airfields on the islands throughout the Pacific.”

Vroenen, meanwhile, said she was pleased with the camaraderie on Saturday, which gave veterans the opportunity to share stories and talk about their respective missions.

Additionally, she said a few homeless veterans also attended the ceremony and were provided assistance by members from various veteran organizations.

“We had a few people come by and the Disabled American Veterans helped the homeless veterans,” she said. “They made sure the men had plenty of food to take with them. The Nye County Emergency Services fire chief from Station 51 was here helping to cook while his wife did all the drawings.”

Preparing the food was none other than the leader of Pahrump Valley High’s JROTC program, LT. Col. Patrick Nary, who is fluent in Arabic.

Nary also spoke about the ROTC program’s ongoing commitment to the local community.

“We always try to help out in the community and we actually got a very generous donation by Corrections Corporation of America to help offset the costs associated with this,” he said. “I brought out a lot of the cadets in the ROTC program. It’s great that the community came out and paid tribute to the veterans who have served in the military over the decades.”

Members of the high school’s Key Club were also on hand during the ceremony for the toy drive.

Advisor Reva Braun said the students were excited to volunteer their time for the event.

Braun too, had a son stationed aboard the Harry S. Truman aircraft carrier, who was also at the ceremony.

“We are out here supporting our veterans and we like to do that any way we can,” she said. “Right now we have between 25 and 30 members in the Key Club. A nice lady came by and dropped off a whole bunch of toys. She’s from a local church but I’m not sure which one. We need more of these kinds of events to say thank you to our veterans. I don’t think they are appreciated as much as they should be.”

Vroenen noted the event brought in additional business to her shop, as veterans took advantage of a few specialty items.

“We did pretty brisk business on the inside, where we have $25 leather vests that we sold and customized,” she said. “Russell Avirett owns the antique 1935 red Dodge pickup truck and he comes to all of our functions and provides the PA system. The camaraderie on Saturday was really, really wonderful.”