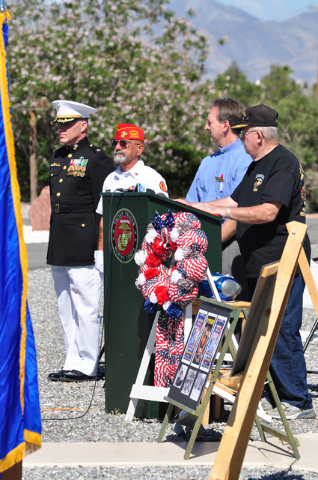 Purple Heart Day recognizes those who have been wounded or killed by the enemy during battle.

Aug. 7 is the day in 1782 when then-General George Washington created the Badge for Military Merit, the forerunner to the Purple Heart.

Pahrump resident Jerry Dumont, a Marine Corps veteran who served during the Vietnam War, was a two-time recipient of the medal and was wounded twice during combat missions in that region.

Dumont was wounded during two separate search and destroy combat missions in Southeast Asia after he and his fellow Marines encountered a booby trap back in 1967.

“On two different occasions, we were on company and battalion sweeps searching and destroying the enemy,” he said. “We hit booby traps and it injured several of us, including myself. My injuries were not severe enough to take me out of the field. I was attended to by our corpsman and continued on.”

Just weeks later, the same battalion found themselves in the same situation.

“We were in a different area doing the same type of search and destroy missions and again, someone stepped on a booby trap,” he recalled. “I got shrapnel again but it was on the other side of my body but I was still able to continue on.”

Though his physical wounds no longer affect him, Dumont did say he’s still affected by a disorder nearly all combat personnel suffer from.

“The injuries that I received themselves do not affect me now, but the everlasting injury of Post-Traumatic Stress Disorder still goes on today with me,” he said.

Additionally, Dumont and a friend created the website purpleheartriders.us back in 2009, exclusively for recipients of the award.

“We have several Purple Heart recipients in town, but not all of them wish to join because they do not own a motorcycle or they just don’t want to,” he said. “I am the webmaster and owner of the website; I continue and have maintained that website since its creation.”

Waters was stationed at Da Nang Air Base when the base came under attack by the Vietcong back in 1967.

“We lost a lot of guys that night,” Waters recalled. “I got blown off an F-4 aircraft and my spine was cracked and I got cut up pretty bad when I got to the concrete ramp. I also sustained a broken foot during that attack.”

Though it’s been close to 50 years since he was wounded, Waters said he’s still suffering from the physical effects of his injuries.

“They don’t go away and every now and then my back reminds me of that,” he said. “With my foot, my toes don’t bend like they should but other than that, I’d rather not talk about it.”

Interestingly, at the time Waters was injured, he had just five days left until he could return home.

When he had six days to go, he said he actually boasted by saying that he was leaving Vietnam ‘without receiving a Purple Heart.’

Legend has it that those who have little time to go on the battlefield when their deployment comes to an end, often fall victim to injuries or worse.

“That is so true and I think that we’re more cautious,” he said. “It’s hard to explain. I’ve talked to several other Vietnam veterans and we all say the same thing. We try to say that we are not taking chances and trying to be cautious but it happens quite often where they get killed or seriously injured when they have a short time to go. That’s just the way it is.”

Additionally, Waters said his younger brother made the ultimate sacrifice during the war, when he was killed in action.

He still has his brother’s Purple Heart.

“Because my brother was killed in combat, so I am part of the Gold Star Families,” he said. “He was my younger brother.”

Purple Hearts are normally awarded while the wounded are in the hospital.

Waters said he was bestowed the honor with a parade.

“I had just five days to go and by the time the paperwork was prepared, I was back in the United States and they had to catch up with me,” he said. “When they finally caught up with me, I had already been discharged from the Air Force and I was in the Air National Guard. They had a big parade because nobody in that guard unit had ever received a Purple Heart.”

Earlier this week, Republican presidential candidate Donald Trump was ‘gifted’ a Purple Heart Medal from a veteran while campaigning.

Trump’s response was, “I always wanted a Purple Heart.”

Waters took issue with the candidate, as soldiers, by and large, are never hoping to earn the decoration.

“Nobody going into battle ever wishes they’d get a Purple Heart,” he said. “That’s a least thing on our minds. That’s not a medal that’s awarded for any other purpose than getting wounded or killed in combat. That’s a typical comment from someone who has never served in the military.”