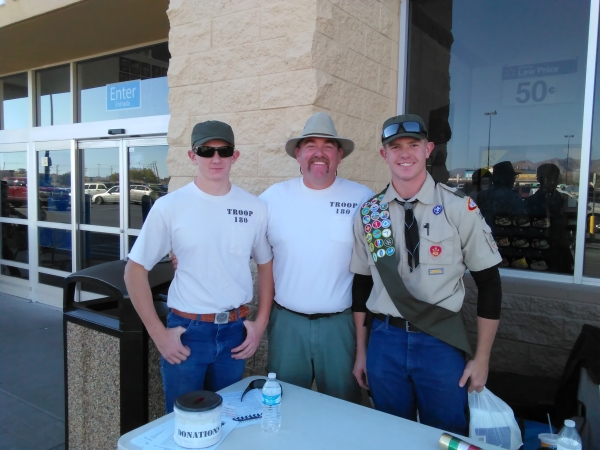 The expression on local resident Jim Medici’s face on Saturday was that of unmistakable pride.

Medici and his son Hunter were staked out at the entrance of Walmart in support of American troops stationed overseas.

The mission was to get as many donated provisions as possible to send to the servicemen and women.

In return, Hunter Medici’s actions would get him one step closer to earning his Eagle Scout badge.

The name of his project is “Stockings 4 our Troops.”

“We are asking for donations for overseas care packages,” he said. “I provided a list of items that we would like to ship, and we also accept monetary donations. This is all organized through Blue Star Mothers of Nevada in Henderson.”

Saturday’s outing proved fruitful, as Medici and company were able to fill 10 shopping carts full of necessities, along with more than $300 in cash at last count.

He received assistance from local resident Elizabeth Enriquez and her husband, who dropped off several items after doing some late morning shopping.

Both said they try to do as much as they can for the military men and women stationed overseas.

“We have a son in the army so this effort hits very close to home,” she said. “He is actually here to spend the Thanksgiving holidays with us, which will make it an extra-special holiday for us. He graduated from Pahrump Valley High School and he’s been in the military now for a little over a year. Fortunately, he has not been stationed overseas. We are also pulling for Hunter to get his Eagle Scout award.”

Hunter’s father, who is the scoutmaster of Troop 180, said it was great to see such a strong response from the community.

“We hope it continues,” he said. “When we first started talking about the Eagle Scout project, his aim was to make a difference and do something for service members and this was the best way we could do that. This is his project that he developed over months of preparation, negotiations and arrangements with the Blue Star moms.”

He also noted that his son could not get approval to send the items himself, which is why he engaged the Blue Star Mothers organization.

“He cannot send care packages, but they can,” he said. “It’s difficult to send stuff to service members directly who are stationed overseas because of security measures. Hunter found the Blue Star moms group and they are the recipients of all of our donations. He’s just out here collecting.”

Hunter, a scout since kindergarten, progressed through the scouting ranks and to date, he’s earned 27 merit badges and held leadership positions as Patrol Leader and Senior Patrol Leader.

Judging from Saturday’s event, he is on schedule to secure his final Eagle Scout rank.

Upon his high school graduation, he will ponder two career options.

“It’s kind of up in the air right now, but I am looking at the United States Navy,” he said. “If it’s not that, I will look into fire service.”

Additionally, he will be playing in the annual East vs. West Blue and Grey All-American Bowl game next month in Dallas.

Next Saturday, he will be at the entrance of Smith’s on Highway 160 from 9 a.m. to 3 p.m. collecting donations.