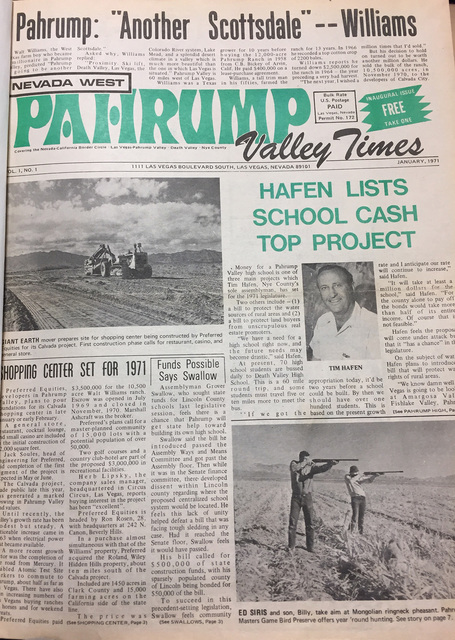 The front page of the first Pahrump Valley Times published in late December 1970. The paper was founded and owned by Milt Bozanic and started as a monthly, growing to a weekly in 1976. It is now distributed Wednesday and Friday. File Photo

Editor’s Note: This is part one of a two-part column based on an interview with Pahrump Valley Times founder Milt Bozanic, conducted by editor Arnold Knightly and Bob McCracken, July 9, 2016.

Milt Bozanic founded the Pahrump Valley Times in December 1970 as a monthly publication; it became a weekly in 1976. The paper began accepting legal ads in December 1979, establishing itself as a paper of record for Pahrump and Nye County.

After it had become a weekly, Bozanic established an office at the Charlotta Inn, located directly across from Saddle West on Highway 160. There an employee took ads and phone calls. Milt points out that, under his ownership, the paper never had a commissioned salesman.

In establishing Pahrump’s first newspaper, Milt demonstrated a pioneering spirit. From the outset, he was betting on Pahrump’s future. Starting with a population of 1,000 people, even with a high growth rate, he notes, you’ve still “got several years of poverty on your part.”

He points out that in 1966 Pahrump Valley had 84 “main phone stations—a house would be a main station.” By 1981, the count had increased to 1,219 — modest numbers to build such a business on.

In explaining why he took the risk of establishing a newspaper so early in modern Pahrump’s development, Milt points out that with all his years selling advertising in the television business, his income became dependent upon his ability to sell advertising to support what he was doing. “I was an independent operator and I understood the risk,” he recalled.

Production of a new edition each week was a one-man show. Milt did all the reporting, writing, and layout. It took all his energy and he never missed an issue. But he realized that he was depleting his reserves.

He began looking to hire a good reporter to help him, someone who could share the workload. Rich Thurlow inquired about a possible job and ended up purchasing the paper in November 1989, through his father.

Milt carried the balance but kept all his production materials ready in case he had to take the paper back. Thurlow succeeded and eventually sold the paper to Stephens Media, which owned the Las Vegas Review-Journal.

When Milt was asked what story stands out most in his 20 years with the Pahrump Valley Times, he replied, “The thing that stands out most is the growth. It’s a remarkable thing to see a place grow that fast.”

Milt believes one of the main factors behind Pahrump’s growth, as compared to Las Vegas’, is that people who prefer a smaller community and a simpler way of life select Pahrump.

Some people prefer to start a business in a smaller community, which offers such advantages as ease of knowing more people and being known.

People can keep track of each other more easily and traffic and parking are not so challenging. Plus, it’s a beautiful valley, he said. Sure, Las Vegas has the Strip, but how many local people go there?

Milt suggested people who move to Pahrump tend to be a little more independent-minded; people self-select for the environment they feel most comfortable in.

Objectivity is an ongoing concern in journalism. The effort to maintain proper objectivity in journalism, as with many other endeavors in life, is not always easy and can involve walking a tight path. The study of history, of course, is typically less than objective.

As Richard Nixon once said, “The judgment of history depends on who writes it.” Both the historian and the newspaper reporter put things in, leave things out, and put an item at the top of the story or at the bottom.

As Milt says, a reporter at Time Magazine once said, “It’s impossible to be totally objective.” Milt remembers he once wrote a story and leaned it “a little bit to the right.” A prominent reader in Pahrump told Milt, “Now, that’s what I call objective.”

Milt Bozanic is one of the pioneers who helped build the modern city of Pahrump. In the 1870s, Joseph and Margaret Yount and their family helped bring civilization to the Southern Nevada desert. The Younts were followed by other pioneers—ranchers, merchants, land developers, educators—the list is long.

Milt sees his role as “being the right person in the right place at the right time,” starting a newspaper when nobody else was taking that on. As he sees it, he laid the groundwork and built the paper up to where it was a saleable product.

When Rich Thurlow bought the paper, he moved the offices into Calvada. The paper was later made into a twice-weekly publication on Wednesday and Friday.

All three papers are owned by the Las Vegas Review-Journal Inc., which is owned by Las Vegas casino owner and billionaire Sheldon Adelson and his family.