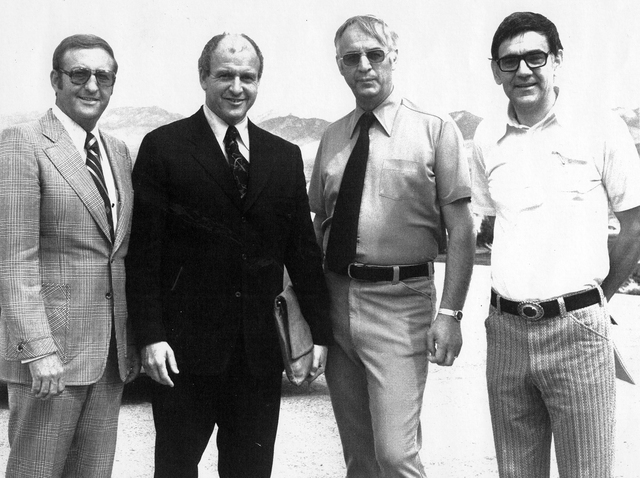 Editor’s Note: This is part one of a two-part column based on an interview with Pahrump Valley Times founder Milt Bozanic, conducted by editor Arnold Knightly and Bob McCracken, July 9, 2016.

A good indication of a town’s future on America’s western frontier was whether or not it had a newspaper. If it did, it might well continue to grow and prosper. If not, all bets were off.

Blessed with an abundance of water and good land, Pahrump Valley was occupied by ranchers beginning in the 1870s. Though ranching thrived, what you would call a real town didn’t take root in the valley until much later. And, of course, there was no local newspaper.

The Pahrump Valley Times was one of the valley’s first newspapers. It appeared Dec. 23, 1970, as an occasional sheet promoting land for sale in southern Nye County. The valley’s population at the time was approximately 1,000 and was on the threshold of the extraordinary boom that created modern Pahrump.

The paper was founded by Las Vegas resident Milton (Milt) Bozanic. Born in Lander, Wyoming, in 1929 and raised there, he attended Kansas State University as a freshman on an athletic scholarship. The next year he transferred to the University of Wyoming. He spent his junior and senior years at the University of Missouri, where he received his degree in the renowned journalism department at that institution.

After graduating, Bozanic went into broadcasting and then into the military, serving three years as a naval officer during the Korean War.

When he got out he was 25 years old. He interviewed at NBC for a weekend program and was told, “Well, you’re a little bit old.”

Bozanic moved to Las Vegas in 1957, when that city’s population was about 50,000. In the booming desert city, he was employed in television advertising sales and hosting movies on TV for more than 10 years.

But he could see what he was doing was not going to last and he was looking for another endeavor.

Bozanic was well aware of the considerable interest in land development in Pahrump Valley at the time. He said that for years prior to starting the Pahrump paper there was a lot of talk about the opportunities in Pahrump land.

“Groups were getting together, buying little pieces of land,” which they would often subdivide, he recalled. In 1963, he ended up owning 40 acres himself.

Despite the growing interest in Pahrump land, Bozanic said, looking back, “Starting a newspaper [in a place] with a thousand people … was kind of a long shot but I did it anyway.”

It was available in Pahrump and other communities in southern and central Nevada, including in Mesquite, Amargosa Valley and Tonopah, where copies were mailed for distribution. The paper’s main market was Las Vegas. Most advertisers were selling real estate—not just the larger companies, but also small operations.

He would also print between 10,000 and 20,000 copies an edition, which Bozanic said was to reach those rural markets.

“It doesn’t sound sensible but in order to actually get a response, you had to get readers,” he said. “And we weren’t faking it.”

The first issues of the newspaper were composed entirely by hand, very different from today, when everything is done with a computer. A little later, Bozanic acquired a “primitive” headline setter that formed the headlines one word at a time.

At that time, he said, “Everybody had a piece of land, especially the farmers, who were land-rich but didn’t have a lot of cash.” Calvada was the big real estate operator in the valley. At first, everyone thought Bozanic was working for them. Ironically, they didn’t advertise in the new paper for the first six months. By then, he said, Calvada could see he was not trying to “do them in” and began supporting the paper.

The first issue of the Pahrump Valley Times had a gross billing of $560.

“The economics were very humble, very modest,” Bozanic recalled. To get by, he was still doing some television work in Las Vegas.

Producing a monthly newspaper, Bozanic said, was a lot like putting out a magazine. You can work at your discretion. But when the Pahrump Valley Times became a regular weekly newspaper, beginning Sept. 17, 1976, it required a completely different work effort.

“You never have a day off,” he said. “There’s always something happening.” Unlike a monthly newspaper, a weekly has to cover what’s going on. And the budget was never sufficient to hire the help that would have made things easier.

Two other Pahrump Valley publications were Desert Living, begun in the summer of 1979 as a quarterly, and the Pahrump Tribune, a twice-monthly that began in October 1979. Both were short-lived.