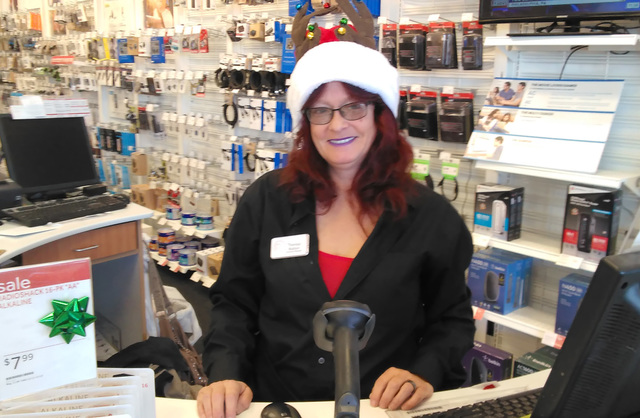 Radio Shack Manager John Dolin and Assistant Manager Theresa Walton, pictured, donated various toys to Pahrump’s Toys for Tots organization just in time for Christmas. The donation is the result of last month’s flood at the retailer which damaged the boxes containing the toys. The toys, however, were not damaged by the water. Selwyn Harris/Pahrump Valley Times

Theresa Walton, the store’s assistant manager, said the items, which were in perfect working condition, would have wound up in a trash dumpster.

“We ended up saving a lot of the product, but we did have some of the boxes that were damaged by the water, even though the product inside was just fine,” she said. “Since we could not sell it, our store manager contacted our regional manager and we were able to donate a good portion of those items to the local Toys for Tots organization.”

Among some of the items were Dark Shadow radio-controlled cars, Dominator drones, and helicopters.

Walton said officials from the organization were grateful for the toy donation.

“We hated seeing the product just go in the trash because that’s where it was going to go,” she said. “We would have shipped it back to the warehouse, and they would have thrown them into the trash. This way, some kids will have a good Christmas. Toys for Tots have helped me out before and I wanted to push John to see if we could do it, because it helped out my family when my kids were younger.”

On the issue of popular Christmas gift items in stock this year, Walton said shoppers are trending towards radio-controlled aircraft and audio components.

“Drones right now are a big item but we also have our Incredibles headphones, which are very popular,” she said. “We also have our maker’s items which are projects that parents and children can build together. It’s about getting things back to family and teaching our kids to build things and work with their hands as well as their minds. Business has been good this year but not quite as good as last year. We are really trying to push the deals and get our customers some good values.”

Back in June, Pahrump Valley Fire and Rescue crews were dispatched to the Radio Shack after a driver plowed through the store’s plate-glass windows causing major damage to products and the store’s interior.