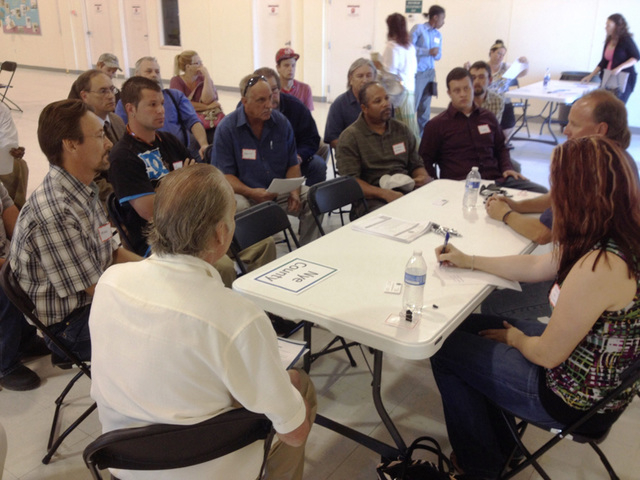 Representatives from Nye County, Mountain Falls, Front Sight and the organization, Aspiring to Justice and Fairness were on hand for the hiring event.

“We had a couple of employers who were looking for people right now for local jobs. One thing they do in Las Vegas when a company is going to lay off a lot of people, they do a rapid response event to provide information on unemployment. We liked the name so we decided to take it in the opposite direction and do a rapid response hiring event. It had a different feel to it because we encouraged people to be there at the same time,” he said.

“There were a couple of hires pretty quickly following the event so it led directly to jobs. We are going to go back and visit with them because they have not come back to us for another one. We could provide another opportunity for the rapid response. I do know that on the day of the event, the employers were very happy with the number and the quality of the people that they had to draw from,” she said.

Vicky Diaz, the Food and Beverage Director at Mountain Falls, said she was very pleased with the turnout and was able to immediately make a hire as a result.

“I thought it went very well. There was probably about 75-plus people who turned out and I received about 25 applications. I actually spoke to some people and networked them into seeking out employment in other areas,” she said.

Wigchers, meanwhile, noted that aside from permanent positions, there were also temporary openings that had immediate openings.

“Nye County was looking for some temporary construction people with experience in carpentry, plumbing, electrical and other trades. They have a big project going on in the Calvada Eye where they are looking for people. They have a 12-unit modular and by the time it gets done, it’s going to be similar to the Health and Human Services administrative building. Instead of just jobbing that out to somebody, they want to try to do as much of the work they can with local residents,” he said.

As far as prevailing wages, Wigchers said it all comes down to experience.

“There were many on-the-spot interviews going on. I talked with all four of the employers and they were all very happy with the people they saw, many of which they plan to reach out to for a full interview. All in all, it went extremely well. I was hoping for at least 45 to 50 people but we had about 75 show up dressed to impress like we encouraged. I know employers were walking out with completed applications with resumes and all four thought it was well worth their time,” he said.

Job Seekers can gain information on the labor market as well as get education and training.

Career counseling and job placement are also provided at the job fair.

“We are now doing them quarterly so the next one will be the second Friday in May. After that, we won’t have another one until August,” he said.

Smith, meanwhile, said those who missed the hiring event should not be discouraged, to still apply for employment.

“Front Sight has a website which may have some information on job opportunities listed there. People can also come to our resource room because if we hear that those jobs are still open they will be posted on our board,” she said.