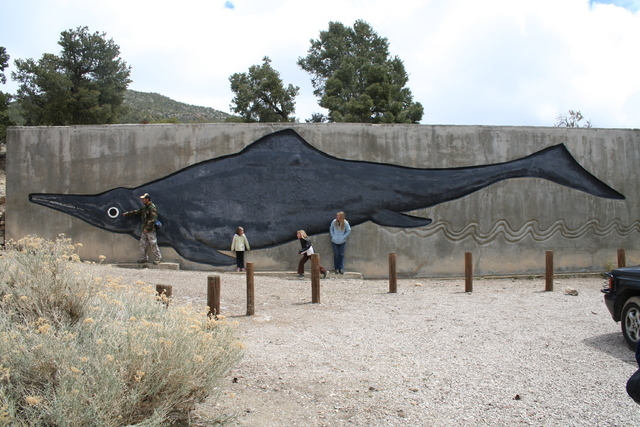 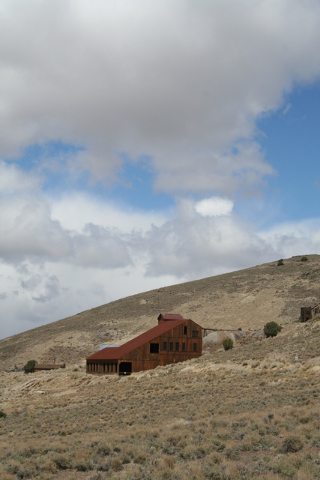 If your summer adventures lead you through western or central Nevada, a side trip to Berlin-Ichthyosaur State Park may be worth a day or so of your time.

For your trouble, you’ll get two park experiences in one — not only seeing rare ichthyosaur fossils, but also wandering one of the West’s best-preserved ghost towns.

The 1,540 acre park lies on the western slope of the Shoshone Mountains, surrounded by U.S. Forest lands. The park was established in 1957 to protect and display the remains of ichthyosaurs, seagoing reptiles that lived about the time of the dinosaurs. Because it’s our state fossil, most elementary school children in Nevada are familiar with the creature, and even know how to pronounce it: ick-thee-o-soar. They can probably tell you that these prehistoric denizens of the deep sometimes reached 50 feet in length, breathed air, and resembled the whales and dolphins of today, even though they are not related.

When you first arrive in the park you will be in the Berlin townsite area, which was incorporated into the park in 1970. The first major ore discovery in this area was in 1863, and led to the founding of Union Mining District. The Berlin Mine was added in 1896 and did pretty well until 1908 when labor disputes and low yields sent the place into decline. By 1911, it was pretty much a ghost town.

But because of its remote location and the protection of the Nevada State Parks system, much more of it remains, after nearly 100 years, than on the sites of many younger ghost towns. The best way to explore the town is to park your car and head out on foot for a self-guided tour. There are more than a dozen buildings and 73 historic sites to visit, many with interpretive plaques to read, along a network of obvious trails. The Berlin Mill building shouldn’t be missed. Take a look inside the windows and you can see some separating tables, a bank of stamps and other artifacts. This mill once housed 30 stamps, a primary crusher, boilers and steam engines.

To visit the ichthyosaur fossils you’ll need to travel about 1.7 miles from Berlin up a well-maintained gravel road to the sheltered quarry. Along the way you will pass through the remains of another townsite, Union. There are 22 historic sites here found along a half-mile trail. But this townsite didn’t fare so well as Berlin, and most are in ruins.

Ichthyosaur fossils were discovered here in 1928 but excavation wasn’t started until 1954. A shelter was built in 1966 to protect the fossils from weathering. The remains are interesting to look at but you’ll need to use your imagination to make what some of them are. With concentration, it’s possible to see skulls, jaws, backbones and flipper bones.

Because the park’s elevation ranges from 6,840 to 7,880 feet, summer temperatures are fairly cool. It’s a great place to camp at one of their 14 sites and some are suitable for RVs up to 25 feet. Each site offers a fire ring, barbecue grill, and covered table. At this time no water is available. There is also a picnic area with tables, grills and restroom located near the fossil shelter.

Fossil shelter tours run daily from Memorial Day through Labor Day at 10 a.m. and 2 p.m., with an additional noon tour on Saturday and Sunday. Tours last about 40 minutes. Call 775-684-2770 for more information.