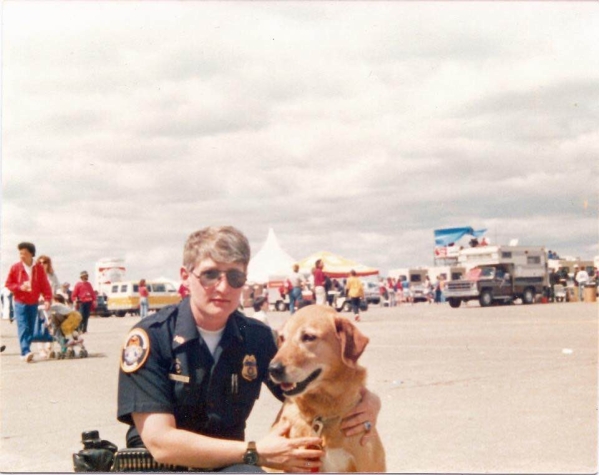 After finding it difficult to land a job in town, a former federal agent took matters in her own hands to gain employment.

“I began working for U.S. Customs back in the 70s and I worked my way up and I spent several years as a K-9 officer for narcotics.”

After her professional career, Zeitlin had to move from San Francisco where she was based out of, to an area which boasts a warm, dry climate.

“I moved to Las Vegas, but I got tired of how big it was,” she said. “So after moving to Virginia to take care of mom and dad, I moved back further out from Vegas to Pahrump. Close enough to be able to use their airport.”

After moving to the area in 2012, Zeitlin found it difficult to land a job when her initial position was cut, so she turned her passion for working with dogs into a business venture.

“I’ve always loved dogs, that’s why I became a K-9 officer,” Zeitlin said. “I had a job here working for the court, doing drug court and things didn’t work out. We lost our budget and I needed a job and even Walmart wouldn’t give me a call back about a job.

“So I said the heck with this, I used to do this in Virginia and I am going to do it again.”

Rebfed K-9 Kare, which opened in 2013, caters to all animals, not just dogs as the name might suggest, as Zeitlin is open to any animal as long as the owner explains what caring for it entails.

“I do in-home pet sitting, it does not have to be limited to dogs,” she said. “I do have somebody that actually called me and asked if I would watch cattle, and I said yeah, as long as you show me what I need to do to feed them.”

Zeitlin has been asked to watch other animals such as goats and pigs and she is open to any other ones that potential customers might need cared for.

Preferring to perform her duties onsite at the animal owner’s home, Zeitlin said it is easier for her, as she would need a license to do so at home and she can’t obtain one due to residential rules, and for the animal as it makes them more comfortable.

“It’s bad enough when you go on vacation and leave the animals behind, at least when they’re in their own home they don’t go through that shock, and feel totally abandoned.”

For an average care visit Zeitlin said she contracts her time to half an hour each visit, but Zeitlin explained she usually spends more time than that with the animals she’s caring for.

“If I don’t have too many animals in one day, my contract says 20 to 30 minutes, but I do try to visit them two times a day and try to be there at least an hour.”

To calm animals down Zeitlin uses a technique that works on children but is not normally used with people’s four-legged friends.

“I read to the dogs, and I’ll read to the cats but I don’t know much about them,” she said. “I know dogs like to hear your voice and they’ll calm down. So I always bring a library book with me and I will sit there and read aloud.

“I’m still enjoying the books and the dogs enjoy my voice and can care less what I am saying.”

K-9 Kare is set to be officially welcomed to the Pahrump Valley Chamber of Commerce with a ribbon-cutting ceremony set to be held Thursday at 11:45 a.m. at Pahrump Photography, located at 830 West Street. Zeitlin hopes the addition to the commerce will increase her customer base and provide her with networking opportunities.

“Hopefully this will generate some business and the chamber has done a lot of good things, not only for me, but for friends and people I have yet to meet,” Zeitlin said. “I kept putting it off, but everything I heard about the chamber is like, ‘wow’, so I went ahead and joined.

Although it is her job, Zeitlin said she would rather associate with animals over just about any person.

“I just enjoy animals,” she said. “I get better conversations out of them than I do some people.”