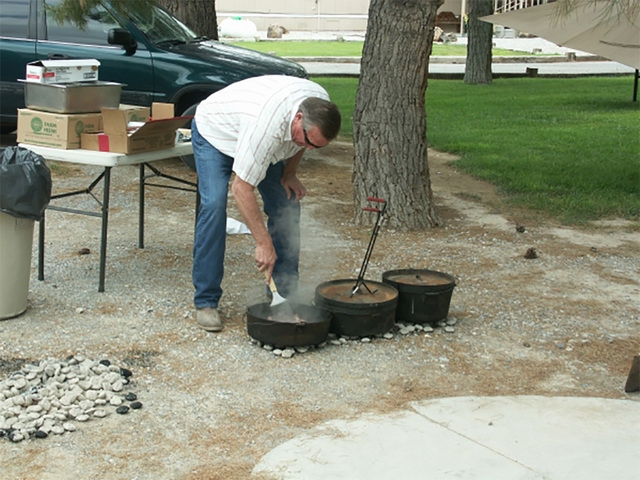 By popular demand, Congressman Cresent Hardy returns to Pahrump today for a community barbecue consisting of chicken and a special Dutch oven preparation.

The congressman is setting up shop at the Pahrump Senior Center today at 11:30 a.m.

Hardy campaign manager Ross Hemminger said Hardy wants to make good on a promise he made last year when he prepared his first community barbecue at the senior center.

“He had promised the folks at the senior center he would come back if they wanted him to do another barbecue for them, which he is doing today,” he said. “It was very well received and well-liked by all of the attendees. So we decided to do it again.”

Hardy is known for his Dutch oven preparations as well as his barbecued chicken recipe.

Hemminger said the entire community is welcome to attend the free event.

“It’s an event that is generally for the seniors and veterans, but anyone is absolutely welcome to come by,” he said. “We want everyone to bring their appetite as well as any questions for the congressman because he will be happy to discuss their concerns.”

As the 2016 general election approaches, Hemminger said the congressman is focused on several important issues relating to residents in the Pahrump Valley.

Additionally, Hemminger said the congressman has a special affinity to rural communities such as Pahrump.

Congressman Hardy really enjoys visiting the community of Pahrump and he loves Nye County,” he said. “It has a special place in his heart and he is very proud of the work that he has done as a congressman.”

The Pahrump Senior Center is located at 1370 W. Basin Ave.