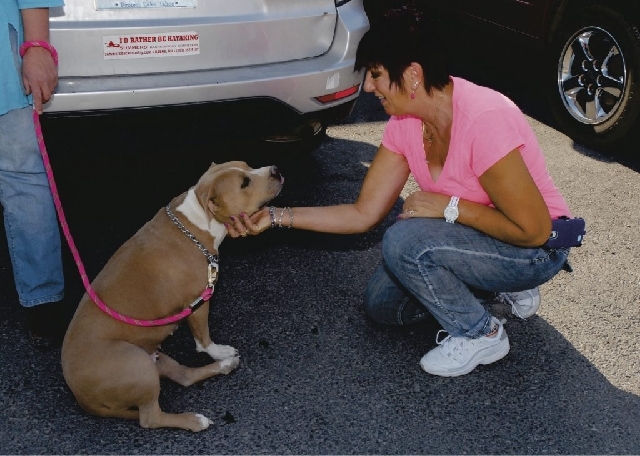 When so many animals landing in rescues end up unadoptable, it’s nice to hear a story with a happy ending.

Symphony Animal Foundation is a no-kill, nonprofit animal rescue with founder Laraine Harper at the helm.

Wednesday, one example of the hard work and commitment to the animals came to fruition as Mya, a purebred pit bull found her forever home in Texas.

Harper said pit bulls get a bad rap. “It all depends on how they are raised,” she said. “If you raise them to be mean, they are.”

She said when Mya came to SAF almost a year ago, the dog was “aggressive.”

“She had never been around other dogs or people. She would get overly excited and lunge at them. That wasn’t a good thing.”

Harper said Mya had to be socialized to other animals and humans, but she still wasn’t “a good neighbor” at the kennel.

“Even though the kennels have walls between them, Mya still couldn’t get along with the neighboring dogs, especially when it came to feeding time.”

Mya went into training. Harper said the shelter volunteers kept working with her and obedience training her until she finally calmed down.

“Now, she’s the sweetest thing,” Harper said. “We’ve all gotten attached to her and now that she’s going home, we’re going to miss her terribly.” Harper said the good-byes were “tearful.”

Because SAF is a no-kill shelter, Mya would not have been put down, but part of the rescue’s work is to find new homes for the pets which come to it.

“We start trying to find a home for animals locally. When we can’t, we start going through other states. If it weren’t for my volunteers, this would never have happened for Mya.”

Harper said her volunteers get on the Internet and start “Googling” other rescues in neighboring states for help in placing an animal such as Mya.

“I’ve been networking for 30 years,” Harper said. “It’s invaluable in helping to place these animals.”

She said a call from a town outside Houston, Texas resulted in a phone interview. “We interview everyone who wants to give an animal a home. If everything goes well with it, we visit the house and be sure the people can adequately care for it.”

In Mya’s case, the home visit was done by the sister of a SAF volunteer. “Mya will be living on a ranch where she is around horses and goats,” Harper said.

Mya will meet her new owners in Parker, Colo., before heading to Texas.

Harper said this has been in the works since April. Part of the problem with adopting an animal in another state is transportation.

“We work with Operation Roger,” Harper said. “It’s a group of long-haul drivers who volunteer to transport an animal from one place to another. We had a driver lined up for Mya when the trucker called and said he had been routed to Pennsylvania and had several runs to make before he could head for Texas.

“That meant Mya would be on the road for four weeks. She likes riding in the car but that was just too long.”

Harper said both parties decided to look for another alternative and put the adoption on hold.

“I’ve talked with Mya’s new family so often I feel like I know them. When they told me a trip was planned to Colorado, one of my volunteers stepped up and said ‘I can take her (Mya) to Colorado to meet up with them.’”

The volunteer, Lisa Franklin, has relatives living close to Parker. The pair left for a road trip Wednesday.

“I’m so proud of my volunteers,” Harper said. “They are committed to the animals’ well-being.”

SAF has come under scrutiny and been subjected to insinuations of a financial nature.

Harper said, “The Mirror ran four straight weeks of articles slamming me and Symphony, insinuating the misappropriation of funds in print.”

“I took my accountant and met with Dan Weeks (editor) June 30 to look at the books,” Harper said. “What he discovered is the funds are accounted for — plus some. Kevin (Harper) and I have contributed thousands of dollars of our own money to the foundation.”

Harper said Weeks saw “more than he was entitled to” and she is “entertaining the possibility of contacting an attorney.”