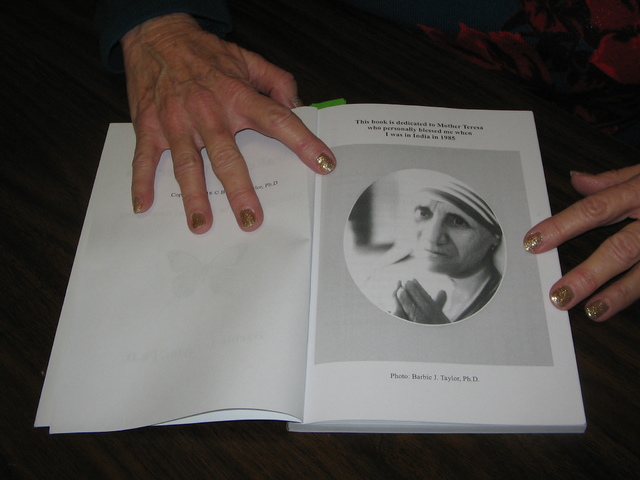 Dr. Barbie J. Taylor dedicated her first book, “I Brake For Butterflies: A Simple Guide To Spiritual Awakening,” to Saint Teresa of Calcutta, for a brief encounter and blessing from the saint in 1985. Taylor will discuss the experience during her book signing Saturday from 1 p.m. to 2:30 p.m. at the Pahrump Community Library, 701 East St. Brenda M. Klinger/Special to the Pahrump Valley Times 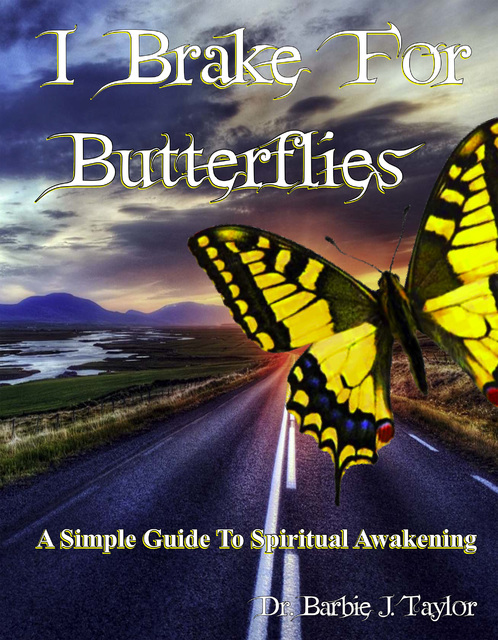 Dr. Barbie J. Taylor, a well-known and now retired Pahrump psychologist, has another addition to her long list of achievements.

“Dr. Barbie,” as she is fondly called by friends and clients, has written her first book, “I Brake For Butterflies: A Simple Guide to Spiritual Awakening”.

Taylor said the basis of the book is about choosing love over fear.

“We’re going through a time of great change on this planet, the frequency is shifting; some people talk about it as ‘ascension’, and during this time we need to raise our consciousness and become more loving, and more cooperative and more of service to others,” she said.

The book is written for beginners to many ideas presented in the book in a light, easy-to-read style since it includes topics that may be unfamiliar to many.

“There’s a lot of people who are not aware that the extraterrestrials (ETs) have been here longer than we have,” she said. “And, there is an inner government, and that there is cooperation and technology, exchange, and all kinds of things that are happening.”

“That program attunes people to what’s really happening in the world.”

Taylor realizes there may be skeptics among some readers.

“You know, read the book and think of it as fiction, if you want to, that’s okay.”

She said there is so much more information in the media openly than in the past about ancient aliens, cosmic discourse and all kinds of UFO things, and many people have had their own experiences.

Taylor shares many experiences and insights from her career spanning over 30 years.

Readers of the book can select the chapters in which they are interested.

In 1985, Taylor was invited to New Delhi, India to present a paper at an international sexology conference.

She spent six-and-a-half weeks traveling and touring around the country before the event.

Taylor was part of a group that went to Calcutta to visit Mother Teresa, now Saint Teresa of Calcutta. After being told she was not available, the group went to the chapel to meditate, and the saint unexpectedly appeared as the group was getting ready to leave.Saint Teresa blessed them; Taylor snapped a photo and has dedicated the book to her.

Taylor said she is not Catholic, but feels very connected to the recently canonized saint since that blessing.

She described the trip as a “total miracle” in the way events unfolded, including her longtime desire to see Sai Baba, the world-renowned, now deceased, spiritual leader in India at his holy residence (ashram).

The first chapter of the book describes another extraordinary experience Taylor had while in New Delhi. She met some new people, who became her tour guides. It turns out the man was the uncle of Prime Minister Rajiv Gandhi, now deceased, who became prime minster when his mother, Indira Gandhi was assassinated one year earlier.

Taylor tells the story of how she was able to attend the one-year anniversary memorial service sitting with family members and dignitaries, all unusual happenings for a first-time visitor to India.

Also, in the first chapter, Taylor explains the significance of butterflies to the book title and the creature’s symbolism for her personally, like a caterpillar evolving from the cocoon as a beautiful butterfly.

“I think of people as being like that. As we raise our consciousness, we have that potential within us to be completely changed,” Taylor explained. “And this book is a way of helping people to make some of those changes.”

Taylor plans to talk about her unexpected encounter with Saint Teresa of Calcutta at a book signing tomorrow, January 21, from 1 p.m. to 2:30 p.m. at the Pahrump Community Library, 701 East Street. Taylor is selling the book for $15 at the event. The paperback and Kindle edition are both available at Amazon.com.

Born and raised in Southern California, she started college at age 25 while raising two children as a single mother and completed her undergraduate degree in psychology at California State University, Long Beach.

Taylor forged ahead in her studies and earned a doctorate in clinical psychology from the University of Washington in Seattle when she was 35 years old.

Throughout her multi-faceted career, she was a research coordinator at the Center for Marital and Sexual Studies in Long Beach, California, and later taught Human Sexual Behavior and Contemporary Issues in Parapsychology at the college level.

Taylor has worked in private practice in California, Arizona, West Virginia, Pennsylvania and Nevada, including Pahrump.

While living on the East Coast, she was a regular on television and radio programs and later continued working in radio as one of the “Romance Doctors” in Irvine, California.

Dr. Barbie moved into Nevada in 1992, while employed as a private consultant for the Bigelow Foundation in Las Vegas, which was funding research in parapsychology.

Her assignment was to find the world’s greatest medium, and she chose George Anderson, who has written books and conducted sessions using his ability to communicate with people who have died, bringing closure to their loved ones.

Also in the 90s, Taylor conducted research and worked with Dr. Steven Greer, founder of the Center for the Study of Extraterrestrial Intelligence (CSETI). In the book, she includes some of her own experiences with UFOs and “visitors”, her preferred word for aliens, as noted in the book.