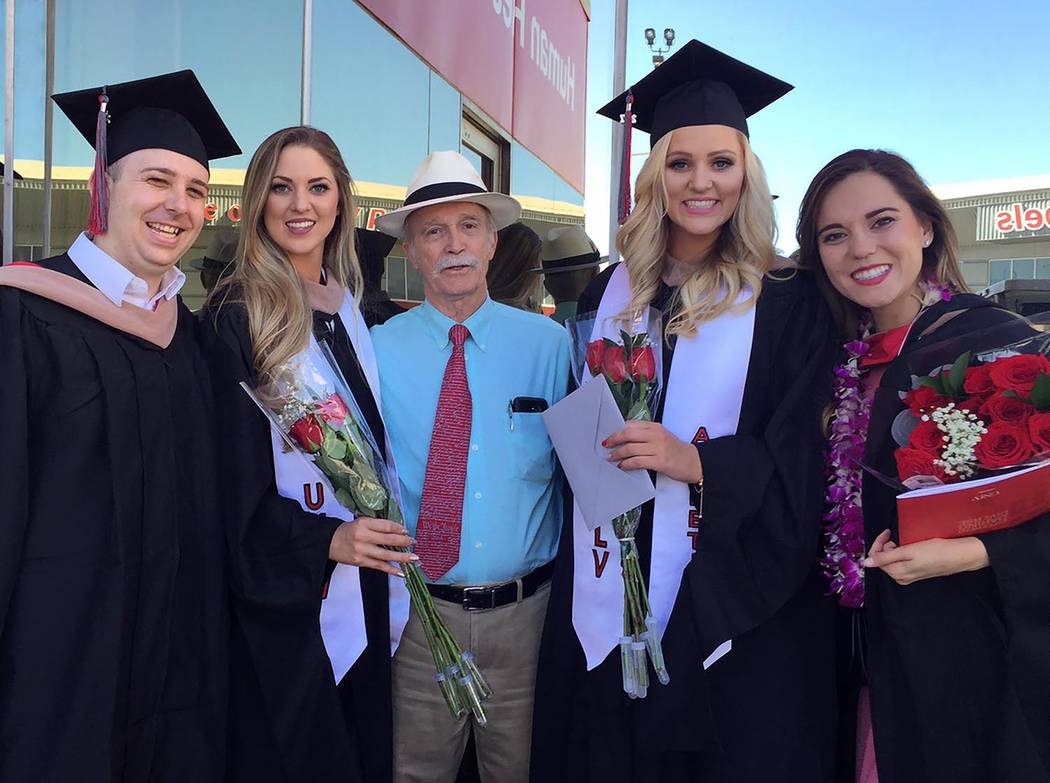 BEATTY — Beatty High School teacher Jerry Adcox got a special treat toward the end of his retirement year.

He was able to attend the University of Nevada, Las Vegas graduation of four former students who earned their MBA degrees at the same time.

Nick Gorman, son of Pat Gorman, Suzie Jackson, and stepfather Dave Jackson, graduated from Beatty High School in 2007. He finished his MBA with a dual concentration in finance and marketing. He works in the corporate offices of MGM as a member of a “niche analytic team” gathering information on high-net-worth gamers.

He says he plans to stay with MGM for now and perhaps “try to play the corporate ladder a bit,” but is also considering going to law school.

Kacilyn Schroeder, daughter of Randall and Joy Schroeder, is a 2010 Beatty High School grad. Her MBA is in marketing, and she works in the UNLV Department of Enrollment and Student Services, where she is able to use marketing skills. She originally considered going into architecture or engineering and had a strong interest in graphic design. She says that marketing is a creative outlet for her.

Autumn and Ariel Spicer are the daughters of David and Natalie Spicer. Both work in UNLV athletic administration.

Autumn (Beatty High School class of 2009), whose MBA is in marketing, handles community relations. She says UNLV is a great place to work and wants to make it a career.

Ariel (Beatty High School class of 2010), focused her MBA on new venture management, which she says is another term for entrepreneurship. She works as an administrator for the UNLV athletic office, working on such things as special events, team agreements, and more.

Adcox, “Mr. A” to his students, has been a teacher for 37 years, 25 of them at Beatty High School, has been very popular and well-liked by students and staff. He taught history and government and coached football and track during his time at Beatty High School. At one time he also taught a class in athletic training, and at least one student from that class has made a very successful career in that field.

Adcox says he and his wife, Connie, who was also a teacher at Beatty High School before passing away, fell in love with Beatty when they first moved there.

“It was like dying and going to heaven when we moved to Beatty,” he said. “We never loved a place like Beatty.” He also said that “Beatty is a community the way the word is supposed to mean.”

Adcox plans to stay in Beatty, and he will continue to be the very entertaining announcer for Beatty High School athletic games.