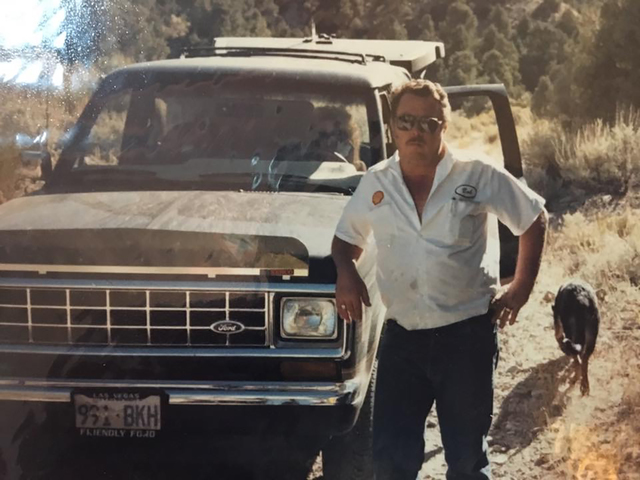 Robert “Bobby” Revert worked at the Nevada Test Site for 20 years and served 14 years on the Nye County Commission. He was instrumental in starting and funding the Nye County Town History Project while a commissioner. Courtesy of the Revert Family

Robert Norman “Bobby” Revert, a lifelong resident of Beatty and a pillar of the Beatty and Nye County community, passed away on Nov. 4, 2016 at 72. His roots in the area were deep.

Bobby’s grandfather, Albert Revert, came to the United States from France as an indentured servant at the age of 10. He was employed by a lumber company in the mountains west of Reno. A hard worker, he ended up owning the company, with lumberyards in a number of Nevada communities, including in Tonopah and Rhyolite.

Albert Revert went broke in 1929 and he and his son, Art, Bobby’s father, hit the road to see what new opportunity they could find in Nevada. By then, the great flash-in-the-pan boomtown of Rhyolite was down to a couple hundred people but property in the area was cheap. They particularly liked what they saw going on at Chloride Cliff in the nearby Funeral Mountains. Albert said, “We don’t have any money, but it’s a good place to start.” They ended up settling in Beatty. Over the years, they established several local businesses and the family has been there ever since.

A Trip to Las Vegas

Bobby was born in Reno on Jan. 30, 1944 but lived his life in Beatty. Sixty-five years ago, when Bobby was growing up, Beatty was a pretty isolated place. The only paved road in and out of town was U.S. Highway 95. People didn’t drive as much as they do now. A trip to Las Vegas was a big deal.

Bobby said the Revert family went to Las Vegas once a year just before school started. They’d load up the car, put a couple of water bags in front of the radiator, and off they went. They stopped at Lathrop Wells, got a cool drink, poured water on the radiator, and headed on down the road. Same thing at Indian Springs. In Las Vegas, they shopped on Fremont Street and took in a movie at the Palace Theater, a real treat in the days before television.

The development of the Nevada Test Site in the early 1950s led to big changes in Beatty. It was the closest town to the huge facility and families moved there because of the jobs. For a young man in Beatty, there was almost no place else to work. There was an increased number of children in school and the town was full of young GIs. And, of course, the cathouses and bars were packed. Bobby worked at the Test Site for 20 years.

In the oral history I did with Bobby Revert in 2008, he pointed out that the officials behind development of the Nevada Test Site had made, as he put it, some “terrible mistakes.” The biggest was perhaps the government’s failure to develop a major education program on nuclear energy.

Instead, they let people’s lack of understanding go unchallenged.

He went on to say, “I think Yucca Mountain is absolutely safe… . If you want to get into a conversation on Yucca Mountain with the average person, I’d say at least eight out of ten people have no idea what they’re talking about. And it’s our own government’s fault for not educating the Bob Reverts and everybody about what it is.”

The project’s purpose was to preserve county history through interviews with senior residents who discussed what life and times had been in decades past. Interviews were recorded, transcribed, beautifully bound, and deposited in all Nye County and some state libraries. In all, nearly 150 interviews were conducted. The key thing about the interviews is they are history from the perspective of those who lived it. These interviews will survive as long as there are human beings around who care about the area’s past. They amount to a kind of immortality for those who participated. This is true for Bobby Revert, who, in addition to being interviewed, played a major role in making the history preservation effort possible.

A second part of the project was to use the information contained in the oral histories, along with existing published sources from old newspapers, public records, and works of other historians, to write and publish books on the history of many Nye County communities. This has resulted in the publication of some 20 original volumes on Nye County history.

I conducted oral histories with Bobby Revert’s father, Art Revert, in 1987, and his uncle Robert A. Revert in 1988. I also had the honor of conducting a series of oral history interviews with Bobby over a period of four months in 2008, which resulted in a volume nearly 200 pages long.

An extremely rich source of information on life and times in Beatty and Nye County, it is packed with details about old-time prospecting and mining, including a hair-raising story about his escape from a burning mine shaft fire as a teenager. All three Revert oral histories are available to read online at: http://www.beattymuseum.org/oral.html.

A celebration of Bobby Revert’s life will be held in the Beatty Community Center on Saturday, Nov. 12 at 3 p.m.

Bob McCracken has a doctorate in cultural anthropology and is the author of numerous books in the Nye County Town History Project. He was a personal friend with Robert Revert.