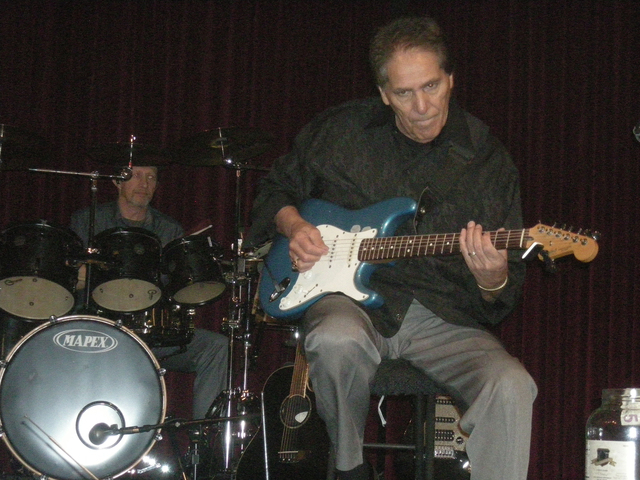 The crowd at the Pahrump Nugget Casino on a weekend night saw Sidro’s Armada go through familiar pop tunes like a Fleetwood Mac medley, Toto’s hit “Africa”, even “Shake Your Booty” by K.C. and the Sunshine Band.

Then lead guitarist Sidro Garcia sat down on his chair and played the Spanish classical hit “Malaguena” by Cuban composer Ernesto Lecuona, along with Mason Williams’ 1960s classic “Classical Gas” and the Santana tune “El Farrol.” The audience paused from playing the slot machines or their ordinary conversations to take notice and applauded warmly after he went through some lightning-fast riffs on his guitar.

Sidro’s Armada, which plays at the Pahrump Nugget Hotel and Casino lounge stage from 7 p.m. to midnight this Friday and Saturday, was inducted into the Las Vegas Rock and Roll Hall of Fame in 2011.

Garcia, the band leader, moved from New Mexico to Las Vegas in 1965 with performer Sue Thompson, when he played in a band called The Sneakers. In his heyday in the 1970s, Garcia said his band was the main showroom opening act for George Burns, Barbara Eden, Jim Nabors, Al Martino and Johnnie Mathis as Sidro’s Armada. They played Harrah’s Casino on Lake Tahoe. Other gigs were as far away as The Latin Casino in New Jersey and the Fontainebleau in Miami.

In Las Vegas, Garcia said he first played at the Aladdin, then the Frontier, the Stardust, the Sahara, the Maxim, Palace Station, the Dunes and the Sands. He had extended gigs at the Maxim and the Mint.

Garcia said he learned from performers like Louie Prima , Billy Eckstein, Fats Domino, Vic Damone and Little Richard who played in the same lounges. While he plays a Santana tune and his style can seem to resemble the rock superstar, Carlos Santana wasn’t a major influence, Garcia said, but he was inspired by blind guitarist Jose Feliciano.

Gradually, Sidro’s Armada went from a 10-piece band to an eight piece, a seven piece, a six-piece band, then a quartet, he said, calling it a sign of the economy. He is accompanied by Mary Ball on vocals, guitar and keyboard, Rick Bisbee on keyboards and vocals, Dave Collup on drums.

So is it a step down playing in Pahrump? “No, not at all. When I first worked there, all these people who had seen the act through all the years came up to me,” Garcia said. That includes local car dealer Tom Saitta. Garcia said he played at Harrah’s in Lake Tahoe with Saitta, who plays the trumpet, back in 1966.

“Most of the people there are a little older than normal, which is why I like it because I’m old too. Once we get them on the dance floor we hope the next song they dance to will keep them on the floor a little longer. We try to play what the people want to hear. I’ve always said that we’re like Walmart, we got a little bit of everything for everybody,” Garcia said.

It would seem he’d rather play a classical concert, but Garcia said he doesn’t mind playing the dance hits.

“You know what my favorite kind of music is? What everybody wants to hear,” Garcia said. “I like to hear people smile and applaud and dance. That’s my job.”

“They just did a documentary, I was on the Las Vegas top 50 jazz players. I’m not a jazz player, but they put me on that. They put my Classical Gas on there,” Garcia said.