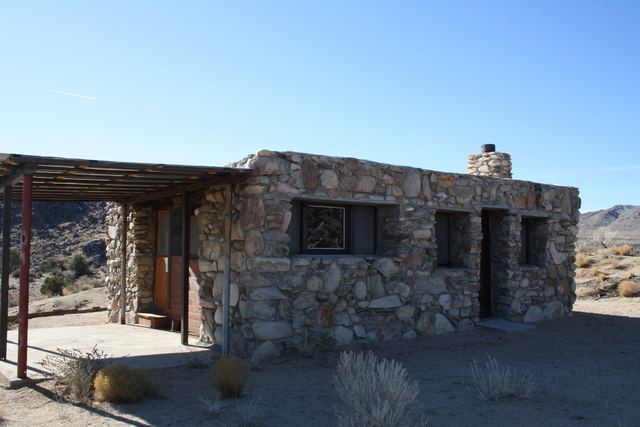 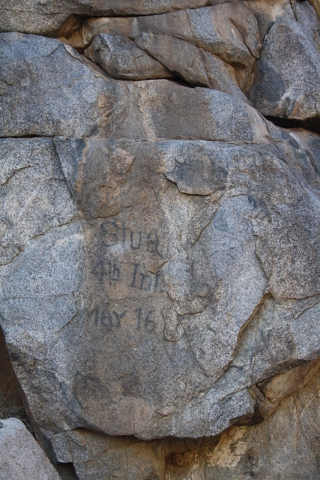 Before the weather gets any hotter in our region, a good place for a short hike might be Mojave National Preserve, located in California just south of the Nevada border.

One you might try is the Rock Spring Loop which boasts a historic stone house, the site of a 19th century Army post, a natural spring and American Indian petroglyphs.

The trail offers an easy one-mile hike with only 100 feet in elevation change. It starts at about 4,900 feet, a pleasant altitude in early summer, with temperatures likely about 10 or 15 degrees cooler than in Pahrump. Even so, I would get to the trailhead early in the morning, to enjoy the hike at its most pleasant.

From the parking area you walk through the hikers’ gate and just a few minutes later you will be at the Rock House.

The house was built in 1929 by homesteader Bert G. Smith, a World War I veteran whose lungs had been damaged by poison gas, and who came to the desert hoping to prolong his life. It worked; Smith lived in his own home 25 more years, and survived more than 30. Carl Faber, a noted artist, later lived in the house, as did a couple of other colorful folks.

The loop trail starts from the west side of the house and first goes south, then heads down the hill to the east. As you walk along you will soon see the wide sandy wash below, where the trail will continue. This area was the site of Camp Rock Spring from 1866 through early 1868. Camp Rock Spring was one of many U.S. Army posts established along the remote Mojave Road, in Arizona Territory and California, to insure the safe delivery of U.S. mail and supply wagons. Living conditions were very bad and out of the 73 men stationed here during the post’s 15-month operation, 20 deserted.

Once you arrive in the drainage, turn right and head upstream. On the north side of the wash you will find many American Indian petroglyphs on the granite walls.

On the south walls you will find an interesting inscription left by a soldier. It reads: Stua, 4th Inf. May 16. I am told this was most likely written in either 1863 or 1864 by Charles Stuart, a musician in Company “B” 4th Infantry, California Volunteers.

If you continue up the wash you will come to Rock Spring, where even in the driest times I have found at least some water. There are some large boulders strewn around the spring, perfect for sitting and taking a break in the shade of the deciduous trees growing here.

Water was life in the desert, especially in the days before speedy travel by motor vehicle, so the spring was the very reason the trail passed here, and an army post was thought necessary.

Later it gave its name to the Rock Springs Land and Cattle Company, which ruled a million acres of grazing lands by controlling water sources. The cattle empire’s cowboys fought homesteaders and rustlers, with occasional gunplay. Later the company broke up into several ranches, and cattle operations continued into about 2001.

After visiting the spring, head back down the wash and you will pick up the continuation of the loop trail. This will lead you up and onto a natural bench where it then swings back to the northwest to a ridge.

Here you can see the Providence and Hackberry Mountains. The trail then heads back up and ends between the Rock House and the parking area.