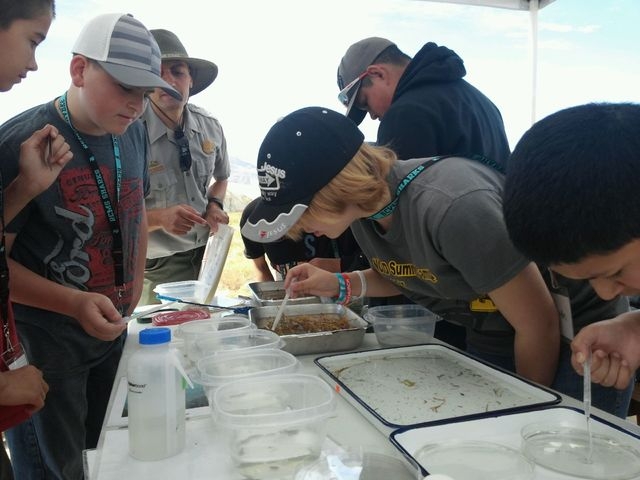 Twenty-four students from Rosemary Clarke Middle School were treated like VIPs on Saturday at Death Valley National Park during the BioBlitz Festival.

“Our school was the only school invited to the BioBlitz event in Death Valley,” seventh grade social studies teacher Rob Nielson said. “We got to interact with scientists studying the environment at Salt Creek.”

Nielson organized the event for the school and said the purpose of the visit was to expose the kids to the outside world.

“Our kids just need to get outside,” he said. “I want the kids to learn what a fabulous place we live in.”

“We go on four to five trips a year,” Nielson said. “And the majority of the trips just cost transportation. I even believe we will be refunded the cost of transportation on this trip by Death Valley.”

According to Nielson, the fact the students got to talk to the scientists was an added bonus to the trip to Death Valley.

The BioBlitz event at Salt Creek is a festival celebrating the biodiversity of the national park area and provides an opportunity for all ages to participate in valuable research.

During the BioBlitz event, the students got to interact with various scientists. One group of scientists was studying a pupfish that lives in Salt Creek. A professor from the University of Nevada, Las Vegas was tagging the fish in hopes of learning what happens to the fish when the creek dries up.

The study wanted to determine if the pupfish actually burrowed into the ground or went somewhere else.

The other study was conducted by a group of entomologists. The study was classifying beetles and possibly looking at a new species of Caddisfly.

Seventh grader Faith Patterson is a bug person and loved sorting through the different invertebrates.

“I was raised with all sorts of insects early in my life because I raise reptiles at home so I love handling bugs,” Patterson said. “Sorting through the different water invertebrates and classifying them was the best time there.”

Patterson enjoyed this part because she was able to tell the scientists what she thought and share her ideas.

“We got to give them (the scientists) new ideas about the bugs,” she said. “Ideas like why they were living there and what they ate.

She also got to share her ideas on how the Caddisfly developed a shell. She got to see various types of shells that the fly produced before emerging as an adult.

“I got to see half-grass, half-rock shells and some just rock shells,” she said.