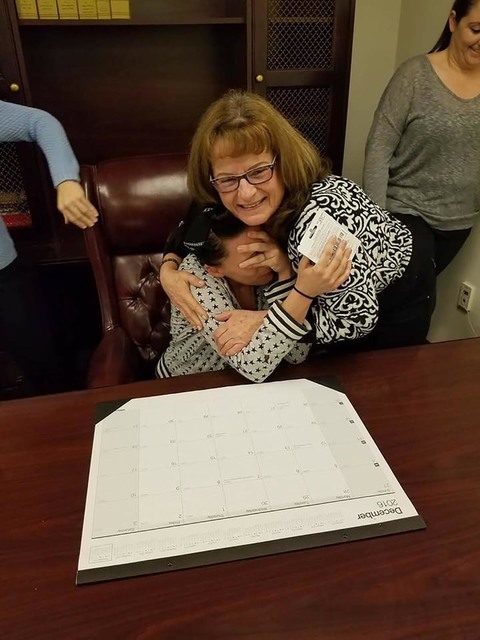 Pahrump Valley Rotary Club member Cecelia Thomas surprises a mother who just received a $25 gift card. The gesture is part of the club’s Act of Kindness program where Rotarians pay a bill or tab for an unsuspecting family or individual with gift cards. The Rotary Club distributed more than $2,500 in gift cards this month. Special to the Pahrump Valley Times

Imagine standing in Walmart’s checkout line with a cart full of groceries not knowing whether you have enough money to pay for the items you and your family need.

Then imagine a total stranger walking up and swiping a gift card to pay for your much-needed provisions.

The self-described service organization initiated a program roughly two years ago known as Acts of Kindness.

Rotary Club President Ryan Muccio said the Acts of Kindness program replaced what was once known as the Rotary Club’s Giving Day.

Muccio came up with the Acts of Kindness program back in 2014.

“I really don’t want to take full credit for it, but we just decided that we needed to do something else for the community,” he said. “With the Acts of Kindness program, we decided to purchase $2,500 worth of $50 gift cards from Smiths and Walmart as well as some Visa gift cards for Christmas.”

Muccio said the gifts cards were distributed to each of his fellow Rotarians where they would seek out individuals and families who may need a little help during the holidays.

The action allowed the Rotary Club members on their own time, to pay for groceries, pharmacy prescriptions or even utility bills.

The members could present the act of kindness in any manner or setting they prefer.

Muccio said at times, a member would just simply walk up and hand someone a gift card, which was contained in a Rotary Club Christmas card, where that person could do whatever they wanted with it.

At other times members would stand near a checkout lane at a store, where they would walk up and slide the card in the machine to pay for the grocery bill.

“There were other times where members would go to different restaurants and anonymously give the waitress the card and ask them to pick someone they thought would benefit the most from the card. It was just kind of all over the place on how we did the act of kindness. It’s hard to say how many different individuals benefited from the act of kindness but there were many of them, as well as families.”

Muccio himself engaged in several acts of kindness efforts over the holidays.

He said though the recipients’ reactions varied, all were very grateful for the altruistic gesture.

“I personally did a few acts of kindness and the reactions were that of shock and surprise,” he said. “Many of the people said that this has never happened to them before. I did have a couple of people who opted to pay the act of kindness forward. They said they necessarily didn’t need the $50 and they asked us to give it to the person behind them in line. I thought that was pretty neat.”

Over the years, the Pahrump Valley Rotary Club has performed countless service projects benefiting the community.

Each summer the organization provides “Christmas in July” where admission fees for the town pool are paid for by the Rotary.

Just before the Acts of Kindness program this year, Rotary Club members joined forces with members of the Nye County Sheriff’s Office for the annual Shop with a Cop Christmas event.

Thanksgiving’s Ticket or Turkey program was a hit among area residents, as sheriff’s deputies handed out turkeys provided by the Rotary Club instead of traffic tickets to unaware motorists around the valley.

Muccio said the Rotary Club’s service projects and kind gestures will continue into the new year.

“The Acts of Kindness program is not just for the holiday season,” he said. “We will probably do another one come April or May of next year. It just goes to show that it doesn’t have to be a holiday to make somebody’s day a little better. Right now is the time that we spend the money we raised throughout the first half of each year. Now we are putting the money back into the community.”

At present, there are roughly 38 Pahrump Valley Rotary Club members.

Muccio said there’s a process the organization undertakes to accept new members into the fold.

“In order to become a member of the Pahrump Valley Rotary Club, you have to be sponsored by a current Rotarian,” he said. “That person will invite you to a few meetings to get a feel of what we do and how we do it.”

For additional information on the Pahrump Valley Rotary Club, log on to www.pvrotaryclub.org/