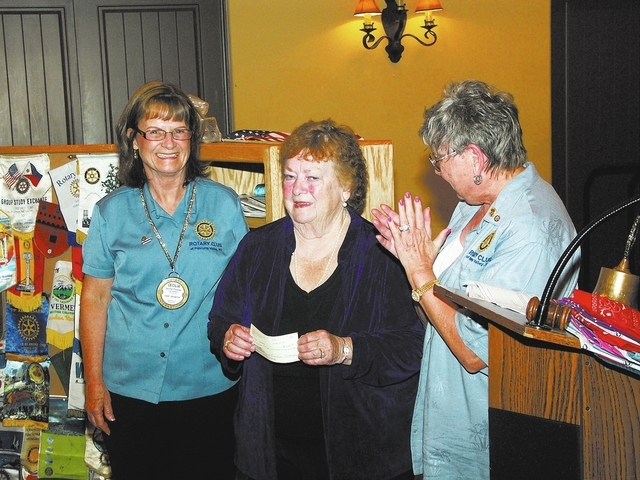 Like a slugger striking out in the bottom of the ninth inning in front of the home crowd, anticipation turned to disappointment moments after the winner of the Pahrump Rotary Club’s $10,000 cash giveaway was announced on Saturday.

The event held at Lakeside Casino drew several hundred locals to the amphitheater for a night of fun, food and prizes.

Rotary member and event organizer Dina Williamson-Erdag said a great time was had by all for the Rotary’s biggest party of the year especially for local resident Janet Harvey whose ticket was drawn for the grand prize.

Unfortunately, Harvey had left the event early and was not present when her ticket was pulled Erdag said.

“I was able to contact her the next day. She was there earlier in the evening and had dinner then she left because she had somewhere to go. She was planning to come back in but decided not to when she saw people leaving. I told Janet that when her name was called there were many groans. She was very excited and she had recently gotten married within the last year. She was absolutely delighted with the windfall,” she said.

The lucky winner was present however, for Wednesday’s Rotary Club meeting at Mountain Falls where the official check presentation took place.

She said it was not her first time participating in the Rotary’s $10,000 event.

“I have purchased tickets several times over the years. I just bought this ticket on Thursday and my daughter bought one too so we had two chances in the family. I feel fortunate because I just got married August 31 and we haven’t had our honeymoon. Now we can,” she said.

Harvey also recalled what happened when she arrived home on Saturday evening.

“I got home around 9:30 and I checked for messages and there was one call that came at 9:09. When I heard it I darn near fainted. It was very special because we are going to Monterey, California on our honeymoon,” she said.

Erdag noted that the number of tickets sold this year was slightly down from previous years mainly due to the economy and tighter personal budgets.

“We print 300 tickets and normally that is our goal. We learned about two weeks ago that we were not going to hit the 300 mark so we kind of regrouped and targeted for 200. We were just under 200 and we were able to push a few more tickets during the evening. We were a little disappointed because normally we sell just about all of the tickets,” she said.

Erdag also said luck was on the side of Harvey who purchased just one ticket compared to individuals who made multiple purchases at $125 apiece.

“She has attended the event in the past and she recently saw the advertisement for tickets at one of the locations in town. She and her daughter bought one each and that’s all it took,” she gleefully said.

He said the outdoor location this year was a nice venue change for all who attended.

“It was a little bit chilly but this is a great venue and it’s been such a gorgeous day. I think it’s nice having it outside. It’s such a great cause so it was easy for me to be enthusiastic. I just can’t say enough about what Rotary and other service organizations do in this valley,” he said.

Kunzi, who also purchased a ticket learned early in the evening that he would not have a chance to win the grand prize because his ticket was drawn during the raffle portion of the event.

“I was one of the ones who won a raffle prize so I had no chance for the $10,000. I did win a gift certificate for El Jefe restaurant,” he said with a laugh.

Erdag, meanwhile, wanted to stress how local Rotarians work to help many of the less fortunate in the community.

She also said the organization’s efforts are evident in area schools.

“Rotary does a number of ongoing service projects each year. One of them is the thesaurus program where they purchase a thesaurus for every eighth grader in the Nye County School District. They also offer mini grants for teachers who apply for them. The grants are reviewed and they are awarded in the beginning of September. They also get involved in some national projects as well,” she said.

Erdag mentioned another high profile Rotarian event coming up for the holiday season.

“Our biggest project on the horizon is ‘Giving Day.’ We do that in December where we put out the angel tree to benefit families with children for Christmas because the families may not have the money to make a really nice Christmas for their children. We help out by providing every child with a shirt, a pair of pants and shoes. They also get three gifts of their choosing within a certain limit of course. We want to make sure that every child that we are servicing gets gifts,” she said.

The organizer also said that even though conditions were a bit chilly in the evening, it did not dampen the spirits of those who attended Saturday’s event.

“We draw a lot of seniors but the cold affects them a little bit differently and they have concerns about getting sick and I can certainly understand that. The weather was lovely during the day but it was October weather. I was pleased to hear from those who had a wonderful time and was happy with the event,” she said.