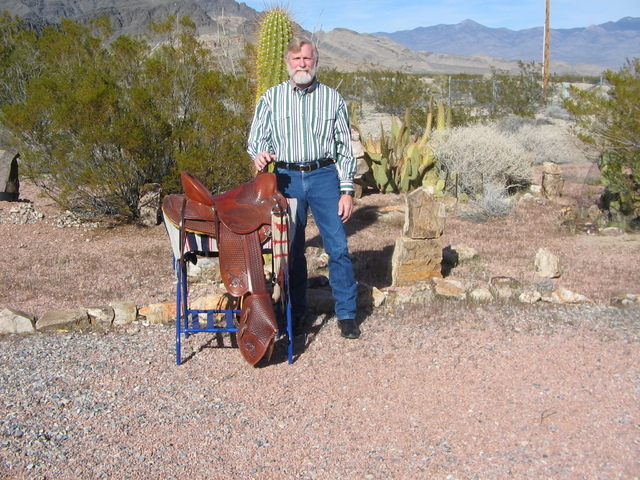 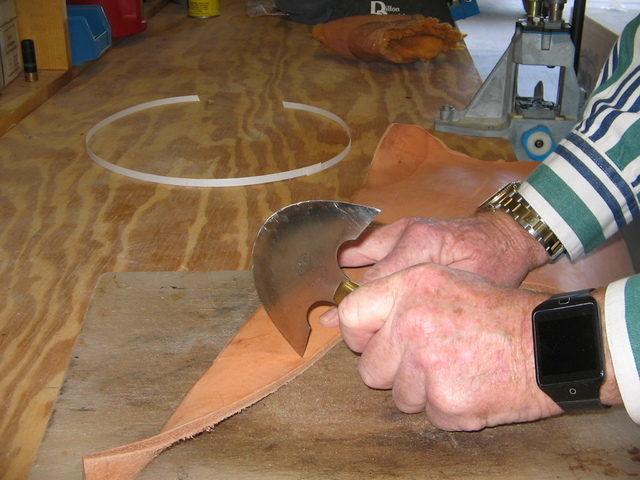 Jay Davis has spent hours sitting in saddles as an avid lover and rider of horses, but he has also logged many hours in custom-making saddles.

While living in Virginia in 2001, Davis decided to take the reins and learned the trade of making saddles. He traveled to Loveland, Colorado for an intense, one-on-one, two-week course taught by well-known saddlemaker Dusty Johnson at his Pleasant Valley Saddle School.

It took over 40 hours to make that first saddle, everything was done by hand: drawing the patterns, cutting and shaping the leather and hand-stitching all the parts.

Davis then opened up his own business, Cedar Run Saddlery, in Bristow, Virginia, which he operated prior to moving to Pahrump several years ago.

It’s not one size fits all, when it comes to making saddles. Precise measurements are taken for the rider’s thighs, waist, buttocks, similar to those in custom-making a dress or a suit.

Different saddles are made for a specific breed of horse and its intended use. For example, a hand-crafted saddle for an Arabian horse, which has a shorter back, would be different than one for a quarter horse, a warm blood or a thoroughbred, which have longer backs.

“If it’s too short, it cuts in the kidneys, it hurts the horse,” Davis said. “But, if you use a regular saddle tree on an Arab, you’re up on its rump and hurting it because it’s too long.”

The basic structure of a saddle begins with a frame, or saddle tree usually composed of wood. The leather is then cut and fitted over the top and underneath the tree and bars which lay up against the horse’s back, almost like a backpack. This frame is balanced on the horse for a proper fit so it’s not uncomfortable.

There are also different kinds of “trees” for saddles based on the horse’s role, to carry people or packs. A pack tree would be used on a saddle for a packhorse.

Saddle leather comes in various weights and degrees of thickness. Davis said it depends on what kind of riding a person plans and their upper body strength. A saddle can weigh anywhere from 40-45 pounds.

“Can you lift a 40-pound saddle, if not, are you going to get somebody to tack up your horse for you, or at least put it on your horse’s back,” Davis said.

The leather is rolled and delivered in one large piece, 6-feet long or more. Davis then places wooden patterns for the saddle parts on the leather, outlines them, and cuts them with a round knife. It’s a tedious process cutting through the leather in layers.

Then he starts the process of shaping and placing the pieces to the saddle tree. The leather has to be wet to make the parts pliable. There can be about 100 separate parts and it can take close to 40 hours to make a normal work saddle, or longer if it is hand-stamped with intricate designs, or dyed a different color.

Davis sews most of the parts with a special leather sewing machine, but some have to be hand-stitched, including the saddle horn which is the handgrip on the front of the saddle and the cantle, or the backrest of the seat.

He has crafted about 30 saddles during his career and can sometimes repair them, but depending on the problem, the time and materials involved, it may be more cost-effective to purchase a new one.

“It’s a time process; it’s a job that you can’t rush,” Davis said. “You cannot rush building a saddle because if you do, you’ll mess up the leather and then you have to start all over and that costs money out of your pocket.”

Basic factory-made saddles can cost several hundred dollars compared to custom-made ones, which can be quite pricey since they are made specifically for the rider and his or her own wishes.

Davis said, “You have to look at saddles, in the respect of, how much time are you going to spend on it?”

He compared it to the type of car one would want to travel in going cross-country.

“If you’re going to spend a lot of time in the saddle, riding, then you want a saddle that you’re comfortable in and that once you get out of the saddle, you don’t feel beat up,” Davis explained. “A custom saddle is built for an individual. There are no two saddles that are exactly alike, none.”

Davis explained that horses change body masses and configurations several times a year affecting the way a saddle fits. That’s why sometimes blankets are used. In humans, the body structure usually stays about the same unless there are big changes in gaining or losing weight. But for the most part, their hips and legs pretty much stay the same.

Aside from his passion for horses and saddles, Davis is also an ordained minister for the Church of the Nazarene.

“Saddlery is a way to help spread the gospel,” Davis said. “You can talk about saddles and how that equates to understanding salvation and having a relationship with God. The body of Christ is made up of a variety of different people, different parts, like a body. A saddle is made up of well over 100 parts. It comes in together as one piece that can be utilized.”

Davis’ mentor, Dusty Johnson, taught saddlemaking for over 25 years to students from all over the United States and the world. He is currently retired in Prescott, Arizona and is no longer accepting students or taking orders for saddles.

His focus is on restoring solid silver saddles like those used in the Rose Bowl Parade.

“I have a business card that says saving historic parade saddles for posterity,” Johnson said. “And that really defines what I’m doing.”

Johnson, also a silversmith, explained that no one has built these silver parade saddles since about 1974, originating in the early ‘30s.

“Then, my main objective in that is to sell them to people who will put them in their local museums,” he said. “They’re very expensive, but they are also an American icon.”

He said these saddles are from the golden era of the West as seen in the movies and they are disappearing due to the time and expense of restoring them.

Johnson has written two books, “Saddle Savvy – A Guide to the Western Saddle” and “Saddlemaking Techniques,” and produced several instructional DVDs which can be purchased through his website pvsaddleshop.com. Contact Jay Davis by email at redgus454@gmail.com.