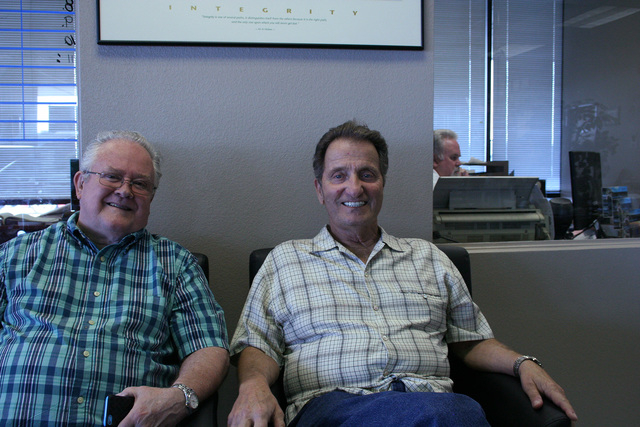 Ticket holders may bring their own food and snacks. The winery offers free wine tasting before the show. Glasses or bottles of wine will be available for purchase as well as other beverages.

The show will take place on the patio with cabaret style seating. If you plan to go with a group, table reservations are necessary.

Saitta sings and plays trumpet. Deering produces full orchestra sounds on his keyboards. Together they will take the audience down memory lane with songs such as “Fly Me To The Moon,” “I’ve Got You Under My Skin,” “I Won’t Dance” and “San Francisco.”

Brandt brings swing to the mix with songs like “Puttin’ On The Ritz,” ballads such as “The Look Of Love” and more classics including “Mack The Knife.”

Saitta said, “At the age of 5 I found my older brother’s trumpet stored away. I saw it as a wonderful toy. I got permission from my brother, who had moved on to other things, to play with it.

He stated, “I never learned to read music but by listening to it and experimenting I learned to play. When I entered high school, I tried out for the band. The director put a sheet of music in front of me. When I told him I couldn’t read music he turned me down. I went out and bought a book on how to read music for trumpet. Several months later I asked to try out again. I was then accepted as first chair.”

He continued, “I played in bands for a few years but the need to make more money led me into automobile sales and I abandoned my trumpet.”

Saitta went on to say, “Many years later I ran into an old friend and fellow musician, Tommy Deering, who encouraged me to start playing again. We’ve been playing together ever since. For a time I played in Tommy’s band. We played at Tommasino’s while it was open, Stockman’s inside the Pahrump Nugget, Draft Picks Sports Bar and several charity events.”

Deering shared with the PVT, “I learned to play the piano while still in my mother’s womb. She played all during her pregnancy. As soon as I was able to walk I started pounding out notes. With help from my mother, I learned how to play music. I moved to keyboards because I could do so much more musically. I’ve had my own bands during my career. I played opposite Harry James for a while as well.”

Brandt comes out of Las Vegas and has been a vocalist for 15 years. She and her husband play as a duo called Beauty and the Bass. She is lead vocalist with the Las Vegas Jazz Trio. Among her credits are playing The Wynn, Bellagio, Mandalay Bay, Four Seasons and Orleans.