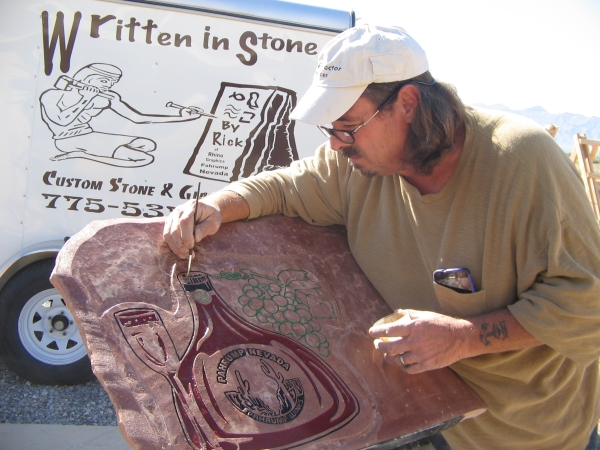 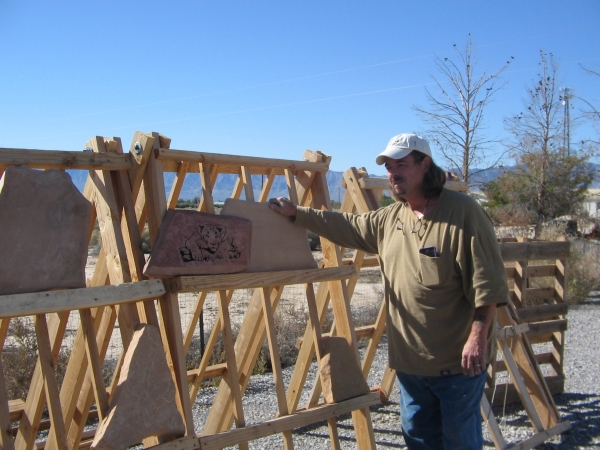 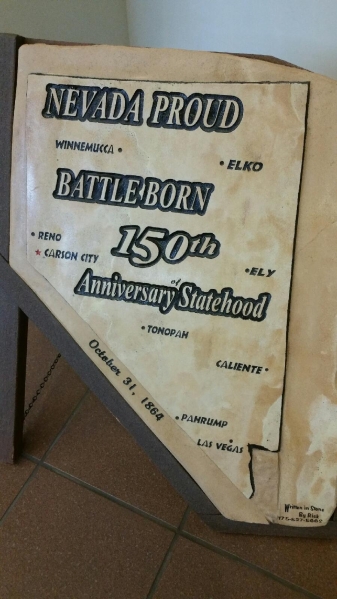 It is sometimes said that nothing is permanent until it is written or carved in stone.

That’s exactly what Rick Clout does; he etches, writes and carves in stone. He owns Written in Stone By Rick of Rhino Graphics and discovered his craft by accident.

About two years ago Clout was tinkering around in his garage cleaning some tools with a sandblaster and tried to “blast” his name in an old, rusted saw. It worked and he successfully moved on to sandblasting on glass and then stone.

“I thought it looked pretty nice in stone so I kept on trying to perfect it,” Clout said. “And I think now I’ve got it down to a fine art.”

He uses a fine micron sandblasting pin or a nozzle fueled by powdered ceramic carbide to make his designs. Ceramic carbide is type of grit material that lasts a long time and doesn’t break down easily like sand, he explained.

After buying the stones from local retailers, Clout uses a diamond wheel to smooth the surface, sands them, draws the designs on a computer, which are transferred to the stones and then the sandblasting starts. The designs are brushed in by hand with oil-based paints before the stones are sealed with a clear lacquer.

Clout likes to be called an etcher or a craftsman; he admits to not being an artist. He credits his experience in the Navy as a machinist’s mate in helping to hone his craft.

“You learn in the navy to improvise, to make things work,” he said. “If you can’t think out of the box, then you can’t fix things.”

According to Clout, everything in his shop setup is a combination of information he learned from the Internet about how to carve and chisel, sandblast stone, and marble.

He said he is a self-taught craftsman.

“Yes, nobody showed me how to do this except for what I’ve learned through reading about it and being on the Internet reading on it, or the books that I’ve bought for it.”

His first several pieces were etched on glass which he will still do, but added that people tend to want the stones more.

Clout’s wife, Charon, helps him with the sanding of the stones and referred to her as his art critic in helping with the designs.

In his short time working on stones, he has designed everything from coasters to address markers, memorial stones and placards of all shapes and sizes for local organizations in Pahrump, throughout Nye County and even statewide.

The biggest stone he’s worked on so far was in collaboration with the local chapter of the Disabled American Veterans for Pahrump Valley High School’s Army JROTC program. That stone probably weighs around 2,000 pounds and can be seen on the grounds outside the high school.

Clout has also carved stones for the Symphony Animal Foundation, the memorial walk at Pahrump’s Chief Tecopa Cemetery and for the emergency responders of Beatty Station 31.

He has also donated his works in stone to local groups including the Rotary Club of Pahrump Valley and the Court Appointed Special Advocates (CASA) program, among others.

A major example of Clout’s work is on display at the Grant Sawyer State Office Building in Las Vegas.

Last year, he crafted the commemorative stone in the shape of the state for Nevada’s 150th anniversary. Clout said he received a very nice handwritten letter from Gov. Brian Sandoval thanking and complimenting him on his work.

Another of Clout’s remarkable stones will be unveiled on Saturday by the Nevada State Society Daughters of the American Revolution Southern Chapters. He was commissioned to design a marker in tribute to Helen J. Stewart marking the 125th anniversary of the DAR.

Despite his popularity for all his great craftsmanship, Clout remains humble.

“I’m just a small little business trying to make a name for myself and do something I enjoy doing,” he said. “Because I really enjoy doing the art part of this – the craft, I should say, part of this.”

For more information on Written in Stone By Rick of Rhino Graphics call 775-537-5662 or email recdude@gmail.com.