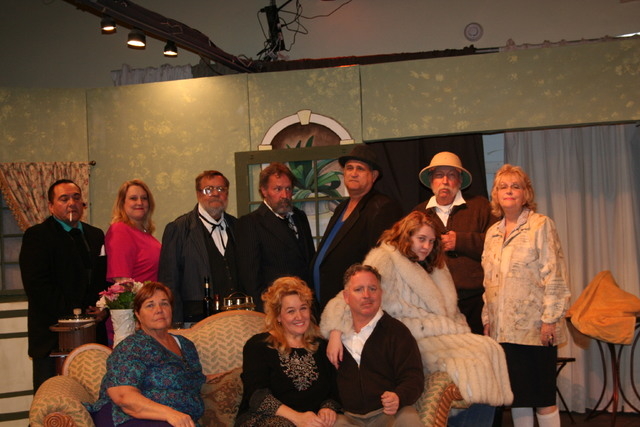 The Shadow Mountain Community Players (SMCP) opens its season with the dinner play “The Hollow” by Agatha Christie. The play is being held at the New Hope Fellowship on Friday and Saturday, Feb. 6, 7, 13, 14, 20 and 21. The dinner is Mexican style. Doors open with the dinner served at 6 p.m. The play begins at 7 p.m. Tickets are $17.50 per person.

This is a typical classic English house murder mystery. Sir Henry and Lady Angkatell have invited relatives and guests for a stay at their home for the weekend.

The guests include Dr. John Cristow (Buck Steele) and wife Gerda (Susan Zink). Dr. Cristow is a medical professional who is unaware of how his callous behavior effects people. It’s no mystery who the murder victim will be. His fate is sealed by the end of the first act. Gerda worships John and has always been unaware of his philandering ways.

The play turns out to be a lot of fun due to the performance of Kathleen Rowland in the role of Lady Lucy Angkatell. She is absent-minded and quite eccentric.

Her disjointed conversations and memory lapses add comic relief to a play filled with many suspects and red herrings. She may walk into a room carrying a lobster, with no idea where or why she picked it up. She may also contemplate killing someone for “the good of the family.”

Henrietta Angkatell (Beth Bromley) is a family member and sculptress. She was invited to stay on at the Angkatells when her studio burned down.

Edward Angkatell (Alex Delgado) has an interest in his cousin Henrietta but is shy and lacks charisma. He feels out-classed by John, who is having an affair with Henrietta.

Midge Harvey (Alessandra Delgado) is half Angkatell. Sir Henry and her Ladyship have offered an allowance but she is determined to make her own way.

Gudgeon (Frank King) is the butler. A longtime retainer, he makes sure Lady Angkatell is protected. He often covers for her lapses.

Doris (Irene Laverty) is a maid in training.

In the second act Inspector Colquhoun (D. Wagner) arrives to investigate. He’s a well-spoken gentleman. He discovers there are many suspects, none of which have an alibi. He is assisted by Sgt. Penny (Jay Webb) who is a bit rough around the edges but is very helpful in speaking to the staff.

SMCP catered the last show of their previous season. There were a lot of favorable compliments from the audience. They will cater this one also.