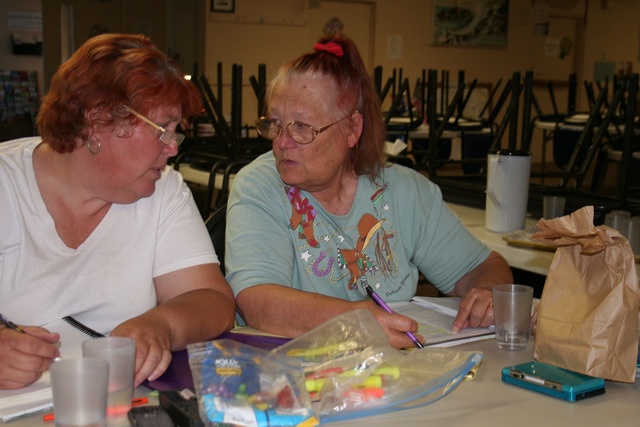 The Shadow Mountain Community Players will present “The Importance Of Being Earnest,” a play by Oscar Wilde, at Sanders Family Winery on Friday and Saturday, June 13 and 14.

Gates open at 6 p.m. and the play starts on the patio at dusk. Tickets are $15 per person. The winery offers free wine tasting as well as glasses and bottles of wine for purchase. Ticket holders are welcome to bring snacks or picnic baskets.

Wilde wrote his play in 1895 toward the end of the Victorian Era. The play is a comedy, and the main characters use pseudonyms in order to escape burdensome obligations. The high farce and witty dialogue, when the alter­egos are exposed, make up the major focus of the plot.

The cast has been rehearsing for several months and includes John/Jack/Earnest Worthing, played by D. Wagner, whose character was abandoned as a baby and adopted by an old man. He subsequently made Jack his daughters’ guardian.

He appears to be a responsible and respectable young man but leads a double life. On his country estate he is know as Jack. In London, he is Earnest.

Algernon Moncrief, played by Kenn Murphy, is an idle, decorative bachelor. He is friend to Jack, who he has known for years as Earnest. Algernon has invented a fictional friend, “Bunbury,” whose frequent sudden relapses allow him to wriggle out of unpleasant or dull social obligations.

Cecily Cardew, played by Alyssia Stats, is Jack’s ward. She lives at the country estate and is privately tutored by Miss Prism.

Cecily is obsessed by the name Earnest but even more intrigued by the idea of wickedness.

Hon. Gwendolen Fairfax, played by Alicia Cox, is Algernon’s cousin and Lady Bracknell’s daughter. Gwendolyn is in love with Jack, whom she knows as Earnest. She is a model and arbiter of high fashion and society. She is sophisticated, intellectual, cosmopolitan and utterly pretentious.

Lady Bracknell, played by Debbie Garland, is Algernon’s snobbish, mercenary and domineering aunt. She is cunning, narrow­-minded and authoritarian. She married well and her primary goal in life is to see that her daughter does the same.

Lane, played by Frank King, is Algernon’s manservant. When the play opens he is the only person who knows about Algernon’s practice of “Bunburying.”

Merriman, played by Creag Rowland, is the butler at the Manor House on Jack’s country estate.

The Director is Gayle McCaslin. Assistant Director is Laurie McCaslin. Tickets are available at Pahrump Community Library or call the winery for reservations at 775-727-­1776. Sanders Family Winery is located at 3780 E. Kellogg.