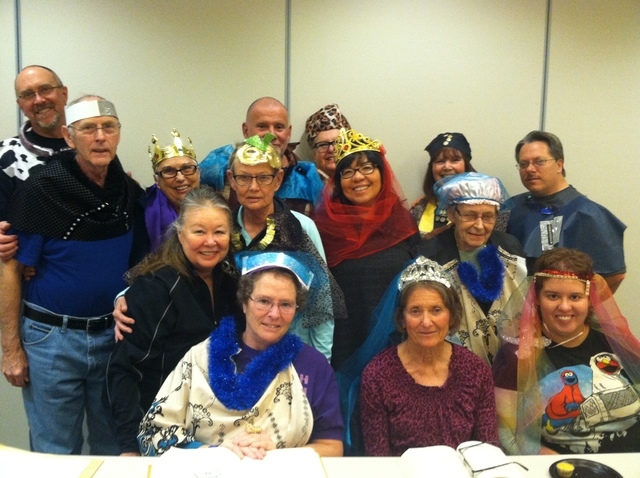 Tragedy, civil strife and prophetic witches will descend on Pahrump tonight at 7 p.m. as members of the 2015 Utah Shakespeare Tour give a live performance of William Shakespeare’s shortest tragedy, Macbeth.

The desert is a fitting setting for the twisted tale of murder, mayhem and madness, as the opening scene often depicts three witches gathered in “a desert place” who pronounce that they will meet again when “The battle’s lost and won.” And so begins the 17th century psychological thriller which includes kingly ambitions, laden with hallucinations, guilt and dueling swords.

The play, set in Scotland, dramatizes the tragedy of character and moral order with the use of witches to symbolically represent dark conflict.

Pahrump Shakespeare Round Table member Valma VonHolt has sponsored the rendition to introduce the Pahrump community to a professional and authentic Shakespearean experience. The performance will take place tonight, Jan. 30 at the Pahrump Valley High School on Calvada Blvd. at 7 p.m. Tickets can be purchased at the door at a cost of $6 for adults and $3 for students.

Prior to the performance, the actors will give a free community workshop at the Pahrump Community Library on East Street, from 4 – 5 p.m.

The workshop will give a behind-the-scenes look at set up and execution of action scenes and supernatural stage setting.

The Shakespeare Round Table, formed in 2008, is currently studying the Elizabethan play “The Merchant of Venice.” The story portrays lead character, Portia, disguised as a man, as she challenges readers to define the quality of mercy interpreted through a contrast between different religions and the perception of authority.

The Round Table seeks new members to join them on Tuesdays at the Pahrump Community Library from 2 – 4 p.m. There is no fee. Participants are likely to find themselves attired in Shakespearean garb and eating foods that would have been common during the era of a selected work.

The study of each Shakespearean work lasts approximately eight weeks. A new play, likely the comedy Taming of the Shrew, will begin in April.

For more information about the Pahrump Shakespeare Round Table contact the Library at 775-727-5930 or email tumbleweedtales@yahoo.com or ezshakespeare@yahoo.com.