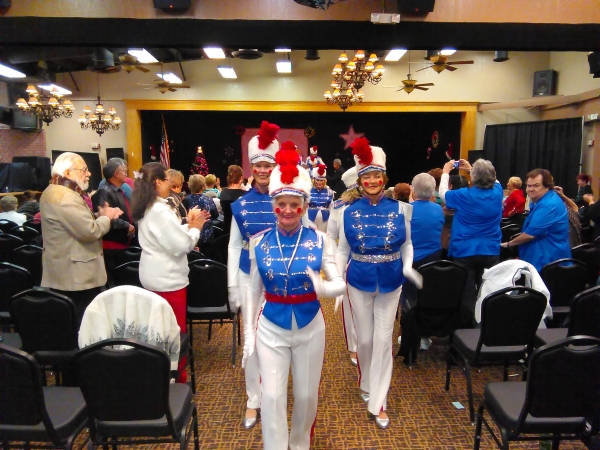 Though more than 250 people attended the Nevada Silver Tappers annual Christmas performance on Saturday, founder B.J. Hetrick-Irwin was worried about whether she could raise enough funds for three local organizations providing services within the community.

It turns out she did and as a result, Nathan Adelson Hospice, No To Abuse and the Pahrump Senior Center’s Meals on Wheels program will each receive $1,000 in support.

There was no shortage of entertainment as more than a dozen performers sang, danced and recited Christmas-themed songs and stories during two performances.

Hetrick-Irwin said she was both proud and relieved the show was well received.

“I thought the ladies did a wonderful job on Saturday even though the crowd was kind of sparse,” she said. “I was very, very worried about it because we were lucky if we had 255 people in attendance. They dug in their hearts and really gave big and thank God they did.”

Part of Hetrick-Irwin’s concern was the fact that several other holiday-themed programs coincided with the 25th annual benefit show.

She said she will make sure to better organize the event with other local organizations and agencies putting on their respective shows in the future.

“To avoid having our local events clash with one another, the business people in the community need to get together on the first of the year and get the calendar straight so we won’t be bucking heads. There were several big events going on at the same time, and it seems like each year, everything happens during the first week of December.”

Additionally, Hetrick-Irwin noted that the apparent glut of holiday activities makes it difficult for each organization to draw a good-sized audience.

“The Festival of Lights was the day before, so people it seems, are getting burnt out here in town with all the different events,” she said. “At Mountain Falls, they had over 200 people for a big hospice event which is wonderful, but it was the same night as my event was and I think that kind of hurt us.”

She also said changes are in store for her Christmas show next year, due to several factors.

“I have to change my date because years ago we only had one show and I’m probably going to go that route next year,” she said. “I think I will have it in the evening because it seems like it’s a much livelier crowd during the evening show. The girls are getting up in age and it’s very hard for them to do two shows back to back like that. I think I need to take it down to one show and I will give the money to one recipient and not three.”

Hetrick-Irwin said she pays close attention to each local organization to determine which has the greatest need in terms of funding.

“I have watched what Nathan Adelson Hospice does for the community,” she said. “They helped one of my Tapper’s husband who was in hospice and of course they took good care of my husband too when he was in hospice. Anne Harris works her behind off at the Pahrump Senior Center with their Meals on Wheels program and I think it’s just terrible that we even have to have a No To Abuse agency, but we do, and it’s very sad.”

When one of her performers fell ill on Saturday, Hetrick-Irwin praised the efforts of another local performing troupe who stepped in to fill the void.

“The people I brought in other than the Tappers for Saturday’s show were wonderful, like the Nye County Starlets, who saved me because one of my singers from the first program became ill and could not return. Tom Saitta and Tommy Deering are always there for me as well as Johnny V. The entertainment was great and lively.”

The next big event for the Nevada Silver Tappers is a golf tournament scheduled for March.

“I haven’t decided yet who will be the beneficiary for that one,” she said. “Some of it will go to my pageant, which costs me an arm and a leg to put that on each year.”