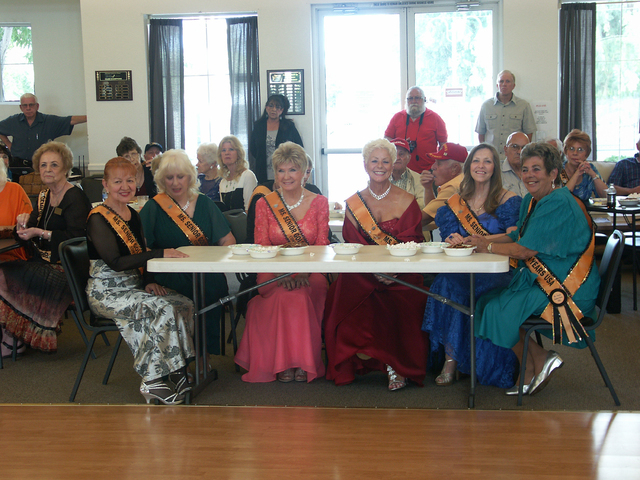 They are called the “Fabulous Six” this year, and all will vie for the title of Ms. Senior Golden Years next month as the paegeant returns to the Saddle West Hotel Casino.

The event celebrates women who have reached 60 years of age, the age of elegance.

“This is our 12th year and it’s gone by so fast,” said pageant organizer B.J. Hetrick-Irwin. “They all have their different platforms that they will be talking about at the pageant. They are really into this and they are already working it.”

Contestant number one is Julie Morris, who has lived in Pahrump for the past 13 years.

Her platform is animal rescue, where she makes dog leashes and animal accessories for newly adopted animals.

Morris will perform a tap dancing routine set to the song “A Bushel and a Peck.”

“I joined the Nevada Silver Tappers in August and I fell in love with all the girls that I am tapping with,” she said. “This is a new adventure and life and I’ve never done anything like this before.”

Dupont’s platform is all about volunteering.

She said she wants to encourage as many people who have spare time to volunteer and use their skills.

“As for my talent, I wrote a short story and I have a friend who has been trying to get me to do this for a couple of years,” she said. “This year I have been introduced to so many new friends and I’ve had so much fun that I wish I had done this a couple of years ago. I am enjoying myself immensely.”

Perez is celebrating her second year as a Pahrump resident.

“We came here from Arizona because of family and we love it out here,” she said. “My platform is the Special Olympics and it has filled my heart more than I feel that I have given to them. They appreciate everything and I have coached the track and field team and in August, I’m going to be coaching the golf team.”

Perez will perform the song “Young at Heart” by Frank Sinatra and Doris Day.

Laurayne Murray moved to Pahrump in 2001 and has been active in the community by volunteering with several different organizations benefitting seniors, children and everything in between.

“I was in the very first training class for CASA here in Pahrump,” she said. “It’s a wonderful organization, and I’m encouraging everybody to volunteer because there’s a lot of kids in need.”

Murray plans to perform a lip sync rendition of Cher’s multimillion selling song “If I Could Turn Back Time.”

Murray also had much praise for the pageant.

“I think this organization brings so much joy and entertainment to our community,” she said. “It’s a lot of fun for all of the ladies in our golden years and it’s great camaraderie.”

Her platform is outreach and “Just Say No.”

“They are very important causes for me,” she said. “This subject is very dear to my heart. “My talent is a Billy line dance and it is age-appropriate and I have been line dancing for over 20 years. At 74, I am also the oldest contestant here, which I am very proud of.”

Purcio will perform the Billy line dance to the sounds of “My Lady.”

Lorena Myers is a 30-year resident of Pahrump.

As the sixth contestant, Myers’ platform is to bring comfort and warmth to the community’s homeless population.

“I love doing this because the friendship is just priceless and I don’t care if I win or lose,” she said.

The Ms. Senior Golden Years pageant is scheduled for Saturday, June 6th at the Saddle West Showroom at 7 p.m.

Tickets can be purchased at Secret Sisters on 1161 S. Loop Road Suite A-4 or from any of the six contestants.