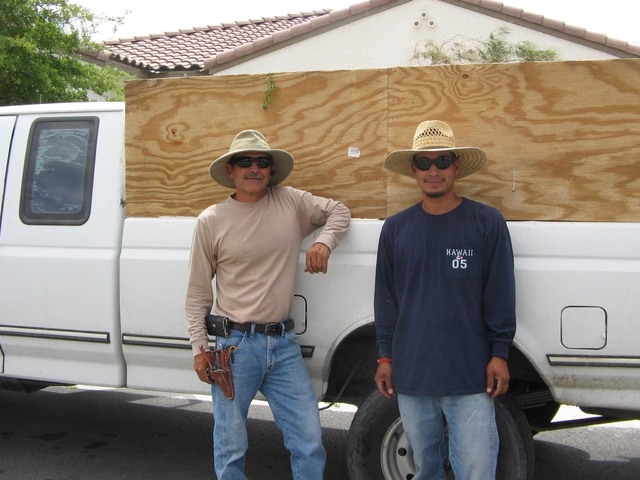 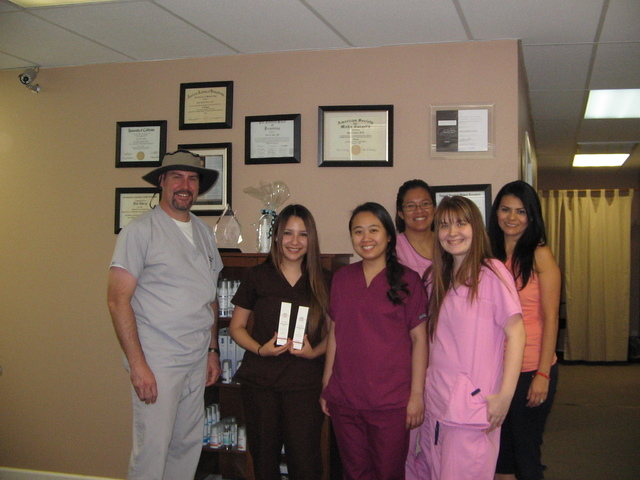 “Tis the season” for applying sunscreen products and getting decked out in wide-brimmed hats and other sun protective clothing, according to Mike Roos, PA-C.

Roos is a nationally certified physician’s assistant specializing in dermatology at Pahrump Dermatology and Skin Cancer, 2200 E. Calvada Blvd. Suite C. The office is part of the L.A. Laser and Skin Center family of offices in California and Nevada.

Roos said there is more public education and awareness underway about signs of melanoma and other forms of skin cancer than years ago. Back then, sun seekers used tanning lotions without realizing the risks of skin cancer and chronic damage.

“In general, it isn’t one sunburn or one event that happens, but it’s usually a series of chronic small exposures and occasional sunburns and whatnot that lead to damage to the normal skin cells,” he said. “Basically, so when you’re looking at someone’s overall exposure, you’re gonna look at the amount of sunburns and things like that. We don’t really quantify those because people really don’t always remember how many sunburns they’ve had in their life. But, really honestly, people do know they’ve had chronic sun exposure.”

Roos added that you tend to see more skin cancer and chronic skin damage in light- skinned individuals who don’t have as much natural melanin production to help in prevention.

When people get a tan, they think that is okay, but it is their body stimulating extra melanin pigment protection to block their cells from the radiation of the sun. It’s a natural form of sunblock according to Roos. But, this varies depending on a person’s skin type which he described in five categories.

Roos added that the skin types range from fair-skinned Caucasian, European-Americans compared to African-Americans, darker Hispanics and Asians. Skin cancer is seen in all these groups depending on genetics and the relative amount of sun exposure people have had.

“It doesn’t really matter what the statistics say because when you get a skin cancer, you know, regardless of how rare that may seem to you, it’s not rare when you get something,” he said.

If someone has a family history of a primary relative (mother, dad or sibling) having skin cancer or unusual moles removed, that can increase the risks of developing skin cancer by about 50 percent.

He recommends full body exams at least once a year, every six months or even three months for people with a history of skin cancer or abnormal precancerous lesions. If any suspicious-looking growth develops, don’t wait, get it checked.

According to Roos, the journals that he reads indicate the rates of skin cancer have been rising. He cited some statistics from www.skincancer.org.

– One in five Americans will develop skin cancer in their lifetime.

– The treatment of non-melanoma skin cancers (basal and squamous cell) increased by nearly 77 percent between 1992 and 2006.

– One person dies of melanoma every 57 minutes. This is the most aggressive and dangerous form of skin cancer.

So, what do all the letters and numbers (UPF 50+ or SPF 30+) mean on sunscreen labels, hats and clothing?

Roos puts it in perspective. Sunblocks are rated with SPF (sun protection factor) and UPF (ultraviolet protection factor) which is the ultraviolet radiation in the sun’s rays that damage the genetic material in our cells. These rays are invisible, but are in the streaming white light seen coming from the sun.

According to www.skincancer.org, ultraviolet radiation is made up of UVA, UVB and UVC rays with different wavelengths and strengths in how they penetrate the skin. The site also said that UVC is not a concern for skin cancer since it is the shortest wavelength and is filtered by the ozone layer and doesn’t reach the surface of the earth.

Roos further explained that the Food and Drug Administration has been trying to make efforts in clarifying some things. The SPF’s are usually ratings of the protections against ultraviolet B. But then there are ultraviolet A, B and C rays with A really not indicated in SPF ratings, even though skin cells can be damaged from both A and B, the latter being the most common for causing skin cancer.

The FDA has been trying to come up with a rating system, for example, SPF 50 with a rating of so many stars indicating how a particular sunscreen blocks against UVA rays.

When talking about physical barriers such as hats, shadings and protective clothing with UPF ratings, Roos said then you are blocking, to some extent, UV rays whether A or B in a different manner from sunscreens. Many of these rated fabrics are treated with some type of ceramic coating to physically block the harmful radiation that may pass through normal untreated materials. There are many websites and outdoor stores that offer sun-protective clothing.

“Typically before, people would say well I’m okay ‘cause I’m wearing a white tee shirt and that area is not being exposed,” Roos said. “So, just a plain white tee shirt, ‘cause there’s fabric there. But, there are spaces in the fabric and they say that really typically only gives you a SPF or a sun protection factor of an eight or 10. No one really goes out and puts on a SPF eight to try to actually protect themselves, but they don’t know that some forms of clothing are inadequate barriers.”

The same can be said for baseball caps. Roos agrees the bill or brim may offer some protection to the face, but that is not sufficient coverage for the ears, neck or baldness. He recommends a wide brim full fabric hat in addition to sun-protective clothing and of course, using sunscreen.

Individuals should avoid as much direct sunlight as possible between 10 a.m. and 4 p.m., especially during the hottest time of the year when the ultraviolet rays are much more aggressive, summer which begins on Sunday.

Roos said many companies will provide some type of uniform or protective clothing (full-sleeve shirts etc.) for employees who work outdoors during the peak hours of sun exposure. That’s where treated fabrics and UPF ratings are important.

It is confusing for individuals to decide which sunscreen is appropriate for them and their family. Why a 50, a 70, a 100 or even a 110 SPF? One size does not fit all—it depends on their skin type as described earlier by Roos.

For people with skin type one, two or three he recommends at least a 50 SPF and the use of products that last longer if someone will be in the sun for an extended amount of time. Sunscreens should be reapplied after two to three hours especially while swimming. Most products will break down by absorbing or reflecting light energy away from the skin. Depending on their ingredients such as zinc oxide, some may work better than others.

“People are often astounded that there is a 110 SPF,” Roos said. “The thing is that again, that’s not something that everyone needs, but the least amount of radiation to your skin is generally probably the better of the choices. And these things are all tested and approved by the FDA to basically verify their claims that they block that much radiation.”

Also, the American Academy of Pediatrics recommends that infants under six months be kept out of the sun altogether.

Mario Serna, owner of Maserios Landscape Maintenance wears a hat, long pants and shirts with full sleeves to protect himself from the sun and branches. He also carries sunscreen in his truck which he shares with employee, Abel Mendoza. Serna said the sunscreen ratings are confusing and they buy whatever they can afford or what they saw on TV.

“So, can people with different skin tones share and use the same one, or me and my wife, me and my sister, or my friend,” he said. “Oh, maybe we need to have one for each one.”

For more information on skin cancer and sun protection go to www.skincancer.org, The American Academy of Dermatology (www.aad.org) or The American Cancer Society(www.cancer.org).