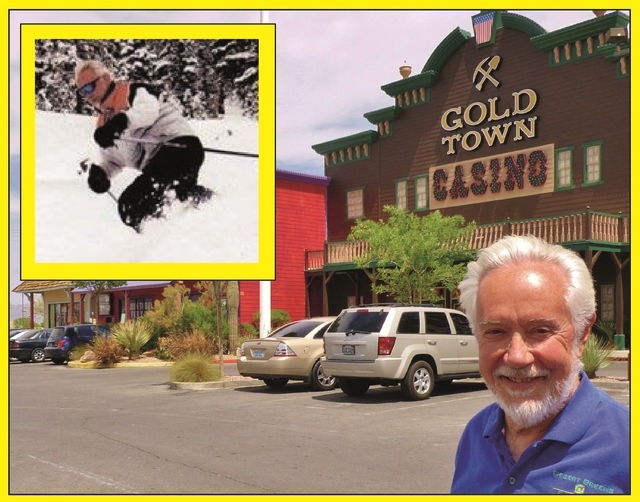 They say it’s a lot like Granville, Mass., their hometown.

And they mean that in a good way.

When the Egertons sought a place to spend winters in retirement, they tried Las Vegas.

Stuart Egerton, 72, said “Vegas is a great place to visit,” but he and Evelyn, 71, didn’t want to live there. “Pahrump has a small-town feel, similar to Granville.” Although Pahrump’s population is around 38,000, life there isn’t influenced by the “24-hour hustle-and-bustle of the city,” he said.

There are casinos — it is Nevada, after all — but streets of landscaped suburban neighborhoods stretch toward the sunset and California. Pahrump lies in the Mojave Desert just west of Spring Mountain. The town’s name comes from a Shoshone word for “water rock,” descriptive of abundant artesian wells in the valley. Vegas is 60 miles to the east; Death Valley equidistant to the west.

Summer temperatures in Pahrump hover in triple digits, so the Egertons return to their RV, parked at Sodom Mountain Campground in Southwick, in order to spend time with children and grandchildren living in Western Massachusetts. But as fall works its way into the foothills of the Berkshires, the Egertons return to Nevada so Stu can ski and teach.

Ski? In the desert?

“We ski up there,” Stu gestured as he sat on the deck of their home in the Pahrump subdivision of Desert Greens. In the distant hills to the east, snow hugged the slopes of Las Vegas Ski and Snowboard Resort, which operates December through April. With peaks as high as 11,000 feet, the resort averages 20 feet of snow each winter.

The Egertons were featured in a Lollygagger@large column published in 2006. They retired in 2000, Evie after more than 27 years with Wackerbarth Box Shop in Granville; Stu after 25 years with Hamilton-Sundstrand in Windsor Locks, Conn. They sold their Granville home to live and travel in a large fifth-wheel trailer. They’ve been married 52 years.

“When we first started RVing,” Evie said, “I dearly missed everyone, especially not being there for all those firsts with the grandchildren. But, as with all things, you adjust. And you do find that when you are able to spend time with family it is extra-special.”

“Living in Pahrump,” she said, “is wonderful. … When a storm approaches, you can see it long before it reaches you. Rain is an event that you run out into the street to experience. The snow on the mountains is beautiful but I do not have it at my door to shovel. I have fallen in love with the vastness of the area.”

Evie has also embraced social activities in the community. “People here are from all walks of life and all have interesting backgrounds. Most everyone is from someplace other than Nevada and came here to escape the cold, snow and ice or the high cost of living in their home state.”

Stu didn’t take up skiing until he was 46, learning on slopes near Granville; he was teaching by the time he was 50. He is a good-natured guy, soft-spoken and easy-going.

“I believe I was hired (as an instructor) because of my communication skills, not my skiing ability. … I had to be able to describe the movement, and also needed to provide good demonstrations.” After a few months, he determined he “really loved teaching and the interaction” with students.

“That first winter (in Nevada) we made a lot of friends in the RV park and in Las Vegas because of the ski area,” he said. This will be Stu’s 15th season teaching at the resort.

Two years ago Stu became a member of the board of directors, then was elected president of the homeowners association of the community in which they live.

“Everyone in this little housing community knows my passion for skiing and that weekends are my time to get to the mountain. It’s pretty easy to balance the demands of the board with the skiing.” His term expires at the end of the month, he said, and he is looking forward to whittling down the “Honey-Do” list Evie has been compiling for him.

This article first appeared in the The Republican of Springfield, Mass., and on the www.masslive.com website Dec. 20. Norm Roy, a retired production editor for The Republican, lives and travels in a motorhome. He is eager to hear from readers about their own travel adventures. His e-mail address is: lollygaggeratlarge@gmail.com.