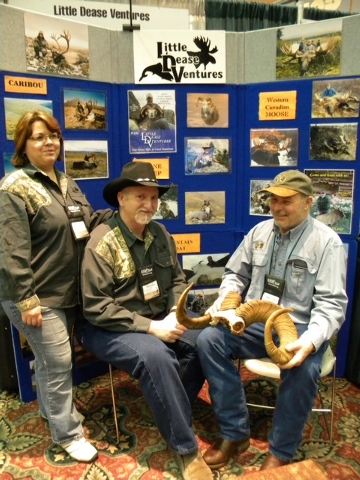 New Year’s resolutions are easy, but require action, so let’s get going.

It’s time to start researching and planning this year’s hunting and fishing activities. This is also the season of outdoor conventions and banquets. You’ve been reading about some of them in this column and it’s an excellent chance to get together with friends, new and old.

The food is always good and there are lots of raffles and auctions at the banquets, while the conventions have demonstrations and displays of the latest equipment and places to travel. For us art lovers, you’ll find some of the world’s greatest artists with their latest works.

And then there are the stories; my favorite was at last year’s Wild Sheep Foundation and told by a gentleman named Dave. I was doing a book signing for “Sportsman’s Quest – the Book” when he made a couple of positive comments and asked for a signed copy. Well, that’s what I was there for, so I asked him his name and if he was a hunter. It went like this, “Do you hunt?”

He responded, “Yes.” “Where have you hunted?” I asked.

“Brown bears in Alaska; Grizzly in Canada; Ibex in Mongolia; Asian deer in Japan and Red Stag, Tahr and Chamois in New Zealand as well as four trips to Africa,” he responded.

Not bad for a Texas “good ol’ boy” and former F-15 pilot whose father was a general. Yep, this guy hunts.

Over the next several days we swapped stories, but he won. He told of a Wyoming antelope hunt. He was bow hunting and had his mind set on a particularly big one. After passing on several, he found the need to answer nature’s call and headed for a bush.

Soon his friend called, “There he is.”

“I don’t have my bow,” Dave responded.

As his friend tossed him a rifle he said, “Shoot it.” Dave aimed and shot, as his Wranglers were down around his ankles. The giant antelope dropped.

At some of the recent shows I was also able to see and handle some of the latest rifles; that Sako .416 is sweet and not as imposing as I had imagined. The folks from Case Knives are always great to visit. They are famous for their traditional pocket and hunting knives, but also have several new lines for those who prefer the modern style. I’ve carried my grandfather’s Case pocket knife since I was a kid and it still serves me well, with more than a few fond memories.

It was also great to see old hunting and fishing friends who guide from Spain, Africa and South America. All are good story tellers and you’ll read of some in future columns.

Nevada sportsmen are especially fortunate to have several of the largest conventions here in the Silver State. From the Shooting, Hunting and Outdoor Trade show (SHOT Show) to Safari Club International (SCI), the Wild Sheep Foundation and the Ovis Sheep Convention

We also have our local banquets for SCI, Wildlife in Nevada (WHIN), The Fraternity of the Desert Big Horn, the Nevada Sportsmen Unlimited, Wood &Water and many others.

These are the places that give us the opportunity to connect with like-minded sportsmen, learn of new and great places to hunt and research places for new opportunities locally and around the world.

This is also the time for you, or family members, to take that all-important and required hunter safety course; learn of the areas you plan to hunt or fish and any new regulations. Has fire or drought changed the habitat conditions? Can you get the time off from work?

It seems every aspect of our lives has gotten more complicated, and as they say in poker, “one must either fold, or play the game.” I plan on playing.

Preseason scouting is also essential; put on a light pack and spend some time in your favorite areas. Things change. Better still, choose a friend who knows a new territory, or explore one together. This is what lasting friendships are based on. Don’t forget the family; time spent in the woods or wilderness will be some of the best bonding time and remembered longer than watching that TV program.

I find myself also hunting farther afield due to the difficulty of drawing my favorite tags.

If you have relatives in the south, central or northern states consider combining a hunting/fishing trip with a family vacation. Heck, you may even have some friends you can mooch off of during a prime hunting and fishing time until your welcome wears out, and then visit another – sounds good to me.

This is also the “quiet season,” a time to dream of near and far off places, read some of those outdoor magazines that have been piling up on the coffee table, clean gear, organize and put “stuff” away. It’s time to visit friends and tell stories of the past and coming year.

Perhaps this is the year for that “Big Trip.” I’d better do it while I still can. If not now, when?

Who knows, maybe dreams can come true if we give them a little help. Yep, this could be a very good year.

Please email if you have any thoughts or want to share pictures, or a story of your hunting and fishing adventures, dansimmons@usa.net.