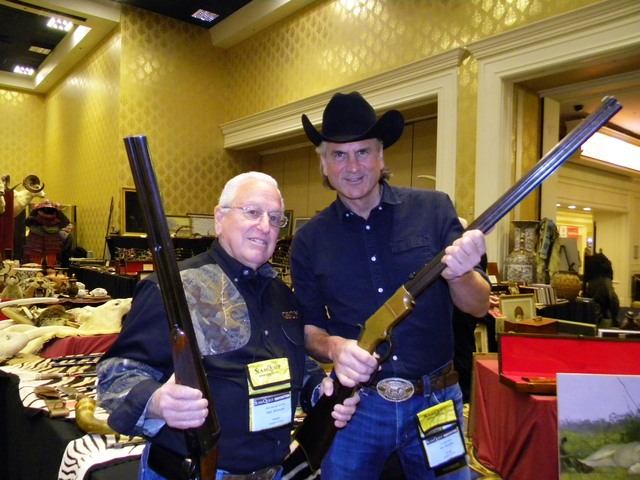 Hunting guide, outfitter and TV host Jim Shockey, on right, of “Jim Shockey’s Hunting Adventures” and producer of “Uncharted” will be attending most of the upcoming hunting conventions and events, and you can enjoy talking to him about his world adventures. Special to the Pahrump Valley Times

January and February are the traditional months for conventions and banquets and this year is no different. Nevada sportsmen are especially fortunate to have several of the largest national conventions here in the Silver State.

The 2017 Shooting, Hunting and Outdoor Trade (SHOT) show and the Nevada Sportsman’s Unlimited banquet have come and gone.

Of special interest at the SHOT show was the advances to the Rokon trail bike to make it quieter, stronger and more efficient. My hat’s off to owner Tom Blais and the interest the military has in this tough, unique off-road cycle.

We hear much in the news about the recession and tough times, but there was no evidence of this in the halls that I haunted. Hotel rooms were filled at exorbitant prices and buyers from both large and small retail outdoor stores were busy ordering the latest outdoor “tools and toys” for their customers back home.

Hundreds of firearms manufacturers were also in attendance to showcase their newest innovations and offerings. Times are good in the outdoor sports industry.

A major positive change, from my perspective, was noticeable in the increased emphasis on traditional hunting firearms with lighter/takedown models and traditional finely-crafted wood stocks. This shift in the hunters’ market may reflect a desire to reach back to a simpler time. It may also be in response to a greater number of traveling hunters and those packing further into the woods and wilderness, both of which are positive responses to greater local pressures and the increased difficulty of drawing those elusive tags.

This recognition may best be exemplified by manufacturers like Wild West Guns of Las Vegas; you may recognize them from their popular Alaska TV show. Their big game rifles in the sub-five-pound range and their take-down models of some of the most popular traditional rifles made them a favorite at the convention.

While at the Nevada Sportsman’s Unlimited banquet it was also great to visit with Ryan and Vicky Werner of Henderson’s Werner Taxidermy. Their dedication over the years in the name of conservation is outstanding.

As we continue this convention season, it’s exciting to see all of the new products and services while reacquainting ourselves with old favorites. It’s also comforting to know that the beverages are still the same, as are the friendships, both old and new that we enjoy at these events.

As we move into this weekend and the next few weeks, I look forward to spending time with some of these friends and sharing one of those beverages. I encourage you to visit with them also.

Hunting guide, outfitter and TV host Jim Shockey of “Jim Shockey’s Hunting Adventures” and producer of “Uncharted” will be attending most of these events and you can enjoy talking to him about his world adventures. The renowned hunter and explorer Chris Klineberger will be at the SCI (Safari Club International) convention and will be found autographing his great book “Gamemasters of the World” at Ludo Wurfbain’s Safari Press display area.

I would also not want to miss the many great outdoor and wildlife artists at the show, like Michael Sieve, John Seery-Lester, Trevor Swanson, Kobus Mooler and many more. It’s a great art exhibition for hunters and outdoor sporting enthusiasts.

Another change at these banquets and conventions is the increased presence of fishing lodges and international fishing opportunities. Most notable are those from Central and South America, where great numbers of marlin and sailfish can be found along with many of the other great tropical fish.

Canada and Alaska continue their excellent salmon and halibut fisheries. Thanks to quality fisheries management, these fisheries have remained great in both quantity and quality.

Africa was previously not given much attention by sportsmen who were most interested in hunting, but with the changing demographics of American and European sportsmen, as well as a greater emphasis by African lodge owners, they are becoming one of the most challenging and sought-after prizes for the traveling fisherman.

That’s not to say the safari is not popular. There’s still nothing that can compare with a hunt on the African plains for kudu, zebras, impalas, and the ultimate hunting experience, cape buffalo.

Bottom line, all of these opportunities and dreams can be explored, and begun, at the this week’s SCI Convention or one of the upcoming banquets.

For more information Google the above individuals, groups or companies.

If you have a story or something to share, e-mail me at dansimmons@usa.net