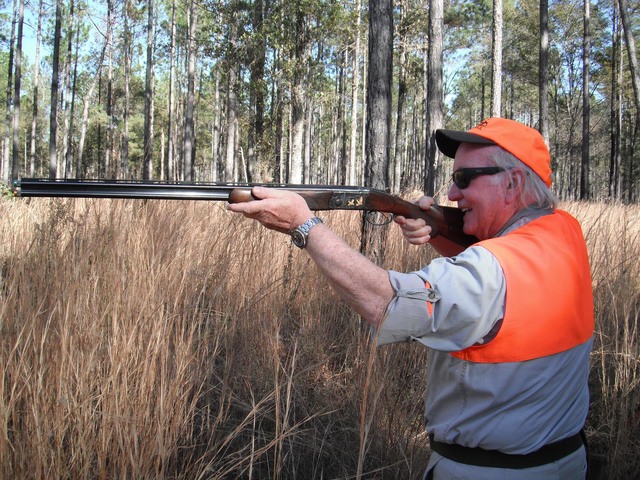 Hunter Emil Girardin is "on a bird" as he lines up his shot during a recent southern bobwhite quail hunt in Georgia. Dan Simmons/Special to the Pahrump Valley Times 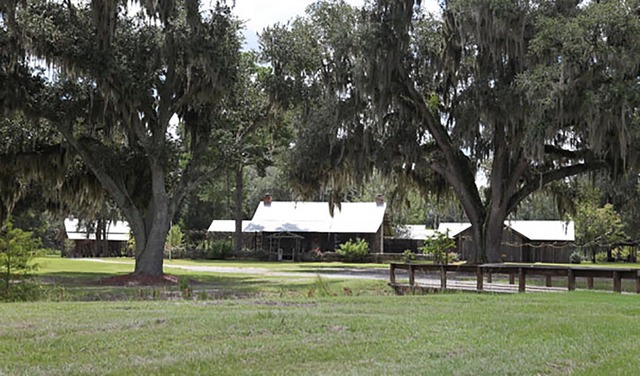 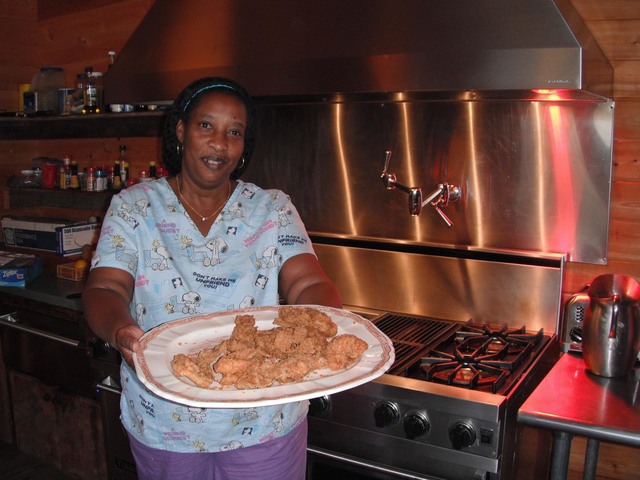 Real Southern fried chicken, a favorite of visitors to the Ford Farm lodge, is one of the many authentic touches offered at the Georgia hunting adventure. Dan Simmons/Special to the Pahrump Valley Times 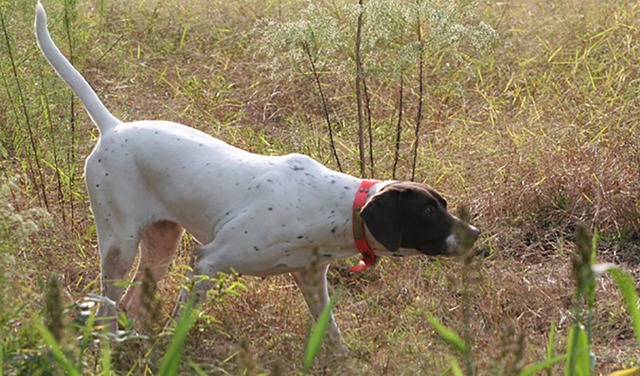 Spot, an English Pointer, struck the first birds and he went stiff with his tail raised and his nose pointed forward, the classic pointer form. Dan Simmons/Special to the Pahrump Valley Times

It was an afternoon of dogs coursing and pointing, hunters shooting and occasionally a bird falling.

I’ve done a fair bit of dove, western quail and pheasant hunting, but these coveys of bobwhite quail bust from the bush at warp speed and thunder in all directions. They are in a league of their own, as I’ve read many times, but now believe it, but let me start at the beginning.

It all started when nationally-acclaimed muralist Andrew Sabori invited me to participate in the opening of his new art gallery in Lakeland, Georgia where he recently took up residence. With the invitation was the opportunity of a plantation bobwhite quail hunt. Well, with an offer like that and a book signing at his gallery included, I considered it for about 30 seconds and booked my flight.

I was on my way to Lakeland, which is just outside of Valdosta, home to cotton fields, blueberries, almond orchards and that famous Southern hospitality.

Soon after my arrival, I was introduced to Larry Lee, the owner of the historic Ford Farm and an immediate bond was formed, as is often the case when like-minded hunters get together. I had met a new friend and hunting partner. The introduction was followed by an invitation to join a party of local hunters, which was immediately accepted.

I was met the next day at the lodge by our guide, Ashley Luke, and we began the afternoon hunt with lunch and my first real southern table of fried chicken as only the South makes it, mustard greens with pork and spices, field peas and the best sweet tea I’ve ever tasted. I must admit all of these dishes were new to this western boy from Nevada.

But, this is a hunting story, so let me continue where I started.

After lunch, we climbed into a uniquely-designed hunting buggy which accommodates the hunters, dogs and our guide. Arriving at an open pine forest with brush thickets we stopped and the dogs knew it was time to work. As we disembarked the dogs were released, but stayed close to the guide and were obviously excited, but knew they must wait for the guide to give them the signal. They were then off, followed closely by us, the hunters.

I need to mention my original thought for a title, “Stump holes, tangles and briar patches.” I discovered many of these obstacles and after picking myself up a couple of times, to the amusement of my new friends, I learned the Southern Pines Walk. I noticed the other hunters raised their boots each step and placed it heel first on the ground rather than shuffling forward. I finally caught on with only my ego bruised and thankfully no pictures.

Now back to the dogs as they coursed first in one direction then another until they picked up the scent. It was Spot, an English Pointer who struck the first birds and he went stiff with his tail raised and his nose pointed forward, the classic pointer form. The others keyed on him as did the hunters. Then Diesel, a well-trained black lab, was given the signal to “jump the bush.” It was then like fireworks with seven bobwhites busting from the bush in all directions. The fireworks noise was provided by the two hunters ready for them.

The .410 shotgun’s mild voice spoke to my left and a bird fell as the .28 gauge spoke with a bit more authority to my right and another bird fell. The dogs were away on command and on the quail before I fully recovered from the adrenaline rush caused by the flushed birds.

Diesel retrieved the first bird and gave it to our guide, Ashley Lake, as another was retrieved by the English cocker spaniel, Spot. This was the southern bobwhite quail hunt I had read of and imagined, but this was the real thing superior to the hunts of my dreams. My first hunt and I’m looking forward to another chance in the new year after spending some time on the range with some clay birds.

If you’re looking for the next adventure, try this one. The Ford Ranch is an excellent place to start and to return to as often as possible. It’s more affordable than expected and the action never stops; best of all, however, is the hospitality and folks in Lakeland, Georgia with its charming town and historic three-dimensional murals.

For more information on the Ford Farm go to www.thefordfarm.com

If you have a story or comment about this or other articles, please contact me, dansimmons@usa.net or give me a call at 775-727-9777.

Dan Simmons is a Pahrump resident and an avid outdoorsman.

We often think of the Southwest as the home of the barbecue, but the South’s long “Chillin’ and Grillin’” tradition for food and beverages is also the thing of legend.