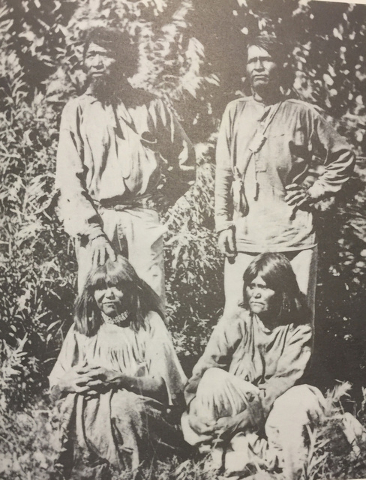 Editor’s Note: This is the second article of a four-part series on the first inhabitants of the Pahrump Valley. The first article ran July 22.

When first contacted by European whites in the late 1700s, the Southern Paiute occupied a vast area that included present-day southwestern Utah, southern Nevada, part of northwestern Arizona, and a chunk of southeastern California, extending northward from Blythe to Death Valley.

It is said there were 16 Southern Paiute groups—or many more, depending on how they were identified. Though they had ties, the Southern Paiutes of the Pahrump and Las Vegas valleys were never unified as a single band.

The native population density of the region was very low, not unexpectedly, given the demanding environment the desert dwellers occupied. In 1870 the population estimate for “Las Vegas vicinity,” an area encompassing 9,450 square miles, was reported to have been 332, about 28.5 square miles per person.

The outcome of continued contact soon proved to be devastating for the native people. For example, extensive research documents that institutionalized slavery and other forms of servitude were imposed by the Spanish.

Southern Paiutes may have been held as slaves in Santa Fe and outlying colonies by the Spanish as early as the late 1700s. The fact that the Spanish Trail led through the Las Vegas Valley only made matters worse for nearby Southern Paiutes.

By 1839, they were “hunted” in the spring of the year, when they were “weak and helpless,” fattened, carried to Santa Fe, and sold as slaves. Teenage girls brought a higher price than males.

Because of such practices, it was said scarcely one-half of the Paiute children were permitted to grow up with their parents, the majority being males. The entry of Mormons into the area led to the end of the slave trade there by the mid-1850s. By the mid-1870s, most Southern Paiute had been under “direct and sustained contact with settlers” since the 1860s.

The greatest asset of the Southern Paiutes of the Pahrump and Las Vegas valleys was the Spring Mountains, whose highest point is nearly 12,000 feet in elevation. There they gathered pine nuts in the fall, which tended to be a time of plenty. Tracts of trees were owned by men and inherited by their sons. Trespass could lead to fights.

The village chief announced when the nuts were ripe, but had no authority over gathering. Families traveled alone or in small groups to their gathering sites and might remain there until snow made further effort unprofitable. Most returned to the village in the valley in winter.

Woman did the picking on their husbands’ land, pulling cones from trees with long poles with a fire-bent hook at the end. Cones were stored in the mountains in brush- and grass-lined pits covered with grass, brush, and earth. Nuts were transported to the winter village.

A wide variety of other plant foods were used. People collected sand bunch grass spears and, in August, mesquite and screw beans. They cultivated corn, squash, beans, and sunflowers. In no place were either wild or cultivated foods sufficiently abundant to make for permanent attachment to a locality.

Hunting seems to have played a very minor role in Southern Paiute survival. Rabbits, turtles, and other animals were utilized, and there were occasional communal antelope and rabbit drives. Rabbit fur blankets were prized.

The annual fall festival is believed to have been the most important Southern Paiute group activity in pre-contact times and served to unite several villages. In more recent times, it was held at Manse, Pahrump, Las Vegas, or Moapa. Visitors came from as far away as Beatty and San Bernardino.

Trips were made with horse and wagon. The event was announced six or eight months in advance and lasted three or four days. It was planned and directed by the chief, who made speeches while dances and rites took place. The last fall festival is said to have been held around 1910.

The arrival of Europeans in Southern Paiute country led to the introduction of the horse, which greatly aided transportation, leading to more communication and cooperation among people. The resulting bond between families and the cohesion it led to far outweighed any conflict that might emerge between members of different villages.

The basic unit of Southern Paiute social life was the family. Marriage was mostly monogamous, though there were cases of multiple wives or husbands. Newlyweds tended to remain in the groom’s family’s area. The Southern Paiute were “notably pacific,” with few weapons, and warfare was likely unimportant to them.

They believed illness was caused by intrusion of objects into the body caused by a malevolent ghost or shaman. Mourning ceremonies, or “cries,” were held for the deceased and the mourning period could last from three months to a year.

Arts focused on songs, recitations, and folk tales, which were narrated by men. The coyote was an important character in Southern Paiute mythology and folktales. The coyote character was a trickster and seducer of women.

The people made their clothing of animal skins and vegetable fibers. Dwellings were technologically simple, constructed of tree limbs and brush, sometimes with mud or animal skins for cover. Doorways usually faced east. In hot weather people often lived in the shade of a tree.