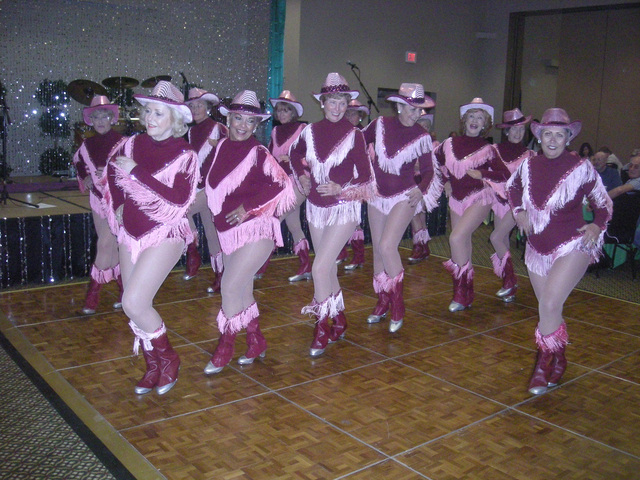 One event on the Christmas calendar, the Nevada Silver Tappers’ annual Christmas benefit show, was traditionally held the first Sunday of December.

This year, however, it was bumped to this Saturday, at the Saddle West Hotel and Casino, due to another scheduled event at the property last weekend.

The event takes place at 3 p.m. and 7 p.m. Members of the Nevada Silver Tappers and the Ms. Senior Golden Years pageant will serenade those arriving with Christmas carols beginning 30 minutes before the show.

Tickets are $10 and may be obtained at the door.

Nevada Silver Tappers founder B.J. Hetrick-Irwin, who will turn 90 next year, will present a $3,500 check from the USO Show in November to the NyE Communities Coalition for veterans in crisis. Proceeds from the Christmas show will be split with half going to homeless children in Pahrump and the other half going to two causes: the Rock Cancer Fund, which provides transportation and lodging for cancer patients undergoing treatment in Las Vegas or Los Angeles, and the Symphony Animal Foundation.

Past Christmas benefits have raised funds for band equipment for Beatty High School, paying teachers’ out-of-pocket expenses, helping a family left homeless after a fire, to money for a three-year-old girl with cancer.

Sears said the group hopes for a lot of walk-up purchases.

“The response isn’t good because it conflicts with too many other things going on,” Sears said. “Our ticket sales haven’t been terrific.”

The Pahrump Valley High School Junior ROTC will present the colors, and Ms. Senior Golden Years 2014 Sandy Stell will light the Christmas tree to kick off the event.

The Dazzling Silverettes, an offshoot of the Nevada Silver Tappers, will dance to the traditional classic “Sleigh Ride.”

A few singers will entertain. Ronnie Fabre will sing “Santa Claus is Coming to Town” accompanied by keyboardist Tommy Deering and later in the show sing, “Somewhere Over the Rainbow” from the Wizard of Oz.

Another guest performance includes two dancers from Dance Expressions, Alia Bolton and Cassandra Dittrich, who will perform a jazz dance. Bolton will dance to a traditional ballet favorite from the Nutcracker Suite “Dance of the Sugar Plum Fairies” while Dittrich dances to “Winter Wonderland.”

The Nevada Silver Tappers take the stage dancing to “That’s Entertainment” attired in showgirl costumes. Stell will lead the Silver Tappers later in the show performing to “All I Want for Christmas Is You.” The group will dance to “Baby It’s Cold Outside” and finish up with their signature wooden soldier routine.

Jackie Greco, the 2005 Ms. Senior Golden Years, will perform a comedy act, a takeoff on the show “I Love Lucy.”