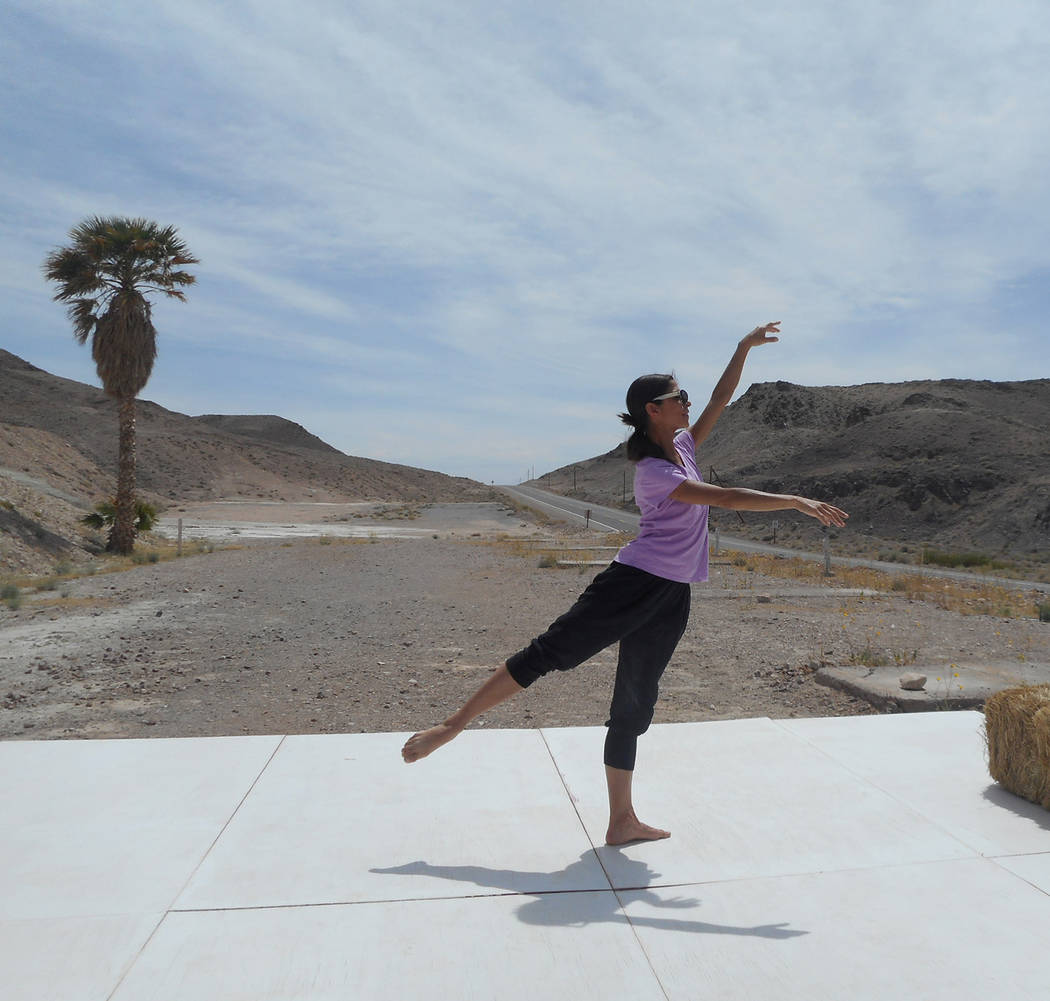 Robin Flinchum/Special to the Pahrump Valley Times Dancer Jenna McClintock is practicing for an upcoming show. The upcoming shows are scheduled for May 13 and May 14 and May 19 and May 20. 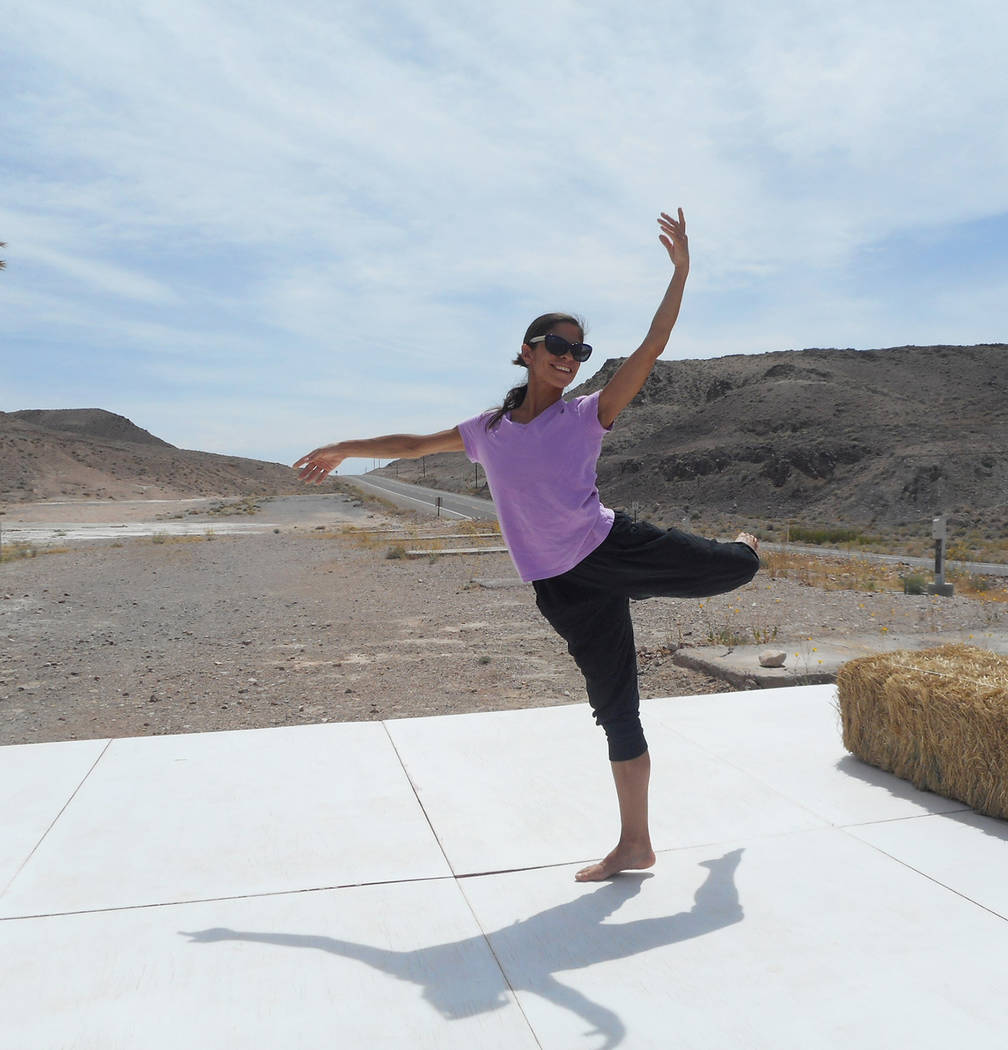 Robin Flinchum/Special to the Pahrump Valley Times Dancer Jenna McClintock is practicing for an upcoming show. They are scheduled for May 13 and May 14 and May 19 and May 20. 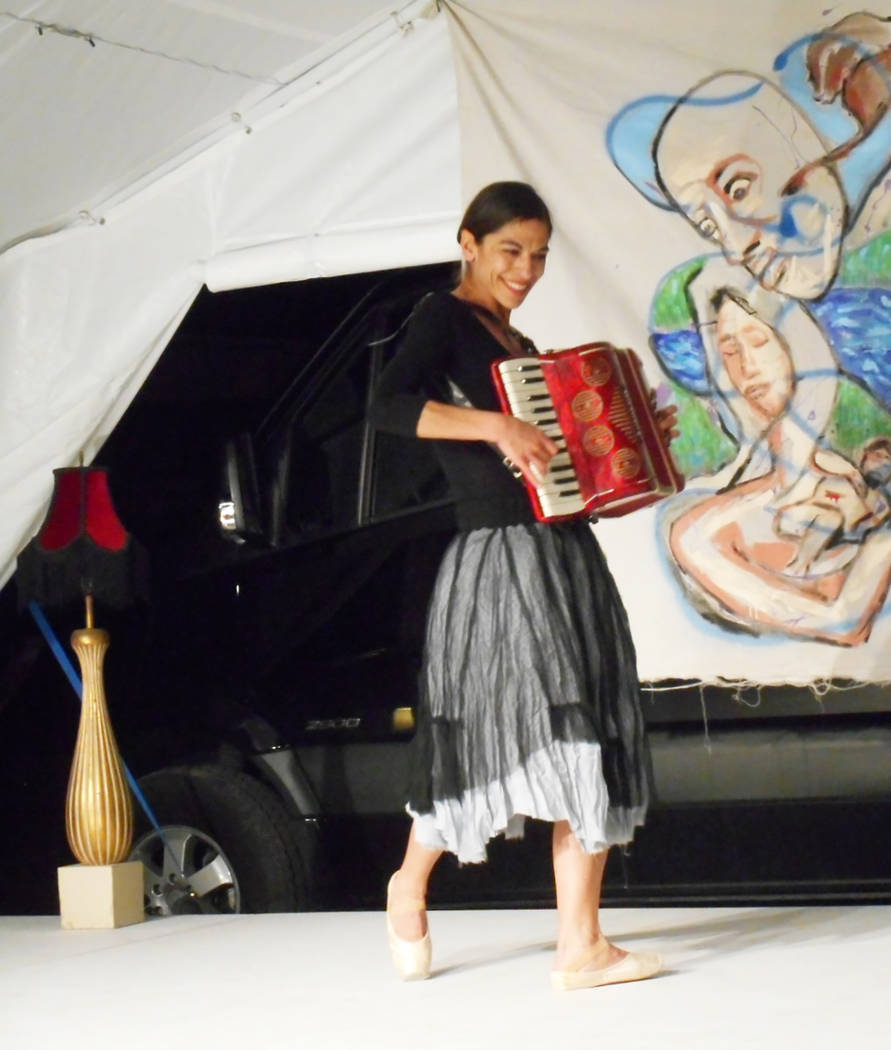 Robin Flinchum/Special to the Pahrump Valley Times Jenna McClintock dancing on the uncovered stage. They are scheduled for May 13 and May 14 and May 19 and May 20. 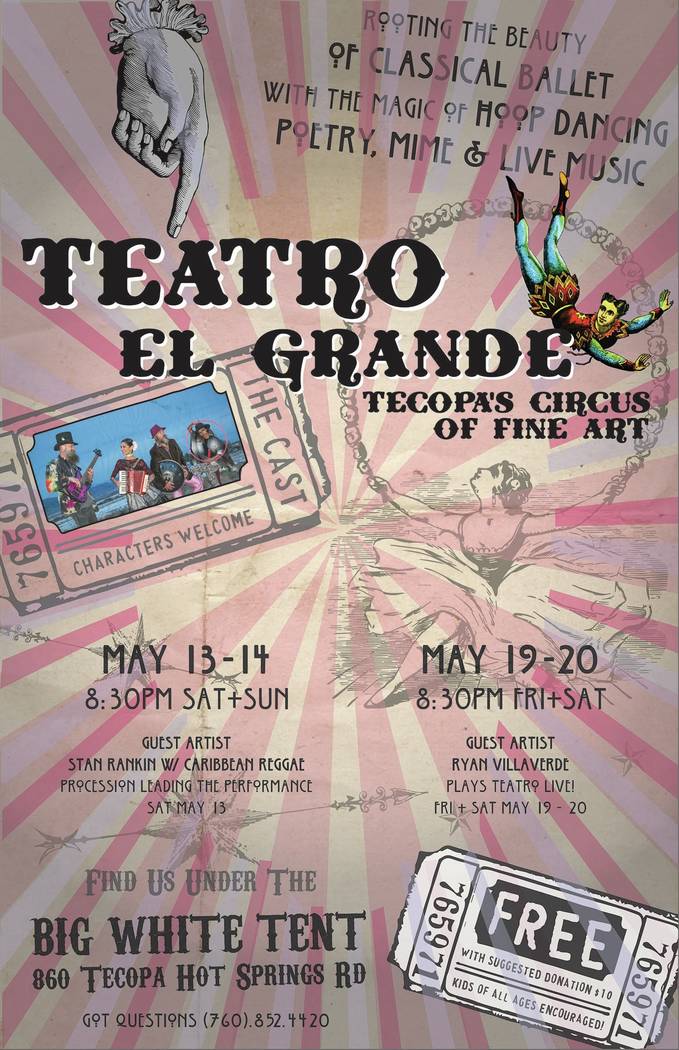 The upcoming shows are scheduled for Saturday and Sunday, May 13 and 14, and May 19 and 20. The program, Jenna McClintock says, will be essentially the same as the debut show. Some of the music, however, is different and the pantomime role of co-creator Jim Furlough is expanding.

On a bare board stage in Tecopa, exposed to the sun and rushed by the fierce desert winds, dancer Jenna McClintock is practicing for an upcoming show.

Come show time, an enormous white tent will cloak the stage and its array of folding metal chairs, creating a separate world in which this homegrown circus comes alive. But at the moment it’s just McClintock alone. She comes here nearly every day to dance and sometimes, she says “just to think.” She daydreams about the future, about adjustments to the show, and about opening a local performance school and taking Teatro El Grande on the road.

Sometimes she dances against the wind, straining every well-trained muscle to keep herself en pointe. Other times she imagines choreographing and performing her steps in the wind’s flow.

McClintock, formerly of the Oakland Ballet Company, danced for desert legend Marta Becket at the Amargosa Opera House before coming to Tecopa two years ago.

With Becket as a formative influence, it wasn’t surprising that McClintock could envision creating a desert theater literally from the ground up.

In Tecopa, “the people, the friends, the family I’m making here feel like my tribe,” McClintock says. Together they built a stage, purchased the tent and figured out how to pitch and anchor it against the winds, and how to make magic out of thin desert air.

Teatro El Grande’s debut show in February, held under the big top on the grounds of the Tecopa Hot Springs Resort, drew standing room only crowds nearly every night. McClintock says she was ‘pleasantly surprised’ by the turnout and by the warm reception her troupe received in the Tecopa community. “I feel a responsibility now,” she says, to keep up the standard set by those first performances and to keep the inspiration alive.

The program, McClintock says, will be essentially the same as the debut show. Some of the music, however, is different and the pantomime role of co-creator Jim Furlough is expanding.

“The adventures of those characters you saw from the last show will be more.” Tecopa local Kayla Thomas does a mesmerizing hoop dance and resort owner Amy Noel reads poetry in between acts.

She doesn’t always know exactly how everything is going to come together, but “once you get out there,” McClintock says, “it just happens.”

McClintock says she’s learned a lot about the mechanics of dancing on a stage only a few inches above the bare desert floor. The stage was built with the help of friends and neighbors and has a ‘sprung’ floor, meaning it gives with the impact of the dancing. Because the surface is made of joined pieces, it caused some difficulty for McClintock during the February performances.

She “made a game of it,” she said, dancing to hit on either side of the potentially foot-pinching seams. The stage has since sustained some water damage and weathering, but McClintock and Furlough, with the help of their friends, will be repairing and repositioning the flooring before the Mother’s Day weekend.