Thank you for your service.

You’ve said that many times recently, and meant every word to every soldier.

And once you’ve read “Grunt: The Curious Science of Humans at War” by Mary Roach, you’ll also thank those who serve our servicemen and women.

Chickens are not ducks.

Nevertheless, chicken carcasses are what the U.S. Military uses to test its equipment to ensure that it’s safe from “birdstrike,” which describes those instances when flying bird (duck, goose, even starling) meets flying machine. Birdstrike kills more than just birds, so the military needs to know its equipment can handle feathered foes – therefore, it uses a “chicken gun” to shoot pullets, not bullets.

And that, says Mary Roach, “is most of what I have to say about guns.” Instead of focusing on artillery and battles in “Grunt,” she focuses on the fight to keep our troops comfortable, hydrated, healthy, and alive.

While it might seem easy, for instance, to outfit many thousand people in identical clothing, what our troops wear is a kind of weapon. The U.S. government hires fashion designers to develop uniforms that are weather-appropriate, as fireproof as possible, and that can repel chemicals. Even the buttons are tested extensively: “specifications,” says Roach, “run to twenty-two pages.”

As for the vehicles troops use for transport, Roach says that engineers must constantly modify them for the safety of our soldiers. That often means that Strykers carry up to five tons of extra protection on their frames, much of it tested on the cadavers of people who serve “without actually enlisting.”

Military scientists know how to protect the soldiers’ hearing, and other um, equipment farther below on the body; says Roach, “thanks… to the transgender community,” they know how to fix injuries there. Others strive to teach medics to think in the midst of chaos. They study diarrhea, sweat, bugs, stinky smells, and sharks. And they know that sleep is one of a military’s greatest defenses.

Camouflage is a familiar sight these days, and it’s usually worn by someone you thank for their service. For different reasons, the creators of camouflage deserve appreciation, too, as do others who keep soldiers safe. “Grunt” explains further.

Now, mind you, there are no vivid recreations of battles in this book, but author Mary Roach tells readers about the aftermath of battle. You won’t get specs on equipment, but she’ll tell you about how science has improved on the gear soldiers use. What you will get, however, is a curious-minded tour through the science of war and real, sometimes gruesome but always fascinating peeks far beyond the barracks.

And Roach does it with a delightfully lighthearted-yet- serious approach. Salute!

Supporting our troops is more than a verbal “thank you.” The surprise is that it also comes from laboratories, volunteers, manufacturers, and exhaustive research, and this book tells you how. If you love – or were! – a soldier you’ll want it, because missing “Grunt” would be a disservice.

5
What’s behind the vines at the Pahrump Valley Winery?

IN SEASON: The time is now to plan your fall and winter annual vegetable garden
By Terri Meehan Special to the Pahrump Valley Times

CHUCK BAKER: Land, Land, but not an inch to spare
By Chuck N. Baker Special to the Pahrump Valley Times 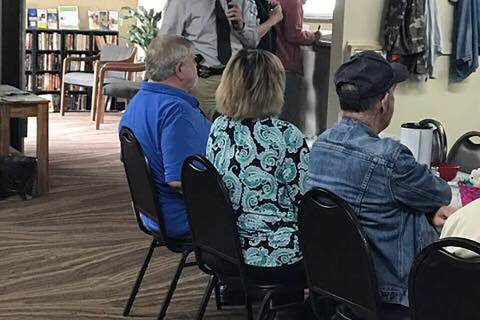