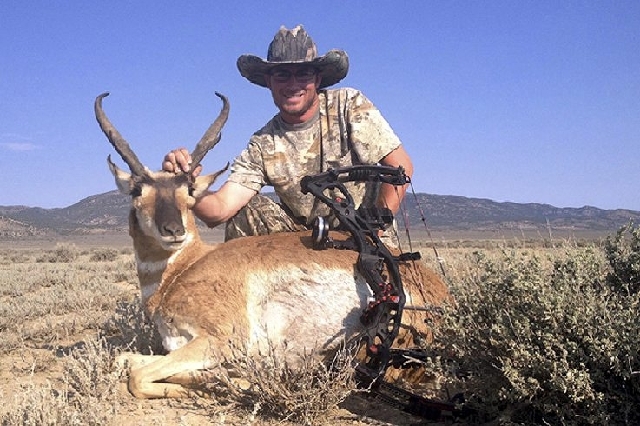 The anticipated letter from the Nevada Department of Wildlife arrived. Could it be notification of a successful tag or more likely another unsuccessful draw letter? Opening it the words jumped out; “successful draw for an antelope.” The other animals on the list were followed by that word beginning with “un.”

I am going to hunt antelope this month and need to get moving with the plans. I’ll use as my inspiration a story told to me by my young hunting friend, Andrew Miller, who I first met several years ago when teaching the hunter safety course.

Here is his antelope story, told in his own words. It’s my honor to be able to encourage this young and talented storyteller by seeing his adventure in print.

As told by Andrew Miller

I was off with a vengeance. This was three years in the making, and excitement ran high. As I packed the truck on Friday morning I triple checked everything. Before I loaded the most crucial piece of equipment —my bow — I decided to shoot one last time. I drew back, calm and careful; I was at the 70-yard line and at mid-draw I hear a pop! And felt a crack. The pop was part of my bow string. The crack was the sound of my nose breaking as my closed fist impacted my own face. The blood ran instantly, and panic set in.

I repaired the string, but I’ve never been so hesitant to draw my bow. My nock point was a touch-off. My draw was a touch longer but my arrows still flew true, thankfully. My hunt had officially begun — gear was loaded, trucks were fueled and we were off!

Arriving in antelope land I was overly eager. Pronghorn is one of my favorite animals to chase, but this was the first time with a bow and I knew the chase would be substantially more difficult.

The first hour into glassing I had spotted two antelope in a stalkable location and I was off to close the distance. Halfway through the stalk the clouds began to thicken and the temperatures were dropping rapidly. I heard thunder crack and within seconds the rain came pouring down. I was soaked, muddy, cold and soggy, and smiling from ear to ear. Having come from 117-degree temperatures, this weather was enough to call my trip a success.

I spent the rest of the afternoon in the tent enjoying the company of my father and the smell of wet sage as the rain continued.

The following morning I was too impatient to wait for the alarm clock to ring. With the vision of white throat patches and heavy black horns dancing in my head I was definitely awake and ready hours before daylight.

Spotters cleaned binoculars and I prepared my go-pack filled with what I needed to make rapid repeating stalks. I knew this was to be a game of persistence and I was ready for it.

What I did not know at the time was this was also a game of patience, and I seemed to have forgotten that at home. I’ll admit I blew it on day one, as I had made at least seven stalks, none close to bow range and I had used up plans A, B and C.

On previous scouting trips to the area, I spotted several trophy-class bucks and had them semi-patterned for the water they like to use. But with rainstorms daily, these antelope had no need to travel to their favorite springs.

I had tried decoys, knee pads, white flags and belly crawls. I even caught myself running behind and next to antelope, hoping they would tire before I did. Not surprisingly, their lung capacity seemed much greater than mine after a mile or two of sprinting. I believe it to be day four or five by this point and had yet to be in bow range.

I did some research online and had seen where horses could be used as decoys, and it seemed to work with ease.

Plan H (horse) was a go and I found a new motivation to get back after these long-winded prairie cheetahs. Horses were saddled and loaded and I was off to the same valley I had drug myself out of with little to no hope of ever being successful.

First stalk on horseback was much more efficient; after four hours I was 80 yards from an antelope that was sure to make eyes pop. Something about six legged horses made him uncomfortable and eventually he grew tired of us repeatedly cutting in front of his travel path and off he went. The horses needed water at this point so we rendezvoused at the trailer for lunch and discussed a new game plan.

We focused our attention on groups rather than single bachelors. To our amazement we were much more effective with this new tactic.

Within an hour we were able to focus on the largest buck of over 20 antelope. Slowly we would let the horses graze on the grass and every so often head in the direction of the antelope. Finally I ranged over the horse’s back and we were 150 yards with the whole group of antelope still bedded in the brown grass. Inch by inch we made our way closer 100, 80, 70 yards. “It’s working,” I said excitedly to my dad.

Finally a doe in the group had enough of us and slowly veered away and not long after she snorted. Everyone who has done spot-and-stalk antelope knows when you hear a snort, your heart drops. These animals have communication skills far beyond the credit they are given.

The buck I finally decided to focus on was now slowly grazing my way and within seconds I ranged him at 55 yards. I set an arrow, handed the reins behind me to my dad. I told him, “Hold on, I’m not too sure the horses will tolerate this.” He slowly pulled my horse away. I drew back; exhaled slowly; checked my bubble for level; opened my front hand and told myself, “Just like practice, this is it.” Slowly squeezing the release I sent a carbon stick at 300 feet per second directly at the animal. Everything went silent until I heard a bone crushing whack, and he made his run for the sun, away from the group; the animal seemed confused.

We watched him bed. I lost sight of his horns as his head was down, but I began to question everything that happened. “Was it a good shot? Was it quick and clean, as it should be?” I waited as archers must do.

I slowed my heart rate and let my instincts take over. I began patiently listening to crickets and watching the field mice. After half an hour my sore legs allowed me to find my antelope right where we had last spotted him.

I was a humbled man.