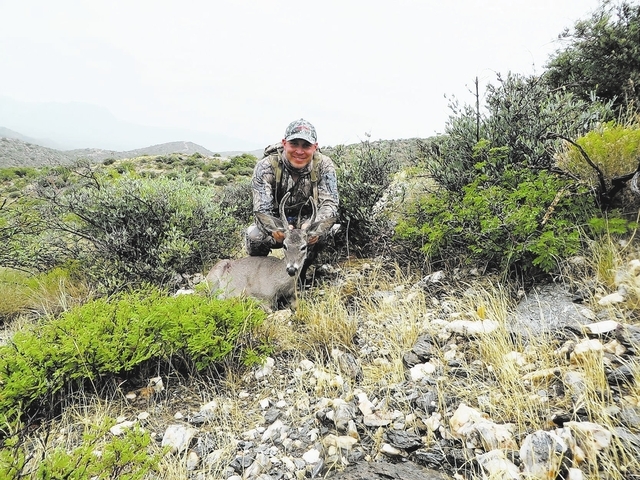 I admire big bucks and the skill it takes to get one: the research, focus, control and patience to pass up the “not quite right” animal, not to mention shooting skills required when you find the “right one.”

It may be necessary to shoot at distances greater than expected. Shooting at distances of 300 yards or more is possible with modern firearms and technology.

There is something to be said, however, for the bow hunter who relies on “spot and stalk” skills to silently close the distance and take a healthy, fair chase animal.

Roy and Shelby Keefer, Andrew Miller, Mallory Genet and Ben Arata are such hunters. They all hunt with a bow and subscribe to the belief that it’s not trophy size, but challenge that makes a memorable hunt. These are my heroes.

All spend many hours, days and weeks in the field each year, for the pure love of hunting. Each animal they take is a trophy — some are just larger than others.

I consider myself a dedicated hunter, if less skillful than this group, and enjoy “closing the distance” as our ancestors and predators have done since the beginning.

Roy and Shelby have demonstrated their dedication by hunting everything from deer and caribou to grizzlies, all with a bow. They have even created a wildlife preserve where they can hone their skills and are able to spend many hours observing wildlife and their habits.

You’ve read of the Keefer’s adventures as well as those of Andrew, Mallory and Ben in previous columns (sportsmansquest.org). All are inspirational and set a standard to be admired and emulated.

Ben in particular, tells a story of his greatest trophy, an Arizona Coues deer. It took him seven trips, three tags and six years to finally fill his archery tag on this diminutive, shy and extremely wary desert whitetail. Some refer to it as the “grey ghost” because of its ability to disappear in the thick brush or ravines and be where you are not.

While on a previous trip, he was able to help his friend Kyle arrow one of these coveted trophies, but on another occasion he was almost run over by a herd of Javelinas while on a stalk. On other hunts he’s been soaked and rained out with the creeks turning to rivers, as can happen with desert flash floods. He has stalked close and been “busted” by the snap of a twig or change in the wind.

On his most recent trip he was again caught in torrential rains. On his final day a buck was spotted at 200 yards, not easy to spot on the opposite side of a ravine; the buck moved, but circled around and came back. He was at 82 yards, but Ben had been practicing and had a sight pin set for this distance. He drew back on the bow, but the “grey ghost” disappeared. Ben then noticed that he had bedded down and not moved away.

Releasing an arrow, the deer went wild and ran over the knob of the hill, but ran back and dropped where it had been shot.

Yep, seven trips, three tags and six years, Ben had what he claims is his greatest, if not largest, trophy ever, an Arizona Coues deer.

The sport of shooting has been revolutionalized by sniper-inspired “smart rifles” using computerized scopes that calculate a complete ballistic solution for long range shots, including range, cant, inclination, pressure, temperature, spin drift, coreolis effect and other factors that effect shot accuracy. The result: extreme accuracy at ranges out to 1,000 yards. The guided trigger eliminates almost all human error from the shooting equation.

The Networked Tracking Scope streams video to phones and tablets allowing collaborative hunting and the recording of video, audio and stills of your shots, ensuring that you always have proof of your trophy hunts. And it’s all easily sharable on your phone or tablet, or via email and social media.

While I’m not ready to use this equipment in a traditional “spot and stalk” situation for deer or elk, it could be of use in eliminating an overabundance of coyotes, wolves or gophers, more efficient than poison and helicopter shooting, and would certainly be fun on the gun range. At $27,000 they are not cheap, but one was recently demonstrated on a cable TV hunting show. Just thought you’d like to know. We call it progress.