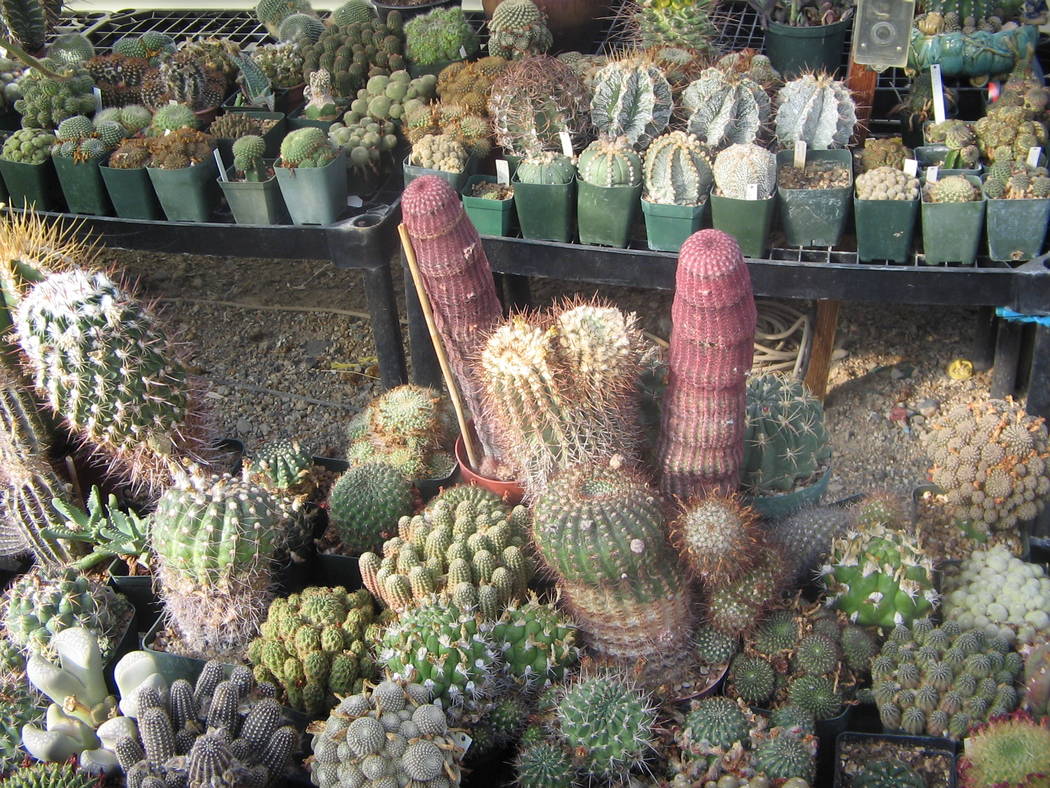 Brenda Klinger / Special to the Pahrump Valley Times Dr. Gerry Henseler also built climate-controlled greenhouses for his cactus plants that are not cold-weather tolerant. He counted 1,200 plants in one greenhouse alone, not including several hundred more growing outside. 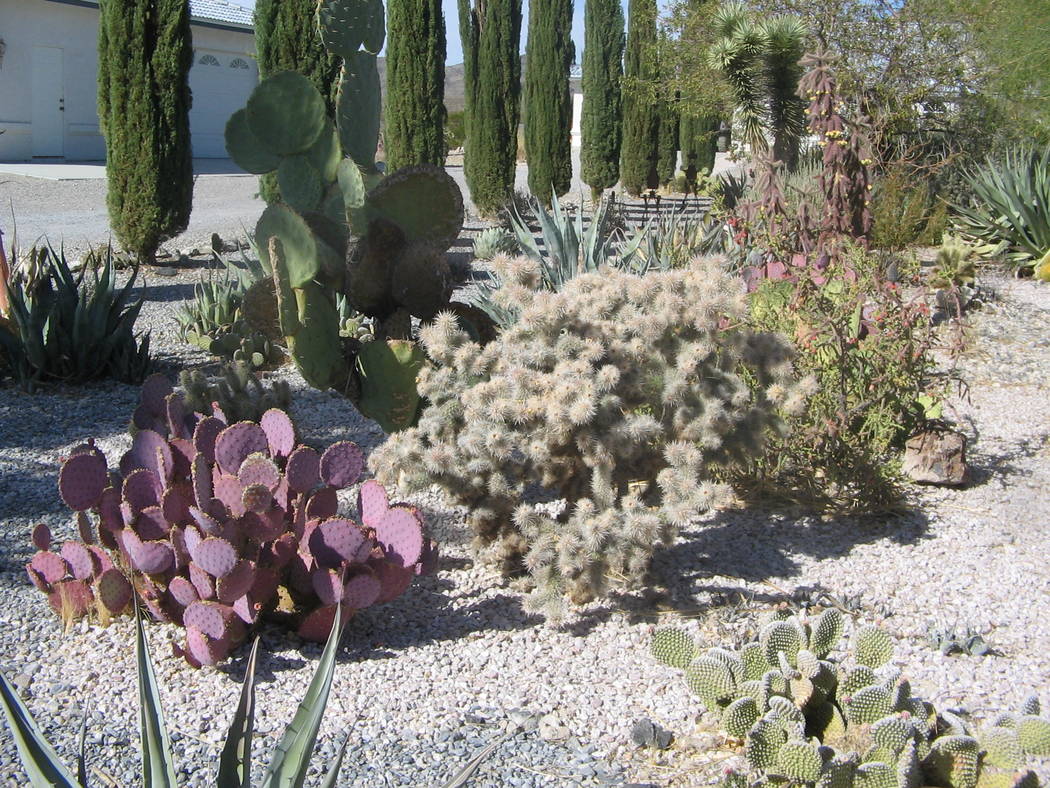 Brenda Klinger / Special to the Pahrump Valley Times An outside shot of more cacti growing on the Henseler property. 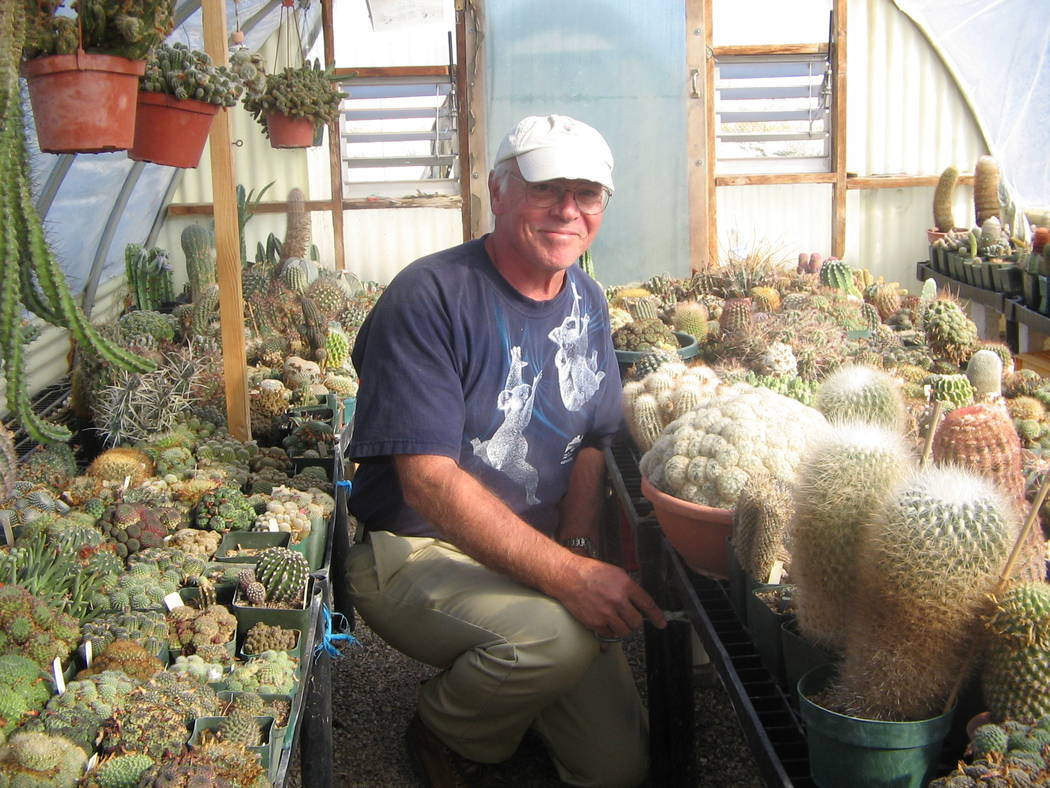 Brenda Klinger/Special to the Pahrump Valley Times Dr. Gerry Henseler in one of the climate-controlled greenhouses he designed and built for his cactus plants. 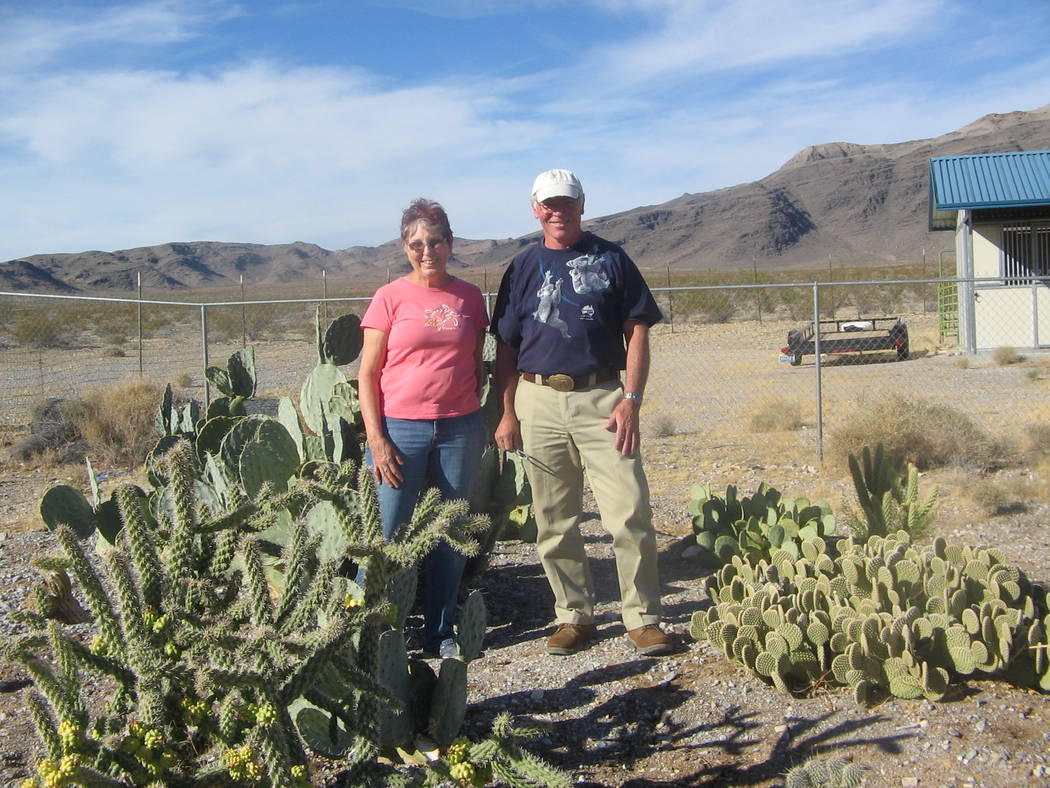 Brenda Klinger/Special to the Pahrump Valley Times ^ Dr. Holly and Dr. Gerry Henseler stand among some of their cacti numbering over 1,000 on their property and in greenhouses. Dr. Gerry Henseler also built climate-controlled greenhouses for his cactus plants that are not cold-weather tolerant. He counted 1,200 plants in one greenhouse alone, not including several hundred more growing outside. Gerry Henseler bought a book on cactus, did research on the Internet, and learned all he could about their genus, species, common names and characteristics.

Pahrump’s Dr. Gerry Henseler could be called the man of over 1,000 cacti or cactuses, depending on which plural spelling you prefer.

Henseler, a well-known local retired large animal veterinarian, counted 1,200 cactus plants in just one of his three greenhouses alone, not including another several hundred growing abundantly on over two acres of his property .

He has more time to tend to his cacti since retiring a few years ago, but his passion with the spiny, prickly desert plants stems back to January, 1999 when he and wife, Dr. Holly Henseler, also a veterinarian, moved to the edge of town.

Gerry Henseler said he did more landscaping, adding trees, including palo verde, chitalpa and other plants which continued to grow and spread out.

He bought three cactus plants from China Ranch in Tecopa, not knowing anything about them. Two died after being left outside in the frost, but he was able to salvage some seeds from one and grow new babies. One of the original three, a Trichocereus genus, survived and still flourishes in his yard.

Henseler bought a book on cactus, did research on the Internet, and learned all he could about their genus, species, common names and characteristics which he can relate and describe in a flash: Echinocactus grusonii (golden barrel cactus or mother-in-law’s seat); Trichocereus hybrid(flying saucer); Opunita engelmannii ( cow’s tongue or prickly pear) as some examples.

Agaves and yuccas, both succulents, also thrive in his garden.

“All cactus are succulents, but not all succulents are cactus,” Henseler added. Succulents are those plants that can store water; a cactus is a specific type of succulent. Cactus have spines, but succulents don’t.

Agaves are also called century plants and grow a long flower spike which yuccas also don’t do. The agaves use so much energy in growing the spikes that they die, but send out a new growth of baby “pups” from the bottom.

Henseler has always been interested in biology, which includes botany and zoology, and they had a large vegetable garden and ornamental plants while living in Wisconsin, but no cactus, except for a Christmas cactus.

The secret to growing such a lush cactus extravaganza is the soil on their property at the bottom of the alluvial fan.

Cacti are easy to grow out here, but Henseler said overwatering is a major mistake that people can make.

“If you’re inclined to overwater, then a cactus is not for you.”

They love water, but need to dry out in between, or they will rot and die; good drainage is important. Unlike roses which are high feeders, cactus are low feeders and don’t need much fertilizer.

Another piece of advice from Henseler is to conduct research to find out if your plants are heat-tolerant in the summer, or need some hours of shade. The same for the winter, learn which ones are frost-tolerant, need covered during the winter, or even placed in a greenhouse.

Cacti have a pretty long life span with some care and luck as long as they don’t rot; plus, they are also low maintenance.

“That’s the nice thing about cactus, you can leave for a week or even two weeks and not worry about them,” Henseler said.