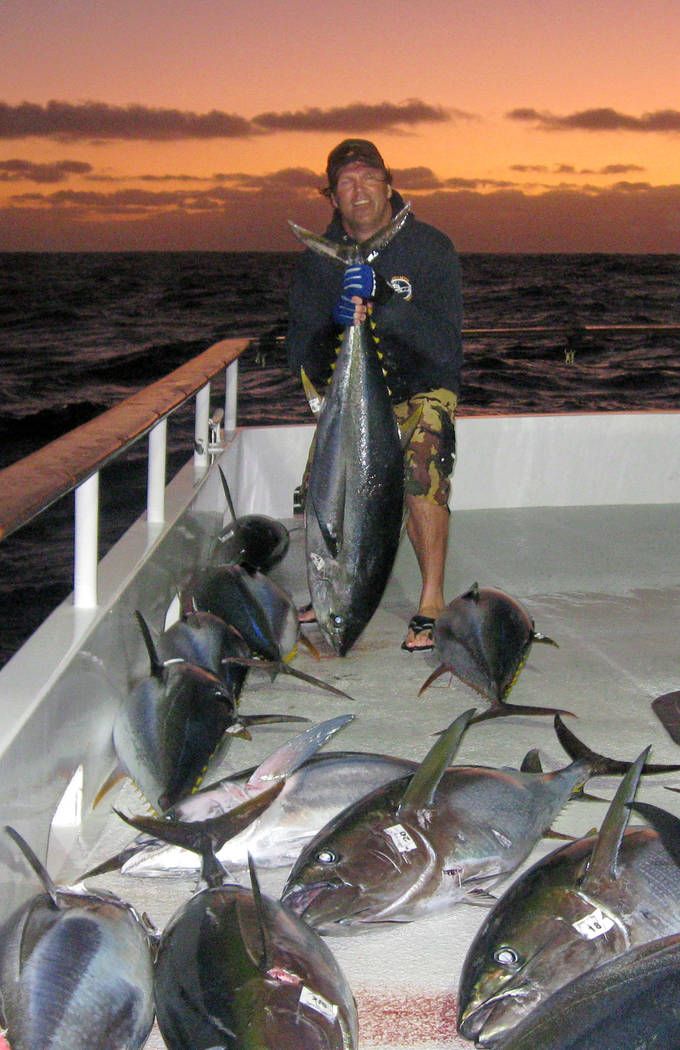 Dan Simmons/Special to the Pahrump Valley Times Drew Calvert is shown with a tuna. On a recent long-range trip to Baja waters, on a tuna boat out of San Diego, the action was fierce with many hundred-pounders coming over the rail.

We all know tuna. It comes in little cans as one of several species: Starkist, Chicken of the Sea or Bumble Bee.

Well, there’s another tuna and the hunt for them is in full swing, or I should say full run; it’s off the California coast. These tuna can weigh over 200 pounds (we call them cows) and have several species as well.

On a recent long-range trip to Baja waters, on a tuna boat out of San Diego, the action was fierce with many hundred-pounders coming over the rail. These weren’t shy fish, but swam in a large school, and believe me, they were the teachers.

A big “cow” would hit like a freight train and either head straight for Hawaii or dive to depths which would challenge the length of line on your two-speed Shimano, Okuma or Fin-Nor #50 saltwater reel.

At other times they would circle the boat as if they knew by tangling with others they could cut the line and break away. Big tuna fishing is not for the faint of heart, but with the exception of bill fish like marlin and sails there are few things that get the adrenalin flowing as quickly.

This is real world-class fishing, but you can take it one step further by fishing for those 500-to-700 pound bluefin that gather off the northeast coast with maximum congregations off the legendary ports of Newfoundland and Nova Scotia, Canada.

For those satisfied with a bit less adventure, and with perhaps more shallow pocketbooks as well, the yellow tail, yellowfin and albacore tuna offer more than abundant thrills. With limits of 20, 30 and 40-pounders coming in regularly, the boats of less extreme range offer two and three-day excursions that are, if not the trip of a lifetime, at least the trip of the year, or even the decade.

These fish are more abundant and the action is non-stop when a school is found. It’s not unusual to bring in several in a relatively short period of time. You’ll not come away unscathed, however, as your arms will feel as if each also weighs 40 pounds and your back and shoulder muscles will scream at you as if to say, “I didn’t sign up for this; I want to go home and back to the couch and television.” At least that’s what mine say.

The options out of San Diego, or San Pedro, are optimal in August when you have the opportunity of seriously targeting several species of tuna, but may also still have a good bite of white sea bass off Catalina Island as well as various cod and grouper species.

A good quality medium-action rod and the best saltwater reel you can afford will be sufficient for all but the biggest tuna and some good 50 to 80-pound braided line will spool you well. It’s best to ask your charter captain about leaders, hook-ups, lures and bait as these will be determined by the area and species fished.

Don’t worry about taking along food as the galleys on these boats are well-equipped and it’s nice to have a wholesome breakfast or quick lunch as the day progresses. On the longer trips it’s usually steak or chicken with all the fixin’s, so forget about the diet for the duration, you’re gonna need the energy.

For up-to-the-hour fishing reports or for charter information go to www.hmlanding.com or www.biggame90.net.