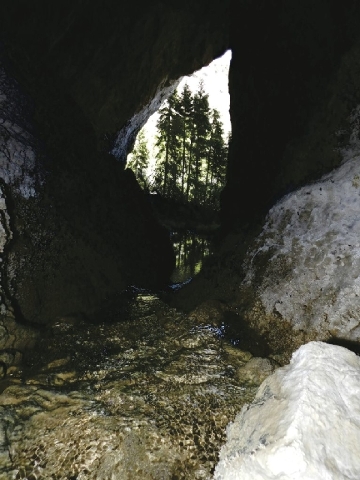 Deanna Stever, Humboldt-Toiyabe National Forest Geologist and Cave Specialist, likes plunging into the unknown. Her husband, Eric Stever, also a national forest employee, is an archaeologist and shares her passion for unearthing treasures. Together, they’re part of a talented and diverse team that is uncovering the caves and their stories across Nevada.

Over the past few years, Deanna has managed a Southern Nevada Public Land Management Act project; Mine Gates, Inc. was contracted to complete 20 cave assessments. The Act allows the Bureau of Land Management to sell land in Clark County and use the revenue for projects in a wide variety of categories.

The cave contractor identified cultural, biological, geological and paleontological resources in completing those cave assessments. Along the way, Mine Gates, Inc., discovered and mapped 36 additional caves and identified 60 leads for future exploration.

Caves also preserve the remains of our prehistoric and historic past, as well as contain data relevant to significant geologic events, climate change and much more.

Say what? “Exactly what they sound like, cave species of flatworms — troglobitic just means these live entirely in the dark parts of caves,” said Deanna.

Hydromagnesite balloons are rare, resemble small gas-filled balloons, and are usually made of hydormagnesite. The balloons probably form when solutions under pressure seep into a cave through cracks or out of porous walls of limestone.

If the solutions combine with “moonmilk,” a highly plastic material, the material may expand like a balloon. The thin coating, which forms the cast, may crack or dry out, exposing the underlying hydromagnesite balloon.

Anthodites are composed of long needle-like crystals, arranged in clusters, which radiate outward from a common base. The needles may be quill-like or feathery. Most anthodites are made of the mineral aragonite.

In addition to the rare cave formations and the flatworms, plenty of paleontological resources were discovered during the cave assessment project.

“Paleontology is the study of life forms existing in prehistoric or geologic times, and is represented by plants, animals, or other organisms’ fossils,” said Eric. Paleontological resources in the cave assessments revealed vertebrate fossils of bat, deer mouse, pika, weasel, birds, marmot, rabbit, wolf, chipmunk, mountain sheep and a shrew.

Dr. Timothy Heaton, University of South Dakota, PhD in paleontology, collected these fossils and is still working on confirming their types of species. “Our caves’ relatively constant temperatures and humiditys help preserve organic materials, and are often valuable sources for fossils,” explained Eric.

He was also excited about a few cultural and geological discoveries found within the caves. “We found a culturally modified stairway that led up to a small alcove.”

He determined the four stairs took advantage of naturally occurring footholds in the cave, but were expanded and deepened either through extensive use or through chipping of the rock.

Given the central location of the alcove within the cave, and the visibility from the entrance, it is assumed this stairway served some ceremonial purpose.

Two flat rectangular quartzite rocks were also found within the cave, one at the base of the modified stairs. These do not contain visible pigment, show little wear, and are not incised in any way. It is also assumed they are related to the ceremonial use of the cave. All artifacts were left as they were found.

“This may not sound important initially, but a second cave was found to contain a corncob,” said Eric. “This cave was excavated extensively in the 1970s, but did not continue into the less accessible portions.

“The corncob was likely brought there by packrats; however, Fremont villagers in the valley to the east were known to grow corn and to cache excess crops in rock shelters and other protected places,” continued Eric. “Further investigation is warranted to determine the age of the corn, and if the cave represents a granary for the Native Americans.”

One way to increase awareness about caves and karst systems is through exciting education adventures. BatsLIVE was created for just this purpose by 30 federal, state and local agencies, educational institutions and non-governmental organizations in 2012.

This free learning program for fourth to eighth grade students and teachers includes live webinars, free education resources to bring bat and cave conservation to life in the classroom, and a live webcast from Bracken Cave, a summer home to the largest colony of bats in the world, 20 million through October, outside the city of San Antonio, Texas. Learn more about this unique classroom opportunity by visiting http://batslive.pwnet.org/.