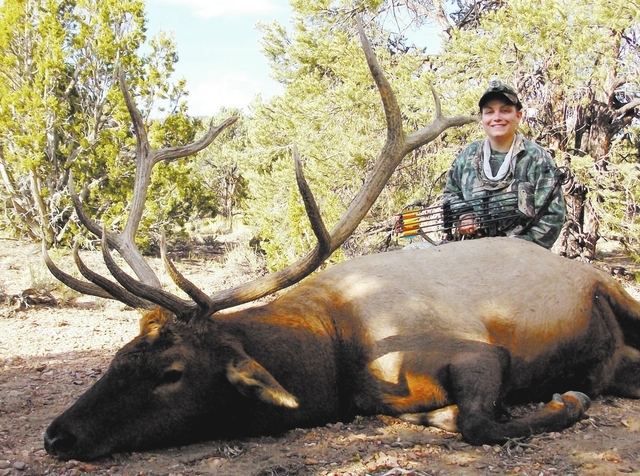 Over the years you’ve heard me tell of Mark and Mallory Genet. The father and his librarian daughter exclusively bow hunt and both have met with considerable success.

I first met them when Mallory was a little 12-year old girl, and Mark joined her in my hunter safety class. My most recent stories of their exploits centered on the search for an elusive antelope they named Einstein because he seemed much smarter than the others in the herd. They both had successful hunts, but Einstein is still out there.

This story is about Mallory’s recent Bull Elk hunt:

It all started with drawing one of the coveted Nevada Elk tags in the Mt. Grafton Wilderness Area. Then it was a matter of getting in shape for a tough hunt. Mallory lost 5 – 10 pounds, strengthened her leg muscles for climbing and arm muscles for drawing her well-practiced bow, but the real exercise came during the first couple of days scouting up and down, and up again, and down the steep mountain terrain. They heard no Elk bugles; “They just weren’t talking,” as Mallory says.

On the third day she told her dad, “I had a dream,” and then she ran up the mountain.

In her dream she was sleeping in her trailer while in a forest, when she heard scratching and scraping on the trailer’s side. She looked out the window and saw a huge Bull Elk; it was calling and taunting her with “Come get me, come get me.” Upon awakening she took the challenge and up the mountain she went with conviction.

They were once again hunting with Shane Stever, of Purple Sage Outfitters, and began hearing Elk bugling. Shane began calling, and a big bull came down the ravine, downwind from them, but winded the hunters and was gone.

Another bull came from the opposite direction with its harem of cows, so Shane began cow talking with him. The bull was greedy and came closer, “Get ready,” Shane said, “It’s a 6X6.” The bull then started circling upwind.

Like a ghost, Shane crept 200 yards up the hill and called the herd back, and in front of the bow hunter. It was 41 yards away and Mark says, “Mallory, pull back.” A cow elk then moves in behind the bull. Mark, knowing the possibility of a pass-through shot, potentially wounding the cow, says, “Hold it,” then “Forget it, take him.” Mallory responds, “Dad, I can’t do it.” I guess those hunter skills classes worked, she wasn’t sure of her shot, and didn’t take it. The wind then changed, the hunters were “busted” and the Elk were gone. That ended the third day, and it was back down the mountain.

Fourth day: Mallory runs up the mountain again, excited; they were hearing bugling from first light.

Mark and Mallory set up a natural blind beneath a large tree with overhanging branches, determining nearby distances by range-finding natural objects, then hunker down and wait. Shane positions himself a few yards behind and begins his amorous artificial cow calling; a bull responds.

They see the bull coming from a mile away, running straight to the call. “Get ready,” Mark whispers, “Draw back.” At half draw the Elk is looking straight at the blind, then puts his head down and moves to the side. Shane calls again as the Elk comes closer. Again, Mark says, “Draw back.” She already had, and cautions her dad, “Calm down.”

At 20 yards the Elk senses something is not right and begins leaving the country. At 31 yards the bow snaps as Mallory shoots from a half-prone position across her dad’s back, and the arrow flies. As if in slow motion (It’s always like that, due to the adrenalin rush) the arrow strikes its mark as the Elk quarters away. Shane responds, “A well-placed shot, a well-placed shot.” The shaft penetrated perfectly, through the lungs, and then lodged in the opposite shoulder. Then as dad settles down and stops shaking, it’s high fives and hugs all around.

They did it all, tracking, checking wallows and Bull Elk bugling while herding cows. All of this, and Mallory’s first Elk. I’m guessing it won’t be her last. How does one go back to the library after that? This is one special gal.

This story is an excerpt from “Sportsman’s Quest-the Book.” It’s available at the Pahrump Valley times, or give Dan a call at 775-727-9777 for more information.

It’s THAT time of the year again! Conventions and Banquets abound. There is something for everyone who enjoys the great hunting and fishing traditions.

I know I will be attending as many of these as I can. It is a great opportunity to meet like-minded people and to learn about some of the newest innovations in the hunting and fishing world.

You can also find great travel deals on trips of a lifetime.

This is considered the Premier Mountain Hunting Exposition in the World. Contact www.wildsheepfoundation.org for more information on this event.

January 25, 2014 the Nevada Sportsmen Unlimited will hold their banquet at the Gold Coast Hotel and Casino doors open at 5 p.m.

There will be guns, ammo, hunting and fishing equipment, and an excellent meal. Bring the whole family, there will be a kid’s raffle also.