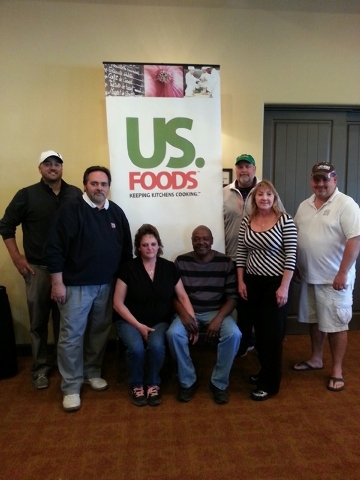 The Mountain Falls golf community opened up their hearts on Saturday for one of their own, the McDowell family.

When Sandy and Gerald McDowell of Pahrump tragically lost their 22-year-old son Jarrell last month, Tom Mazzola, a Mountain Falls employee, was deeply moved and organized a golf tournament to help the family out.

“I put this tournament together,” he said. “It benefited the McDowell family who experienced the loss of their son. I just felt it would be a nice thing for the Mountain Falls community to do for the family.”

Mazzola knows both Sandy and Gerald because both work at the Grill Room at the golf course.

“I just took it upon myself to try to get a few people together to raise some money for this family to help out with some expenses they may have incurred from the funeral,” Mazzola said.

It was more than a few people. The tournament brought out 54 people and raised $3,000 for the McDowell family.

“I was the face of it,” he said. “But it was a group effort. The food was donated by US Foods. The Grill Room staff and the golf course was all provided for. Everything that was raised by the $50 entry fee and the raffles will be turned over to the family.”

Vicki Diaz, the manager at the restaurant provided the staffing and the room.

Food was donated by US Foods through Gary Bently and Greg Moynahan, manager of Mountain Falls, was also instrumental in helping out with the tournament.

Pomroy, gave all the credit to Mazzola.

“Tom Mazzola spearheaded the whole thing along with US Foods,” Pomroy said. “To be honest with you, he really did everything. He hit the pavement and spread the word around the club. People jumped on board and really wanted to support the family.”

Pomroy said a lot of the people that came were pass holders and some people came from Vegas. He added that Mazzola put everything together right after Christmas.

“Tom came to me just after Christmas and he put it together rather quickly. I have to give him a lot of credit. He did a lot. He really did. If he wasn’t involved it probably wouldn’t have happened,” Pomroy said.

The employees that helped out didn’t play golf, but worked diligently behind the scenes to prepare and serve food at the luncheon, which was held for all the participants after the golf.

Jacque Hafen, a golfer and long time resident of Pahrump, attended the golf tournament with her daughter and granddaughter on Saturday. She said she heard about this through Mountain Falls.

“I was so impressed with what Mountain Falls had done for this family,” she said.