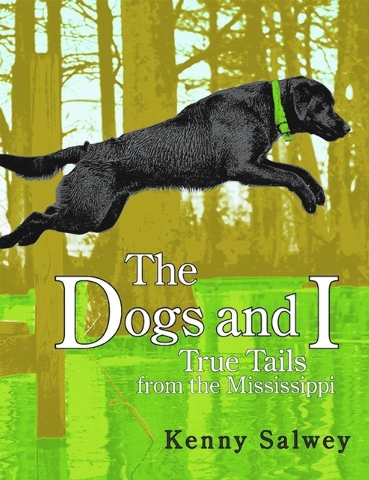 The whole world is your living room.

That’s how it feels sometimes because you don’t know any better place for relaxing than the outdoors. With a shady tree as your easy chair, birdsong as your music, and your dog nearby, you could be outside 24/7.

You and your furry best friend do everything together: hunting, fishing, exploring, observing. And in the new book “The Dogs and I” by Kenny Salwey, you’ll see that man + dog + outdoors = a pretty good life.

When Kenny Salwey was about four years old, he was attacked by a dog — in a good way. The pooch’s name was Brownie, and Salwey remembers coming around the corner of his parents’ house as Brownie knocked him to the ground and “thoroughly washed my face, which no doubt needed it anyway.” That was the first dog Salwey remembers loving, but Brownie was far from the last.

Rover was six-year-old Salwey’s first hunting pal. It was their job to rid the farm of feed-destroying sparrows, and Rover was good at flushing them out. He was also a good fishing companion on lazy summer afternoons, as Salwey remembers.

Teddy, who joined the family later, was a coddled Mama’s boy and Salwey’s mother encouraged it by fussing over the dog. Then along came Pepper, who lived up to his spicy name. Pepper sure made a fine squirrel dog, though.

Once he got out of the army in the 1960s, Salwey — who missed life “on the lovely little farm tucked away back in the hill country” — got a dog as soon as he could. Old Spook was almost a throwaway, but he became a once-in-a-lifetime dog for Salwey: they were hunting companions, fishing buddies, and “inseparable” best friends for sixteen years. It broke Salwey’s heart when Spook died but “Old Spook helped me better understand the great Circle of Life.”

Spike followed Spook, and fish-retrieving Joey Girl came afterward. There was Spider, Travis, and Webster before the travel bug bit the Salweys and they decided against having another pooch. Traveling was a dream come true, but coming and going is hard on a pup.

Still, what’s a River Rat without his swamp dog?

While it’s true that anybody can read “The Dogs and I,” there’s no doubt in my mind that outdoorsy teens — particularly, maybe, boys – will love this book best.

That’s because author Kenny Salwey speaks the language of a lover of the land. Salwey’s words are thoughtful and earth-kind, evoking old-time sentiments mixed with modern sustainability. Every duck or pheasant hunter who owns this book will think of his favorite hunting spot as he reads; every fisherman will recognize the feeling of knowing something’s been hooked; and both will remember their own four-legged companions, without whom the sport is just no fun.

I think outdoorsmen (and women) ages 13-to-17 will love this book, and they can easily share it with their dads and granddads, too. For hunters, fishers, and lovers of Labs, “The Dogs and I” is a world of good reading.