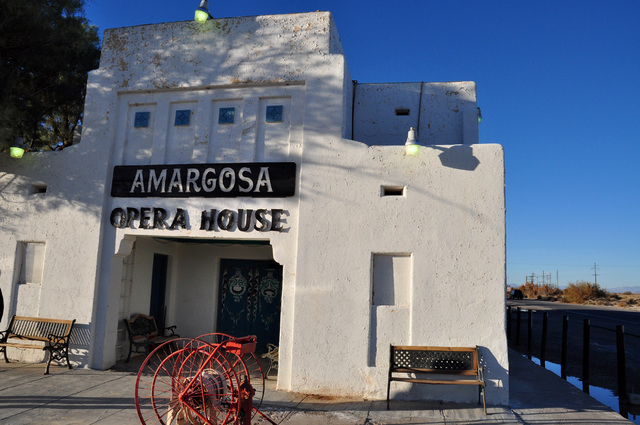 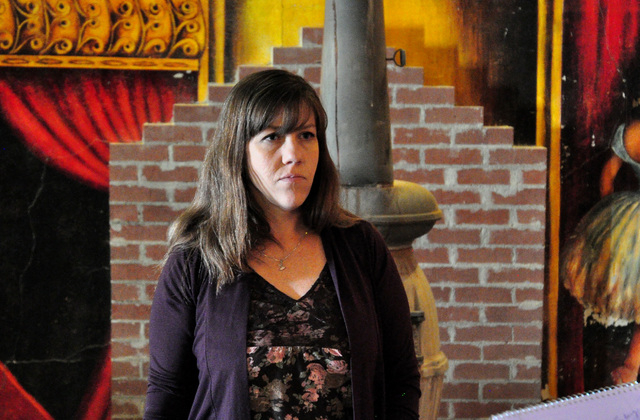 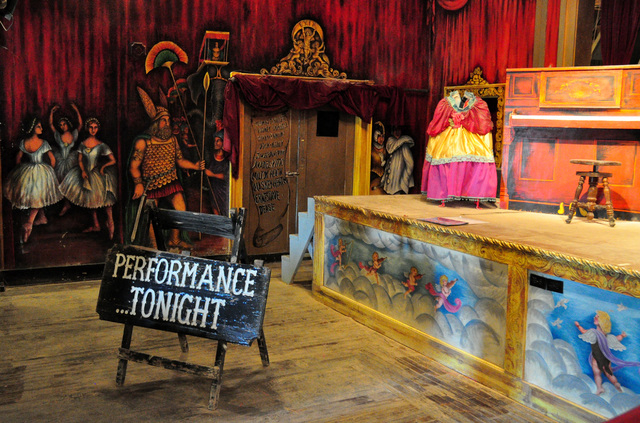 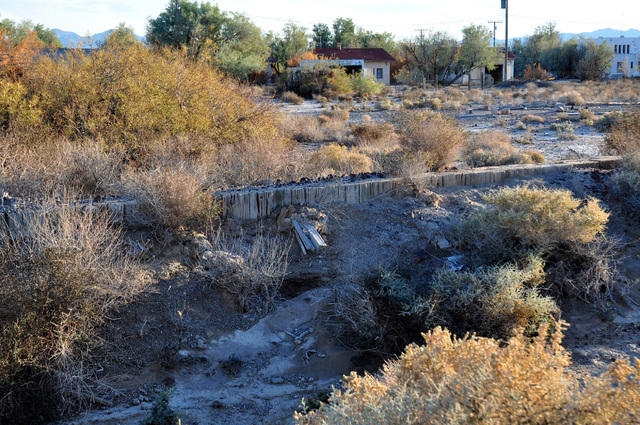 DEATH VALLEY JUNCTION — Marta Beckett, the desert queen of dance and her town of Death Valley Junction seems to roll with the punches. Bad weather during the summer monsoon season severely damaged the Amargosa Opera House, forcing it to close for several months and now its doors are open once again.

In July the monsoonal rains took out the small earthen levee that protects the town of Death Valley Junction.

At first, things looked grim for the historical landmark. The flood had warped a lot of the flooring in the opera house and brought with it about six inches of muck which also covered the surrounding grounds.

Volunteers descended upon the property just days after the flood damage. All the repairs were made with exception to the flooring in time for Becket’s 90th birthday celebration.

Rhonda Stone, Death Valley Junction town manager, said it took some time to find someone to do the repairs for a minimal amount.

“We were able to find some spare flooring material on the property and that saved costs too. We will now open the doors to performances once again,” Stone said.

The first performance at the opera house since closing will be on Dec. 26 and Dec. 27. The evening performance will be at 7 p.m. and there will be an afternoon show at 2 p.m. Tickets are on sale for $20 per person. The headline performer will be Jenna McClintock from Oakland, Calif. She is a 39-year-old professional dancer who has studied some of Becket’s work and she will be recreating some of Becket’s material. Stone is not sure how long she will do the show.

Becket had been slowly making a comeback in 2013 where she did some performances on the opera house stage, a stage she built with her own sweat and tears. Her show was called “The Painted Backdrop Show,” in which she is the only actor. Stone said she can possibly return shortly to the stage in 2015.

“I think she is looking to do it again sometime in the new year, but I can’t say for sure,” she said.

The most important repair the volunteer crew made after the flood was to the earth levee just north of the property. Brian Wulfenstein of Wulfenstein Construction in Pahrump, had lent the crew a skip loader to make repairs to the damaged levee that had collapsed. The levee is about three feet tall and three feet wide and usually does a good job of keeping floodwaters from the mountains that surround Death Valley from flooding out the town.

Last week’s rain that hit Pahrump also went through Death Valley Junction, but because of the levee repairs, the old town was kept dry.

A grant writer is now currently writing a grant so that major repairs can be made to the town and its aging buildings.

Stone said a lady who had visited the opera house has agreed to take on the project.

“She is a student in the San Francisco Bay Area and has taken on the project so that we can soon submit our grant proposal to various foundations,” Stone said.

Stone believes it should only take about another 30 days to finish the proposal.

Another way the hotel has been staying afloat is through its sordid past. Long before Becket came here there were the people who put Death Valley Junction on the map who worked for the Pacific Coast Borax Company. Many believe some of those people still haunt the premises. The ghost tours at the Amargosa Hotel have returned. Guided tours are $25 and $100 for private tours.

There was a brief period that the tours had stopped. Becket believed things were getting out of hand because the previous management had allowed people to pay for ghost hunting privileges that were unguided. All tours are now guided.

“Marta really doesn’t really like people to concentrate on the ghosts,” Stone said. “She has worked hard to create a world of art of the past. And that has nothing to do with ghost hunting. I think this is something that was sought after by previous managers. And now we are working with Marta and her new parameters. After Halloween she did make the decision to open up tours to Spooky Hallow.”

Stone said the hotel got calls all the time for tours so this was a compromise by Becket.

“People would see the TV shows (ghost hunting shows) and we would get calls from people mainly in Las Vegas,” she said.

Stone said she has never seen a ghost, but she has sensed some energy on the property.

Kathy Cheney runs the ghost tours and works the Amargosa Hotel office and she said she doesn’t disbelieve in spirits.

“I got into the ghost tours because I am the only one that will go into Spooky Hollow at night. Everyone else is just leery of going out there. I enjoy giving the tours and hope one day to see a ghost,” Cheney said.

Spooky Hollow is in the back of the hotel and was part of the original 23-room structure. Now the rooms are in disrepair with no immediate plans to remodel them. The rumor is that numerous guests and employees had died in some of the rooms, hence the name. One person supposedly committed suicide by hanging and Cheney said there were two murders there, but there is no known historical document that can substantiate these claims.

Cheney said she has had some experiences at the hotel, which she couldn’t explain. The other day she was walking down a deserted part of the hotel. They had no guests there and she smelled an odor of Bengay. Also one night while she was out by herself in Spooky Hollow she smelled the odor of burning wood in a room.

Of course other people besides Cheney have had experiences at the Hotel. James Horton, a local Pahrump film maker, spent many months filming at night in Spooky Hollow for his film “Do Not Disturb,” a horror movie which takes place at the hotel. “I have been physically touched and many of the cast members had experiences while filming there,” he said at the soft opening of “Do Not Disturb”. “It took some time to get used to the creepiness of the place, but by the end of filming I was comfortable doing shots there by myself.”