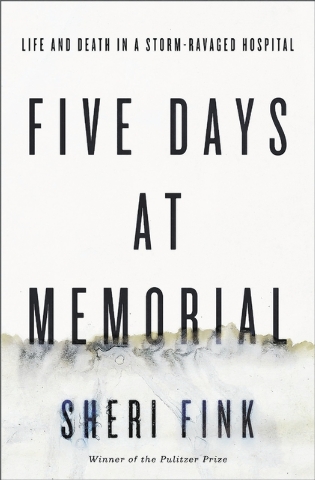 You know exactly what you’d do.

You’re prepared with a drill, if the house catches fire. In case of gunfire, you’ve got a plan in mind. You’ve watched TV coverage of crimes, disasters, and floods enough to have envisioned how you’d react to each of those.

You know what you’d do in a crisis – or do you? Could you ignore your inner voice and do something wrongly right? That’s what allegedly happens in the new book “Five Days at Memorial” by Sheri Fink: one of our country’s worst disasters may’ve led to one of medicine’s most questionable acts.

When Southern Baptist Hospital opened in New Orleans in 1926, its founders hoped it would be “the greatest hospital in all the Southland.” Indeed, it had the sturdiest of buildings: when Hurricane Betsy hit in 1965, the campus barely blinked.

There was no reason, therefore, to believe that the hospital (renamed Memorial Medical Center the mid-1990s) couldn’t withstand Hurricane Katrina.

As Katrina approached land on August 28, 2005, there were as many as 2,000 people at Memorial, including staff and families, 183 Memorial patients and 55 patients belonging to LifeCare, a “hospital within a hospital” that rented facilities at Memorial. There were also hundreds of staff-owned pets inside, for safety’s sake.

At first, the atmosphere was light-hearted. It was obvious by the “little shimmy shake” of the floor-to-ceiling windows and the devastation outside that the storm was dangerous, but staff was optimistic.

And then the levee broke. Water poured into the building, the hospital’s generators became waterlogged, air conditioning failed, and the temperature skyrocketed inside. Plumbing shut down, and fetid odors wafted through each floor. Evacuations were denied (or sporadic), whispers of “martial law” circulated, and optimism waned as the sickest patients became dehydrated, overheated, delirious. Nurses scrambled to keep people alive in conditions that deteriorated almost by the minute.

When it became obvious that pets mightn’t be evacuated, some staff tearfully requested that beloved companions be euthanized. A few nurses wondered if they would ever leave Memorial alive.

Inflammatory? You bet. And the subject of a months-long, post-Katrina investigation, all of which author and Pulitzer Prize-winning author Sheri Fink details in this huge, totally absorbing book.

“Five Days at Memorial” begins with tip-of-a-shark-fin anxiety and quickly descends into chaos, which perfectly displays a mere taste of what happened to the survivors you’ll meet here.

That’s the first half of this book, before Fink’s story turns into something conversation-worthy, something that (admit it) everyone’s reluctantly thought about. From there, and during the legalities that Fink recounts, readers have a front-seat view of finger-pointing, tracks-covering and fact-finding that also became policy-changing.

Once you start it, it’s hard to let go of a book like this because the memory of what happened is still awfully fresh. Like the events surrounding that week, eight years ago, “Five Days at Memorial” can’t be forgotten — so reading it is exactly what you should do.