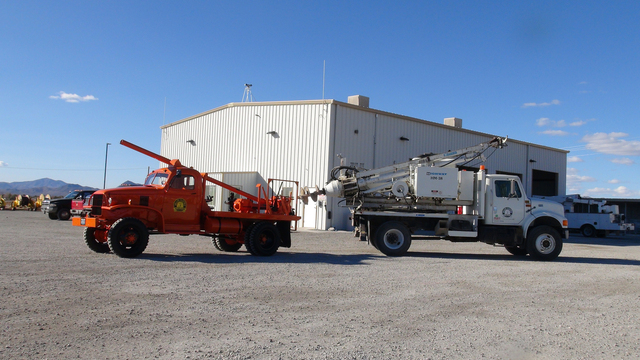 The Pahrump Valley Museum held another lecture in the series with guest speaker Thomas H. Husted, CEO for Valley Electric Association. The presentation room was almost filled to capacity with individuals interested in the history of the cooperative’s struggle to bring electrical power to the rural areas of southwestern Nevada.

Pahrump Valley Museum’s Phil Huff introduced the speaker and presented him with an award from the museum for top local executive.

Husted gave a summary of where the co-op is currently standing via a slide presentation that he used throughout his storytelling presentation and said he was “honored to have served VEA for the past eight years.

The company has currently $314 million in assets and expects to reach $340 million by the end of the year. The co-op also has $72 million in annual revenue.

“We have doubled our size and increased our revenues by over $20 million annually. We are building a new campus expansion and expanding our transmission facilities. We have rate stability and are able to do all that without raising rates.

“Within our financial forecast today we’re looking at almost a decade of rate stability. We are excited about where our future is going and when we look at our past it is results-based analysis,” said Husted.

Husted then turned his presentation back to the beginning — before there was distribution of electricity through transmission lines — when the first farmers in Amargosa Valley used generators to power their farms.

Franklin D. Roosevelt changed history by signing an executive order on May 11, 1935, which created the Rural Electrification Administration (REA), a branch of the U.S. Department of Agriculture charged with lending money to help get electricity to rural areas. Prior to the creation of the REA there were about 50 electric cooperatives nationwide, concentrated heavily in the upper Midwest.

Husted’s presentation focused on the struggles to get electricity to the rural area of Amargosa Valley and Pahrump. The REA criteria had to be met in order for the co-op to become a viable entity.

When Husted was asked how he perceived the co-op’s future. He said, “Valley Electric’s future looks very bright. No pun intended. We are doing very exciting things. We are proud of the fact that during the greatest recession this country has ever faced, this co-op has found a way not only to continue to move forward but to move forward at a pace that is beneficial to our utility and our members.”

The audience was appreciative of VEA’s history.

“I realize how hard they worked back in the past to get what we have today. We really appreciate it,” said Jan Duarte.

Another attendee, Art Jones, commented, “It was very interesting. I have no knowledge of the history of co-ops. The speaker said, you could ‘do wonders in numbers’ and that’s what happened for us to become the co-op we have.”