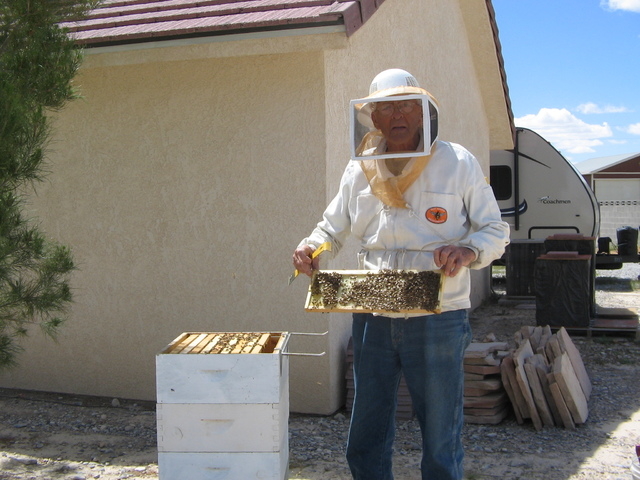 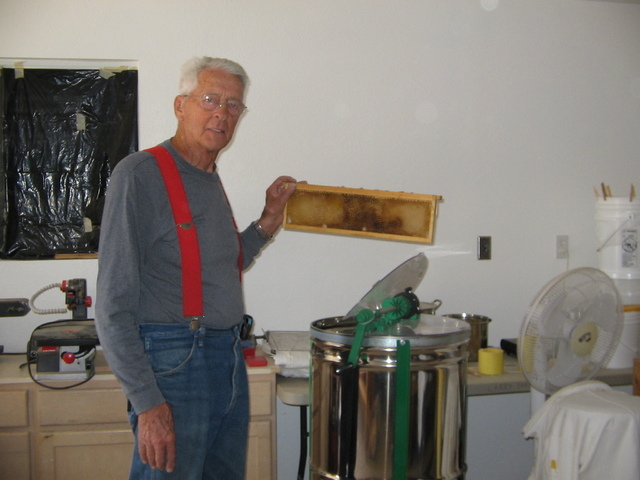 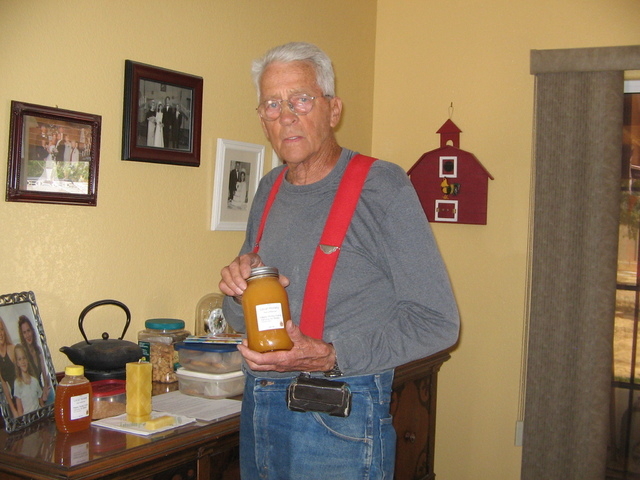 To be (bee) or not to be (bee)?”, borrowing the phrase from Shakespeare’s “Hamlet,” Larry Shreffler of Pahrump would probably answer “to bee.”

He is a hobbyist beekeeper who has been dabbling in keeping bees since the 1970’s when he lived in Ohio and started with four hives and a book about bees. As he moved around the country with his wife and kids, he sold those hives. It wasn’t until Shreffler made his way to Las Vegas that he started beekeeping again with two hives and later expanded to the current number of 10 here in Pahrump.

“You know, I began reading about all the problems they’re having with bees and how they’re dying off,” Shreffler said. “You know they encourage people to have bees to replace the ones that are dying off.”

One of the problems plaguing beekeepers, especially commercial ones, is colony collapse disorder. This mysterious condition has been under investigation by researchers for several years. Basically, a healthy thriving hive will suddenly become empty. There may be honey left in the hive, but no bees.

Shreffler says a variety of factors could be the cause such as pesticides, or a varroa mite which pierces a bee between segments on its back and then spreads diseases similar to the way a mosquito spreads diseases in humans.

Other problems bugging beekeepers are the so-called “killer bees” which Shreffler said is media a term blown out of proportion. “Africanized bees” is the preferred term. Those bees from Africa were brought to Brazil back in the mid 80’s because scientists were experimenting on how to produce a better honey bee. Some of those bees got loose.

“Those bees, they swarm more often and so that makes them spread more-faster,” he said. “So, they spread all up through South America. They’re here now, California and all the southern states, there’s those Africanized bees.”

According to Shreffler, they’re not impossible to work with and he does so by wearing special clothing and gloves. If they are stirred up, they will come “boiling out by the hundreds” and attack you, which he has had happen. He explained that there have been animals like dogs and horses penned up that have been killed by the Africanized bees. Being confined, the animals could not get away from the bees.

Also, people have been attacked and killed. His advice, if you get attacked, run “straight away” from the bees without swatting them. Pull clothing up over your face and run until they leave you, don’t stop.

To counteract these aggressive Africanized bees, Shreffler, as a responsible beekeeper, brings in tame bees to “dilute the gene pool.” When a new queen breeds, there’s more than just Africanized bees for mating and the other bees eventually die off. According to Shreffler, a worker (female) bee lives about six weeks in the summertime. The male(drone) dies right after mating.

Shreffler recently brought in two Italian queen bees, which are known to be kinder and gentler, to requeen his hives. They were shipped via UPS overnight express from a bee supply company in California. Shreffler had to go through the hives, get rid of the old queens and introduce the new store-bought ones to the hives. The bees pick up on the new queens’ scent, or pheromones, and eventually accept them which helps rid the hives of the former Africanized bees.

He has also been summoned by some businesses and housing developments to get rid of and rescue bees which took up residence in places where they were not welcome.

He “smokes” his bees with a bee smoker containing burnt pine needles to calm them down. The needles emit a good smoke that helps to cover the bees’ “ alarm scent.” Shreffler said the smoke may make the bees think there is fire and they will fill their honey sacs for a food supply in case they have to leave. They are not able to sting when their abdomens are full of honey, and they are more docile in this state.

Shreffler respects and appreciates the importance of honey bees to our environment and agriculture industry.

“Honey bees, they say, pollinate about a third of the food you eat,” he said. “You know they pollinate almonds, watermelons, muskmelons, strawberries, blueberries. The commercial beekeepers they haul their bees around to pollinate all that stuff. So, if we didn’t have honey bees, if they disappeared, some people claim we would disappear in a few years. Your diet would get awfully bland.”

Shreffler also sells honey when he has a good supply of it, mostly in the fall, at the local farmers market run by the University of Nevada Cooperative Extension’s Master Gardeners in the Draft Picks parking lot at 1101 S. Highway 160 on Saturday mornings.

Shreffler’s wife, Donna, doesn’t really participate in the beekeeping practice, but she supports her husband’s fondness for the bees.

“When he’s working the bees, I shut the door,” she said laughing. “You know we’ll go down to the garden to pick vegetables and sometimes they come down there you know, so then I’m outta there.”

Even though she is not a fan of honey, she has used it in making baklava and said it can be used in many recipes. Other bee products include soap, candles, and lip balm. The pollen collected from beehives is said to be beneficial for allergies.

Shreffler recently traveled to Reno to meet with members of a bee club there. He would like to see a beekeepers club formed here in Pahrump so he could connect and network with others interested in the hobby.

“Honey bees are the only thing, or whatever, that they take nothing and they destroy nothing and they give honey and stuff that you can take from them. But in the process, they don’t take anything.”

For more information on beekeeping and the benefits of honey and other bee products go to: www.americanbeejournal.com, or honeyacres.com.