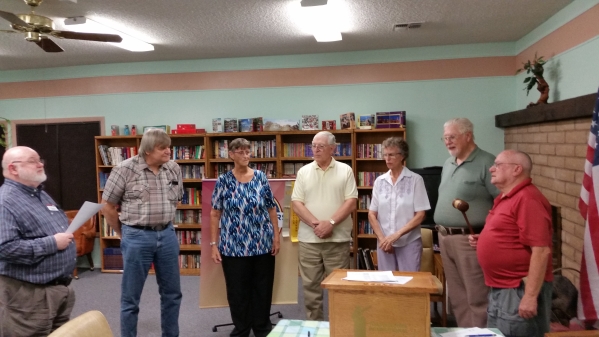 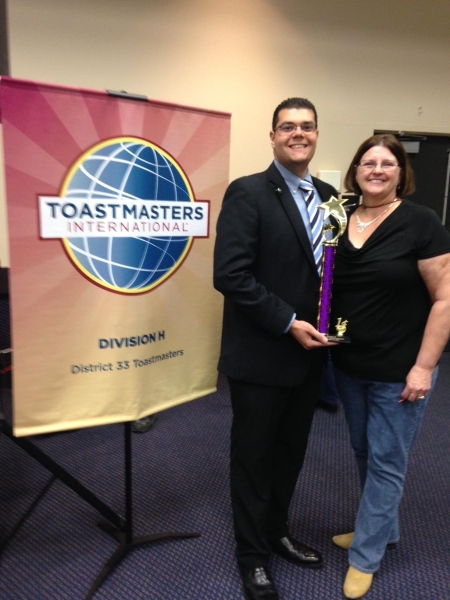 Jim McMurray used to struggle speaking in front of work peers and Sunday school classes in the late 1960s.

McMurray said his boss recommended a club called Toastmasters since McMurray had to conduct training, admitting he was not good speaking in front of a group.

Toastmasters changed his entire life, both at work and church, helping him as a Sunday school teacher and enabling him to pray in front of people.

Toastmasters is trying to find a rebirth in Pahrump as the club enters its 18th year in the valley.

The club is part of Toastmasters International, whose mission is to “empower individuals to become more effective communicators and leaders.”

McMurray is the only remaining charter member from the group’s chapter founding in 1996. There was not a local club when he moved to Pahrump. He first joined Toastmasters in 1970 while working for Douglas Aircraft Company in Santa Monica, California.

McMurray credits the late Sally Devlin and Kay Collis, who still an active Toastmaster in Las Vegas, as the original founders in 1998 with 18 members.

That’s when the Pahrump Toastmasters officially became a club under its present name from the previous Goal Setters.

Today the local chapter is working to grow from its current base of 10.

Members give speeches during meetings on a variety of topics while timed. The speakers are evaluated by their peers to improve and sharpen their public speaking skills. He said the leadership of past presidents Donna Lee Laduke and Pamela Raneri has kept the club alive.

“The big thing I would like for young people to see is it will make a difference in their life,” McMurray said. “It’s not only learning to speak, it’s learning to listen and to evaluate. So, when people are talking, you begin to realize, I evaluate what they’re saying and why they’re saying it,” he said.

You have to be 18 to join and McMurray thinks it is better than any college course someone could take.

You also become a better listener through Toastmasters according to McMurray because as an evaluator you learn to listen to what people are saying and decide whether or not they are organized in their speech.

McMurray, treasurer and education vice-president, wants to increase membership so they can conduct training courses in the community, especially for high school students. He said they would need at least 20 members to accomplish this.

Pamela Raneri joined Toastmasters along with her husband, Phil, who was stationed at Edwards Air Force Base in Southern California. She, too, and said it helped change her life after undergoing multiple eye surgeries and not feeling good about herself and her appearance.

“I finally decided that Toastmasters did not care what I looked like, what they cared about was what I had to say,” she said. “So I always say Toastmasters is not necessarily going to cure all what ails you, but it’s going to go a long way to making your life a lot better.”

The Raneri’s son was working on a communication badge for his Eagle Scout project and joined the Toastmasters club on the base. They were so impressed with their son’s success in giving speeches, Phil joined the club in 1984; Pamela signed up two years later and they’ve been active ever since and continued their affiliation with the organization after moving to Pahrump.

Toastmasters has gone full circle for the Raneri family since their son is now a Toastmaster area director for a club in Texas and their daughter is involved with a Toastmasters corporate club in California.

New members to Toastmasters don’t need to be intimidated by speaking before the group. There is a manual of ten speeches to help and each beginner is assigned a mentor to guide them according to Pamela Raneri, club secretary.

“It’s pretty self-explanatory once you get the manual, and it is just like going to school, though; you get out of it what you put into it because it is an educational organization,” she said.

“If you are interested in just learning how to speak or just learning how to communicate with the person that’s across from you, this is the perfect thing because you get a chance to do it at the club and everybody’s there for the same reason,” Phil Raneri, club vice president of public relations said. “So, therefore, everybody chips in. In other words, they’re all there trying to help you, we help each other so that the communication does wind up coming out.”

He added that it’s easy to pick up a few speeches from topics that you like.

“Well, I’m a ham and I love to be up in front of people talking and I’d always wanted to be in Toastmasters, but I was so busy with work before I retired,” Johnson said.

He now wishes he had joined sooner since it has been so helpful to him.

“I understand a lot more of what people tell me now,” he said. “And I’ve gotten so I can get their feelings behind what they are saying and that makes it easier to understand the people.”

According to Johnson, Toastmasters has different categories of speeches including humorous, informative, demonstration and at every meeting they have impromptu speeches. Members randomly select a “table topic” and speak for about 90 seconds, with no prep time.

Most of the speeches are 5-7 minutes in length and are timed. It’s all part of the training to be disciplined in speaking so individuals don’t ramble on and on.

David Jaronik, club sergeant-at-arms, has been a Toastmaster for about six years.

“It can advance you in whatever career you’ve chosen in life,” he said. “It will advance your relationships, in general, with other people because it’s so interesting that you learn from all the other people. Everybody comes in with their own views of the world and you get to express them and you learn, you learn many things.”

Aside from speaking better, Jaronik said he learned how to study better, conduct research and how to listen better.

True to the name, Toastmasters did help Jaronik when he had to give a toast at his son’s wedding, calling it “a wonderful teaching aid.”

Leo Blundo has been a member of the Pahrump Toastmasters Club for less than six months and he has already won awards .

After winning at the local club and area levels, Blundo went on to win top honors in the evaluations category at the divisional level held recently in Henderson. Blundo had to listen carefully and evaluate a speech given by another person in a designated amount of time.

He said other than meeting “incredible people and opening doors”, there is such a leadership component to Toastmasters.

He recommends that anyone running for public office or operating a business should join Toastmasters. Before he joined the club, Blundo said he used to just “wing it” whenever he spoke.

“This absolutely puts a polish on winging it,” Blundo said. “This is like that next step, that next level. You have somebody that’s got a natural gift, where they are able to talk and communicate with people. This makes it so when you’re talking and communicating with people, you’re able to communicate a clear, concise message to folks, or articulate and be able to think on your feet a little bit more. It really brings that polish through to people with a natural gift.”

Blundo added that the group is not about criticizing and ridiculing any of the members. They don’t like to call it criticism, but rather growth and recommendations when they critique each other.

According to its website www. toastmasters.org, “Toastmasters International is a world leader in communication and leadership development” with over 332,000 members in 15,400 clubs throughout 135 countries.

The Pahrump Toastmasters Club meets the second and fourth Thursday of every month at 7:00 p.m. at the Comstock Park Clubhouse, 151 Comstock Circle, off Highway 372. Contact Jim McMurray at 775-751-1480 or Frank Johnson at 775-727-0578 for more information. They are also on Facebook at Pahrump Toastmasters.

Pamela Raneri said the group is very friendly and welcomes visitors to their meetings.

“It’s a good atmosphere to learn even when you’re really scared,” she said. “I think that it has value and I think we have a lot to offer the town of Pahrump – just get the people here.”